A young woman who suffered 90% burns as a baby has found love at last and is to marry her ‘best friend and soulmate’.

Terri Calvesbert, 23, who now lives in Halstead, Essex, was horribly injured when she was 18-months-old in a devastating blaze at her home in Ipswich, Suffolk.

Doctors at first feared she would not survive after being left her with no hair, lips, nose or fingers, and just one foot.

But Terri’s bravery story captured the hearts of the nation, and she underwent more than 50 operations to help repair her torched skin.

Now, more than 20 years on, she has embraced her life and is to marry her partner Richard Holmes, 43, this summer. 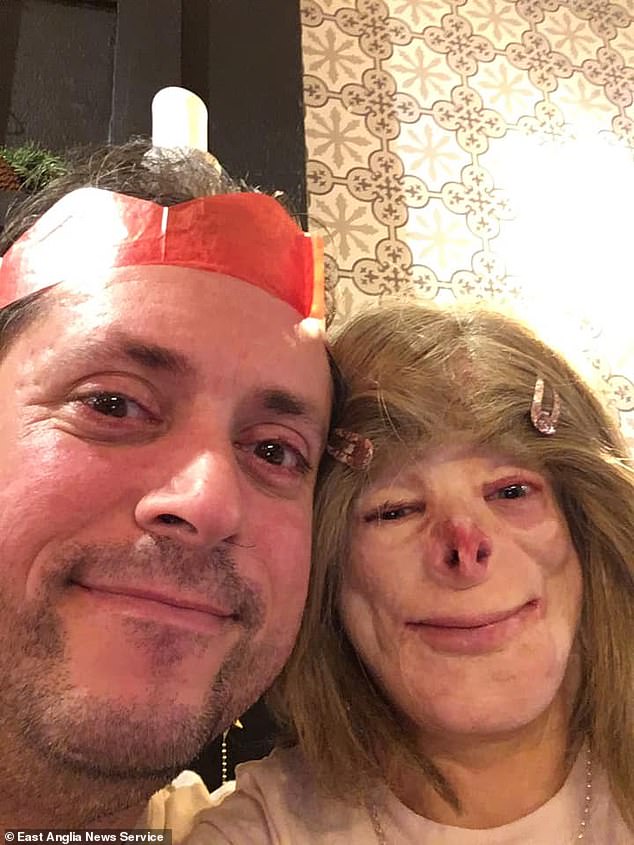 Terri Calvesbert, 23, who now lives in Halstead, Essex, who suffered 90% burns as a baby has found love at last and is to marry her ‘best friend and soulmate,’ Richard Holmes, 43 (pictured together) 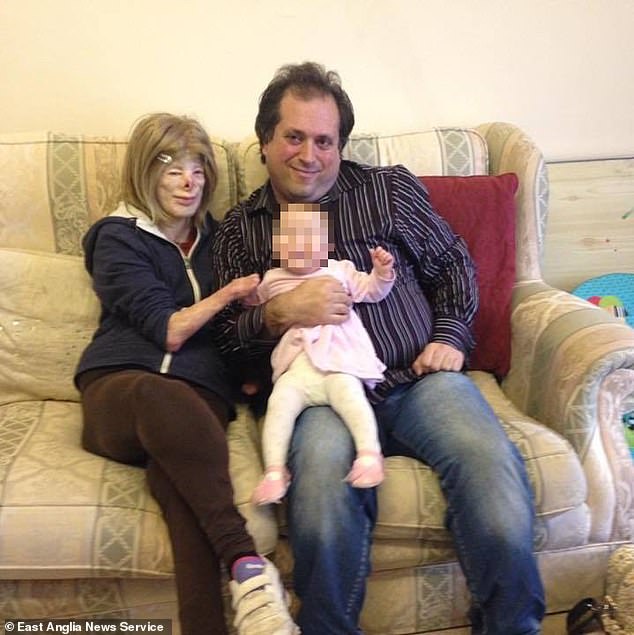 The couple of Halstead, Essex, have spoken of their happiness and their plan to marry this summer (pictured together)

Terri who has won numerous awards for her bravery described her fiancée as ‘the kind of man everyone wants’.

She said: ‘He is everything to me. He’s my best friend and soulmate.

‘I’m really excited about the wedding. Obviously I’m going to be nervous on the day but I can’t wait to be with my friends and family.

‘I’ve always wanted to get married but I never thought this would happen at my age, especially to me.’

Terri suffered her burns after her mother Julie Minter accidentally left a burning cigarette near her cot late at night in their Ipswich flat on November 21, 1998 Firefighters who found her lying in her cot initially thought she was a black plastic doll.

She spent six months at the St Andrew’s burns hospital in Chelmsford, Essex, and became one of a only handful of people in the world to survive such extensive burns to her body, requiring more than 40 skin grafts. 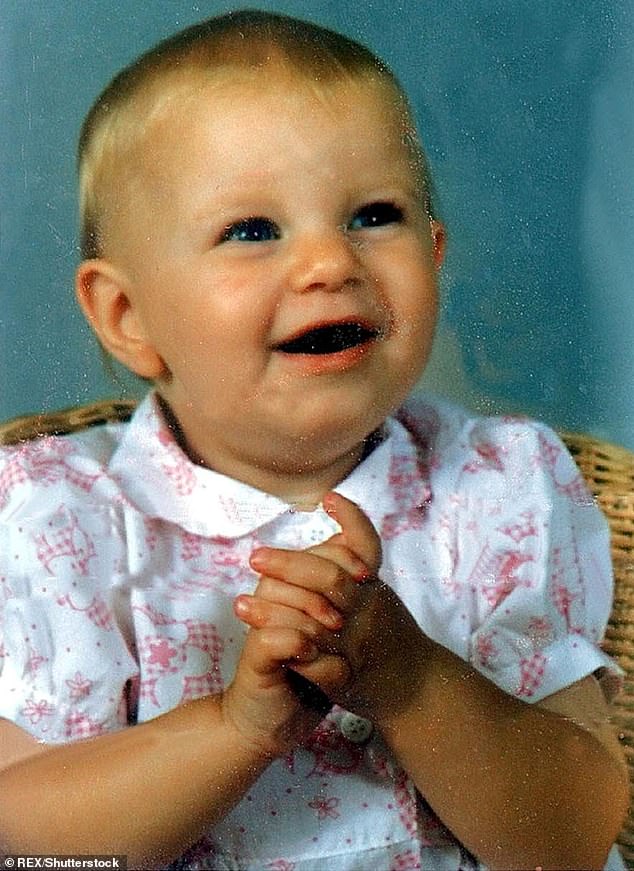 Terri Calvesbert suffered 90 per cent burns in a devastating house fire. Pictured, as a baby before the fire 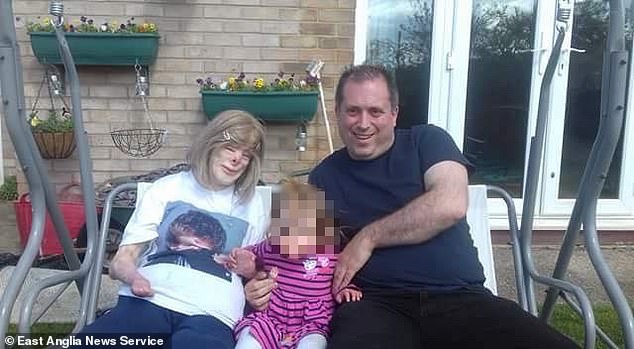 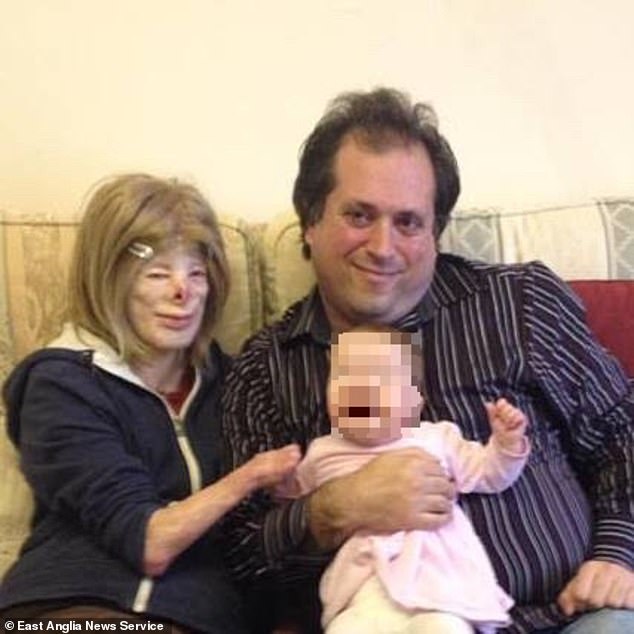 Terri said she is going to be nervous on the day but is excited to be with her friends and family. She added: ‘I’ve always wanted to get married but I never thought this would happen at my age, especially to me’ (pictured, with Richard)

Terri was brought up by her factory worker father Paul Calvesbert who had split up from her mother two months before the fire.

Her mother was left wracked by guilt and suicidal over the fire and did not see her for ten years. The pair had an emotional reunion when she was a teenager.

Terri said she would never truly know what happened on the night of the fire as she was too young to remember.

But she admits that she ‘doesn’t know any different’ about her physical appearance.

‘When it comes to that night in November, I kind of get a horrible feeling inside,’ she explained. ‘But that’s the only time it really affects me.’

‘What happened does stay with me, but I’m really proud of myself for what I have achieved.’

Terri met Richard on Facebook around five years ago and says that they ‘hit it off’ instantly, establishing a strong connection and falling in love.

Whilst she was studying animal care at Otley College near Ipswich she fell pregnant with their daughter Poppy-Mae, now aged three.

Terri who now lives with Richard in Essex, described her as their ‘miracle’ child, although they are keen to keep her away from the limelight. 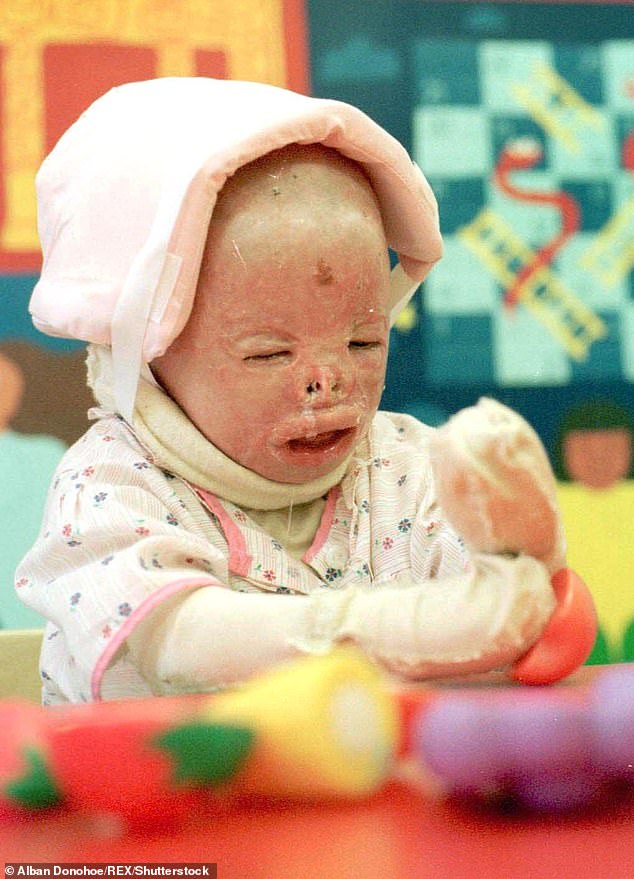 Terri spent six months at the St Andrew’s burns hospital in Chelmsford, Essex. Pictured, as a baby after the fire 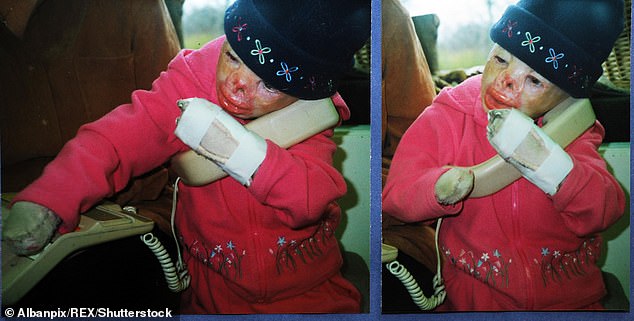 Terri required more than 40 skin grafts and is one of only a few people in the world to survive such extensive burns. Pictured, aged three

She added: ‘It’s scary to be a mum and I never thought I would be able to be one. But it is great and I love it. She’s a good girl.’

Richard got down on one knee and proposed at her 21st birthday party, catching her slightly off-guard.

The couple are to finally marry on July 18, with more than 100 friends and relatives invited to celebrate on the big day.

‘In previous relationships my partners have never really understood me or what happened to me,’ explained Terri. ‘Obviously I’ve only got the one leg now, but Richard took it really well and he understands me.

‘But no one thought we would get this far as a couple.’

She has been targeted by ‘trolls’ on social media in recent years, but the inspirational young woman is keeping her head held high.

Terri commented: ‘Sometimes it has been difficult to build relationships with people, especially when I was younger. But I’m much more confident in myself now.’

Full time carer Richard said he loved everything about her and described her as a ‘fighter’.

‘I could never meet a nicer woman than Terri,’ he explained. ‘I can’t wait to marry her and I’m really excited about the big day. It has taken a lot of planning.’

Terri is continuing to undergo operations on her damaged skin, but said she had become more comfortable with how she looks. 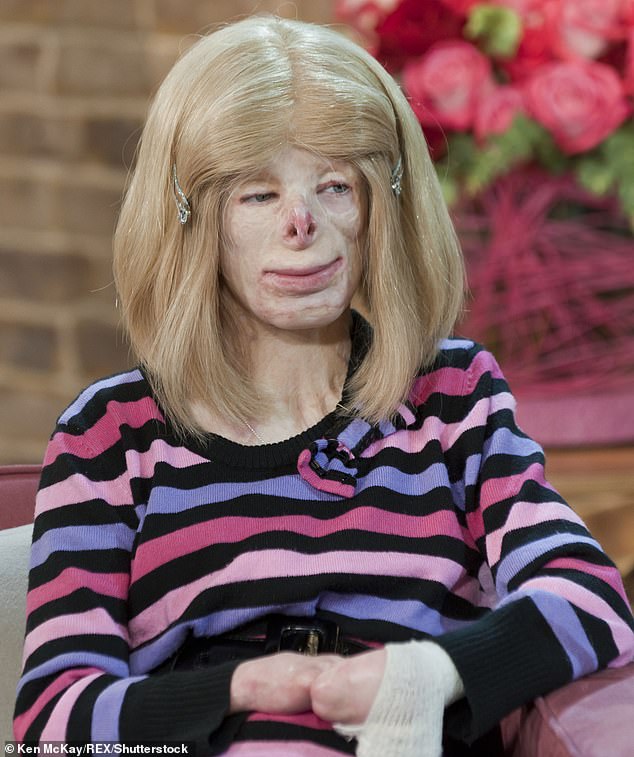 Terri’s burns were so severe that fire-fighters at the scene thought she was a charred doll lying in a cot. Pictured, in Februry 2011 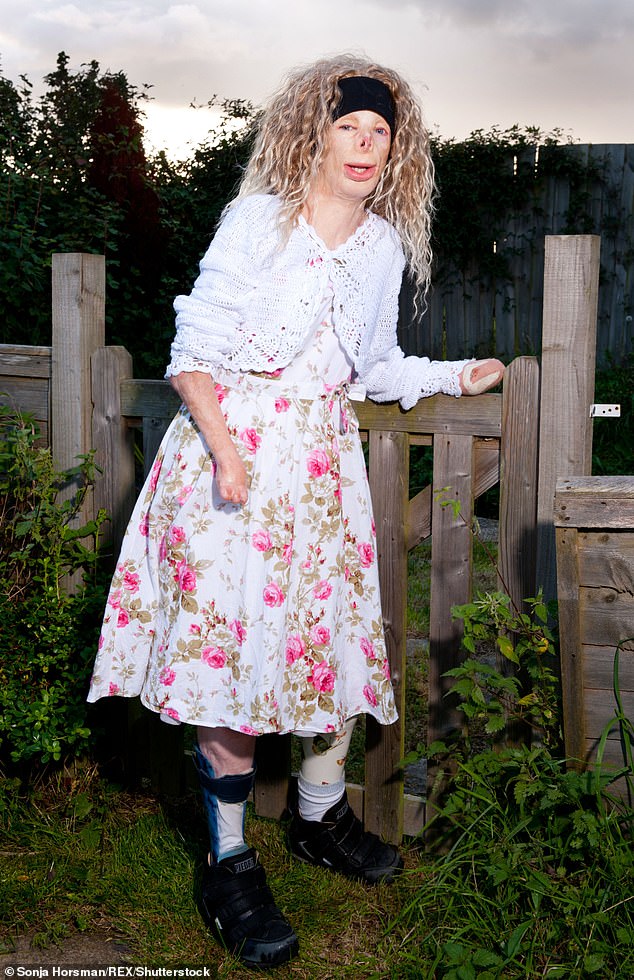 18 months old, Terri received 90% burns after her mother Julie Minter, accidentally started the fire by leaving a lit cigarette in her daughter’s bedroom at their Ipswich home. Pictured, aged 12

‘I wouldn’t take my leg off at first in front of Richard,’ she said. ‘But he made me feel really comfortable very quickly and now I take my wig and my leg off at night. He really does love me.’

Terri has been overwhelmed by the support she has received over the years from friends, family and people all over the world.

An appeal for her organised by the Ipswich Star newspaper had raised £500,000 for her care from well-wishers by 2012.

‘The trust fund has been amazing, I have lost count of how much money people have raised for me,’ said Terri.

‘I have also been really surprised about how many people continue to send me nice messages of support.

‘I even get messages now on Facebook still, with people from Canada or America, which is crazy. It means so much to me.’

Teri was presented with a Pride of Britain child of courage award by the Duchess of York in 2004.

Once married, she and Richard are hoping to find a bigger home in Halstead.

Terri is also hoping to return to college to continue her animal care course, and in the future she wants another dog, and will continue her work with the RSPCA.