‘This is a game changer’: Mum shows off the bizarre cleaning ‘hack’ that leaves her shower sparkling in SECONDS

A mum has shared the unusual cleaning trick she uses to ensure her shower screen is sparkling clean all year long.

The two-in-one trick that involves putting a dishwashing tablet into a ‘magic sponge’  and rubbing it over the shower door before rinsing it off.

The mum posted the genius idea to the Australian Facebook group, Mums Who Clean, and thanked the woman who originally shared the bizarre ‘hack’ online.

‘It worked brilliantly for the shower glass! I did only have the dissolvable tablets and [it] still works,’ she wrote. 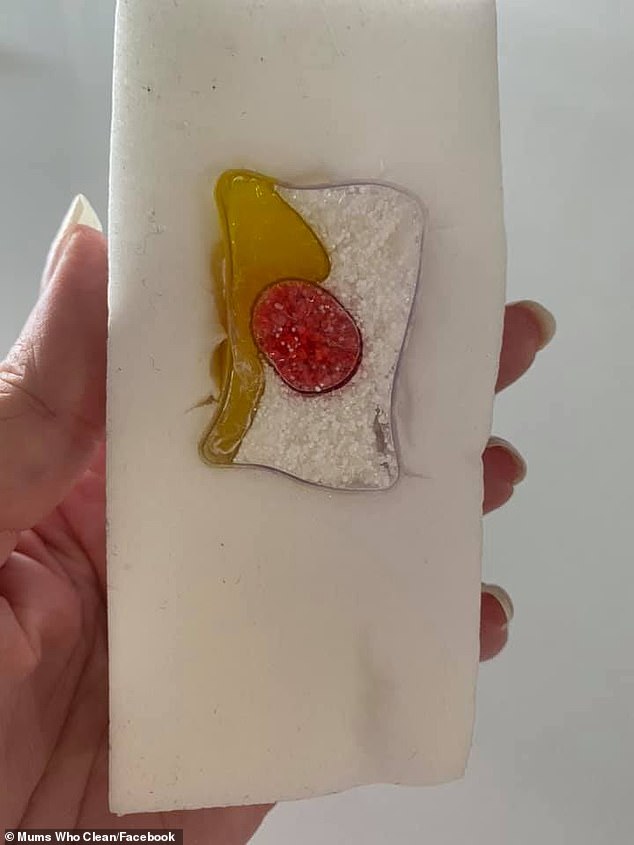 The modified sponge will clean your shower or bathroom surfaces and leave it looking spotless.

To combine the two products together, cut a small indent inside the magic sponge that’s the size of the dishwashing tablet, then place the tablet into the slot.

Prior to starting the cleaning transformation, be sure to use a small amount of water before applying to a surface.

Online the creative idea quickly caught the attention of other mums, with many wanting to try the cleaning hack for themselves.

‘Game changer – trying this on Monday,’ one woman said.

‘That would be good on the oven like that too,’ another added.

A third woman said she uses the Fairy Platinum spray rather than using a whole dishwashing tablet.

‘Can get a spray version of the tablets in the Fairy brand too,’ she said, adding: ‘Just [use the] spray and a cloth – I use on my glass, ovens and tough dishes.’

Other mums asked whether the combination scratches the glass, to which the woman responded saying it doesn’t.

‘I’ve used magic erasers on all my shower screens – brand new ones as well and never had a scratch or buff mark,’ another woman commented.