A devastated husband has revealed his heartache after his wife died following a hospital’s failure to investigate a tumour that had shown up on an X-ray two-and-a-half years earlier.

Colette Jervis, 48, from Stretford, Manchester, was diagnosed with thymoma, a rare malignant tumour of the thymus gland, in November 2012.

Following her diagnosis, Colette was told by a consultant that the thymoma had been present on an X-ray carried out at Trafford General Hospital two-and-a-half years prior, but had remained undiagnosed at that time.

Despite undergoing radiotherapy and surgery to remove the growth, the mother-of-one died in May 2018, after spending much of her final months in hospital.

Prior to her death, Colette had lawyers investigate the care she received under Manchester University Hospitals NHS Foundation Trust and her husband Mark received a letter of apology and a settlement was reached in May this year.

A heartbroken Mark, who shared teenage son Kieran with Colette, said: ‘Unfortunately, Colette’s went undiagnosed for some time and led to the worst outcome possible.’ 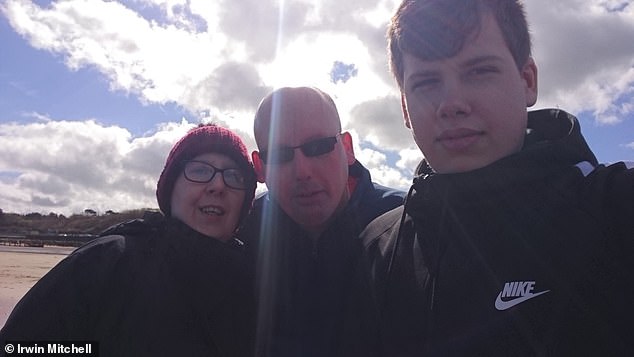 Colette Jervis (pictured left, with her family), 48, from Stretford, Manchester, was diagnosed with thymoma, a rare malignant tumour of the thymus gland, in November 2012

He admitted: ‘Losing Colette is the worst thing I have ever had to go through and I still miss her terribly every day.

‘Thymoma is a relatively rare and complicated disease, but if caught early can be treated effectively.

‘Once we were told the cancer was terminal, the specialists told us the average lifespan is between five and eight years, but all we got was 18 months which was heartbreaking.

‘Kieran was absolutely devastated to lose his mum. He misses her so much, and unfortunately he has more memories of her being ill than not, which is very upsetting. 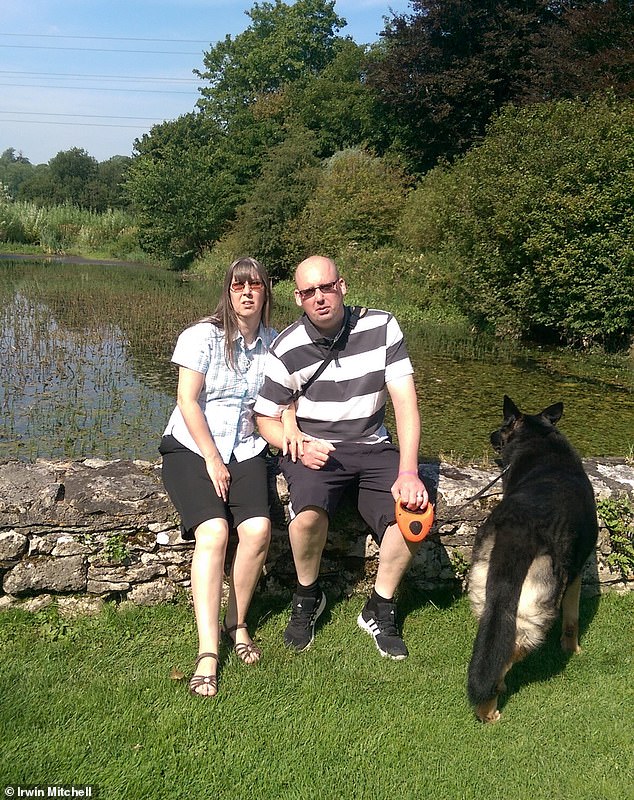 But despite undergoing radiotherapy and surgery to remove the growth, the mother-of-one (pictured with her husband) died in May 2018, after spending much of her final months in hospital

‘All I want to do is turn back the clock to when Colette was still with me, but I know that isn’t possible.

Thymoma is a disease in which cancer cells form in the thymus, which is located behind the sternum and between the lungs.

It is only active during puberty, and then starts to shrink and becomes replaced by fat.

The homrmone it produces, thymosin, stimulates the development of disease-fighting T cells.

Thyomas are generally slow-growing tumours found most often in people between the ages of 40 and 60.

The tumours vary in how they behave and it’s unclear what exactly causes them.

Some grow very slowly and can spread to the lungs or the covering of the lungs.

Symptoms of thymoma may include:

‘I hope that my story will raise awareness of how early diagnosis is important when it comes to thymoma, and also ensure that lessons are learned to prevent this happening to anyone else. I would not wish this pain on anyone.’

Colette initially sought medical advice with a persistent cough. By the time of her diagnosis her symptoms had progressed and she had developed shortness of breath, dizziness, chest pain and a hoarse voice.

She saw her GP in March 2010, complaining of a continuous cough and pain in her breast bone, and referred for a chest x-ray at Trafford General Hospital on 6 March.

It was reported as showing a ‘small bulge…of uncertain nature’ but she said she did not hear from the hospital or her GP afterwards, so ‘assumed no news was good news.’

Colette attended her GP again in May 2012, feeling generally unwell and suffering from another cough. She was prescribed antibiotics and underwent routine blood tests, which highlighted anaemia. Her GP advised her to take iron tablets.

On 3 June the same year, Colette attended Trafford General Hospital complaining of feeling dizzy and suffering from a tight chest and shortness of breath.

She was referred for a further chest x-ray at Trafford General Hospital in September. The report showed an ‘abnormal figuration’ which had been seen on the previous x-ray two-and-a-half years before, but was now ‘far more prominent.’

The mother was sent to the Rapid Access Chest Pain Clinic and underwent an echocardiographic examination on 16 October, which returned normal.

On 6 November, Colette saw her GP with chest pain. Trafford General Hospital requested an urgent CT scan, which was carried out on 13 November, and a referral was made to a consultant cardiothoracic surgeon. 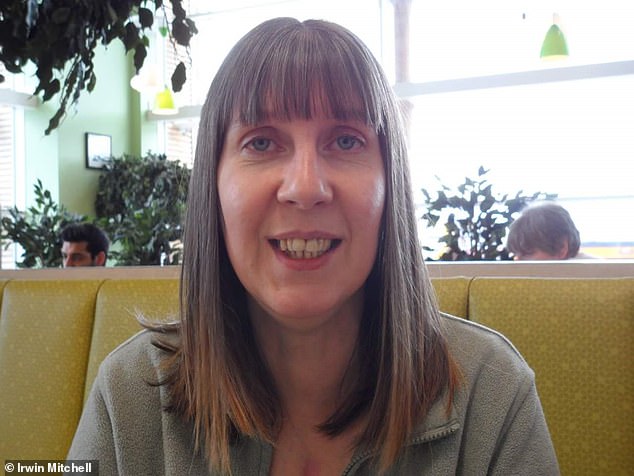 Following her diagnosis, Colette (pictured) was told by a consultant that the thymoma had been present on an X-ray carried out at Trafford General Hospital two-and-a-half years prior, but had remained undiagnosed at that time

Shortly after, Colette’s GP confirmed a diagnosis of a thymoma. Colette saw a consultant four days later, who advised her that the tumour had been present for two-and-a-half years.

On 20 February 2013, Colette underwent surgery at another hospital to remove her thymus gland. She began radiotherapy in May 2013.

But just a short time after, Colette was complaining of ongoing chest pain and breathlessness and was referred to the respiratory team.

Within a few months, it was confirmed that her tumour had returned and spread to other parts of her body.

Colette’s symptoms got progressively worse, with repeated episodes of respiratory failure. She died on 26 May 2018, having spent much of her final months in hospital.

Prior to her death, Colette instructed specialist medical negligence lawyers at Irwin Mitchell to investigate the care she received under Manchester University Hospitals NHS Foundation Trust, which runs Trafford General Hospital, and whether more should have been done to diagnose the cancer sooner. 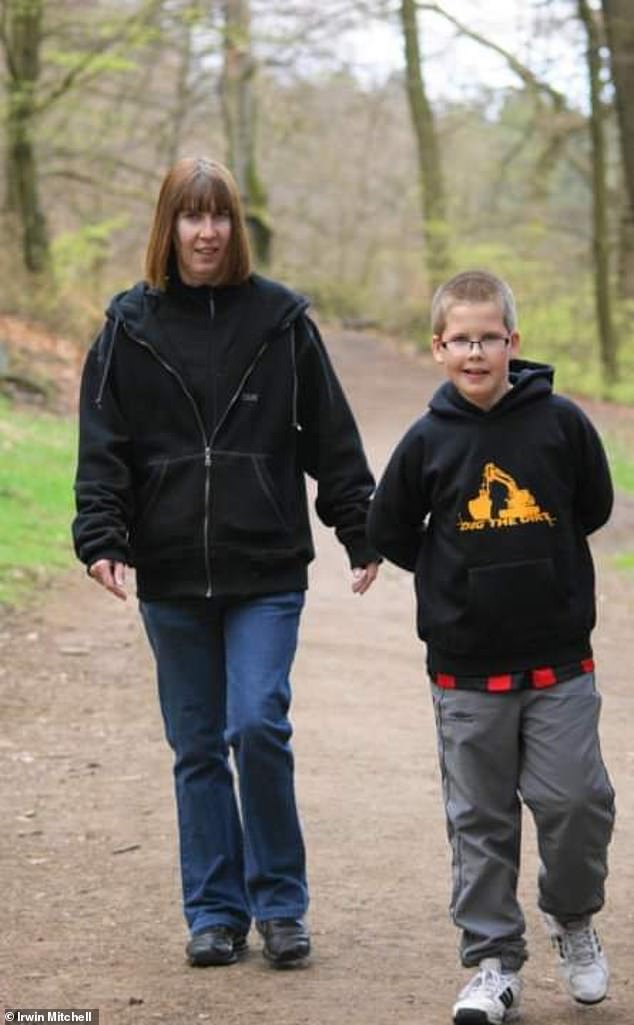 A heartbroken Mark, who shared teenage son Kieran (pictured as a youngster with his mother) with Colette, said: ‘Unfortunately, Colette’s went undiagnosed for some time and led to the worst outcome possible’

After losing his wife, Colette’s husband Mark decided to continue to investigate her care with the legal team.

The Trust further admitted that had Colette’s thymoma been diagnosed earlier, surgery would have been performed within four weeks and, on the balance of probabilities, she would have avoided the need for postoperative radiotherapy.

Mark, who had been married to Colette for 19 years, received a letter of apology from the Trust, and a settlement was reached in May this year.

Kevin Saul, the specialist medical negligence lawyer at Irwin Mitchell representing Mark, said: ‘The past few years have been incredibly difficult for Mark, first losing Colette in such a tragic way, but then also finding out that it could likely have been prevented if she had been diagnosed sooner.

‘Through our work we come across many families left devastated after going through similar experiences of delays in cancer diagnosis. We all know early diagnosis counts in the treatment of cancer.

‘While nothing can bring Colette back, it is some relief for him that we now understand more about what happened to her and Mark hopes that lessons are learned so no-one else has to go through what he has.’