The Duke and Duchess of Cambridge were left tickled pink by stories of Churchill’s ‘secret’ birthday message to his son when they chatted to Second World War veterans about their VE Day memories.

Champagne was flowing when Prince William, 37, and Kate Middleton, 38, made a video call on Wednesday to residents of an East Sussex care home to listen to them reminisce about the day the war ended in Europe on May 8 1945.

William praised the efforts of the wartime generation, and told them: ‘Because we can’t be together, everyone’s still thinking of you all today, and are very proud of everything you’ve all achieved.’

She said: ‘The school has set all the children a challenge and they’re currently trying to learn the lyrics to the song We’ll Meet Again… so it’s been really lovely having that playing every day.’

The Duke and Duchess of Cambridge (right) listed to the stories of veterans Charles Ward, 101, and Jean Hull (pictured left) from Mais House, a Royal British Legion Care Home in Bexhill-on-Sea, East Sussex

The residents had started their VE Day celebrations early, and when the royal couple asked what they would do when the Covid-19 outbreak was over, the sprightly group said they would hold VC Day – ‘Victory over Coronavirus’.

With a glass of bubbly nearby, Charles Ward, the oldest resident at Mais House, a Royal British Legion care home in Bexhill-on-Sea, joked about how he served tots of rum to fellow servicemen on VE Day.

‘We were in Greece at the time, and I had to go round early in the morning with rum for all the men,’ he said with a laugh.

William replied: ‘I bet you were the hero of the time there Charles, delivering rum out to everybody.’

Mr Ward, aged 101, had a varied military career during the war and, after first being called up into the London Irish Rifles, he later served in North Africa before joining the Special Operations Executive to encrypt, or cipher, messages from British agents parachuted into France and Italy.

The veteran, from South Kirkby in Yorkshire, told the Cambridges about working on ‘secret’ messages from wartime leader Sir Winston Churchill. 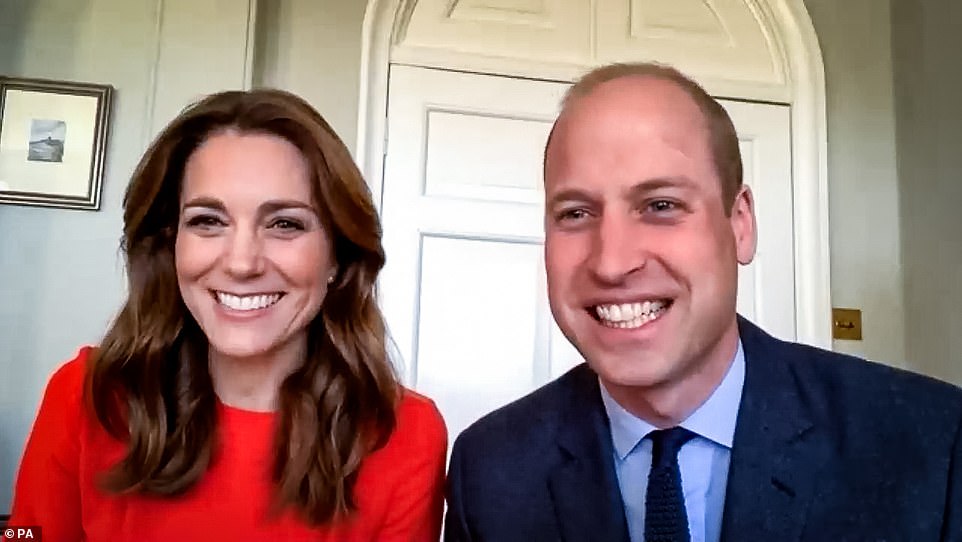 Prince William praised the efforts of the wartime generation and reassured them that while we can’t be together due to the coronavirus pandemic, everyone is still thinking of them today. Pictured, with Kate Middleton

The duke said Valerie Glassborow, Kate’s paternal grandmother, was a civilian member of staff at the wartime code-breaking centre Bletchley Park, where her twin sister Mary was also employed.

The duchess, who was just one of a number of royals who have chatted to veterans this week, said: ‘It’s so sad that she’s not here today, as I would love to speak to her more about it.’

Mr Ward later described the correspondence he received from the wartime leader, saying: ‘The message came from Churchill, I had to decipher it, re-encipher it and send it to his son in Yugoslavia to say, ‘Happy Birthday’.

‘And then there was another one from the son to Churchill himself to say congratulations on your speech in Parliament.

‘When I told William and Kate that story, they giggled.’

The residents began VE Day with a religious service performed by a minister on a balcony, to maintain lockdown rules, before they were entertained by a comedian and historian – in character as Churchill – and enjoyed a lunch washed down with more champagne. 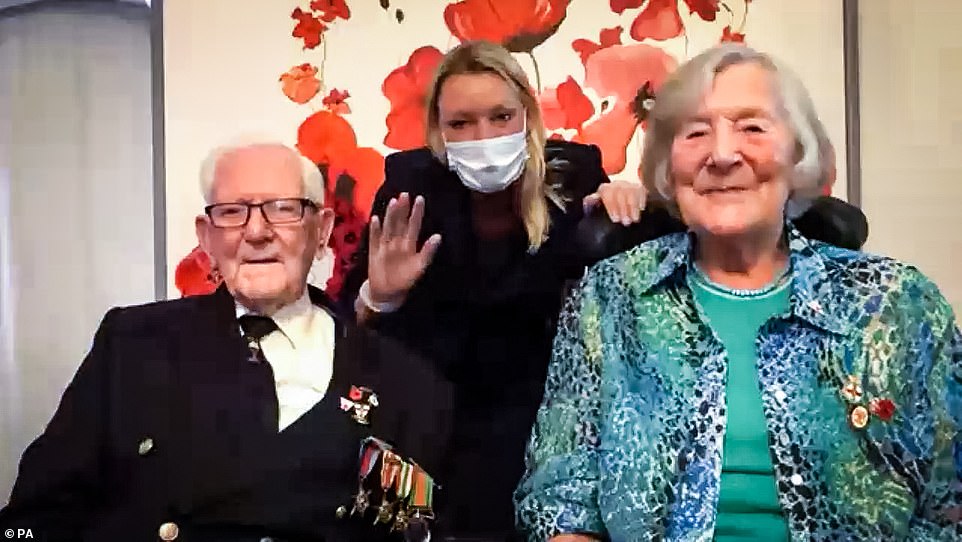 Charles Ward and Jean Hull, alongside Susan Barnes, from Mais House, a Royal British Legion Care Home in Bexhill-on-Sea, East Sussex, during a video call with the Duke and Duchess of Cambridge

Resident James Pyett, 95, also chatted to the royals and they quizzed him about his experiences of the Blitz.

The family of the veteran, who served as a driver with the Royal Corps of Signals during the war, were bombed out of their Limehouse home in the East End of London, but when they sought refuge in Bournemouth they found themselves targeted again by the Luftwaffe.

The 95-year-old said: ‘I was blown up and put in hospital and my father said, ‘Right, if we’re going to be bombed here, we’re going back to London’.’

Mr Pyett said his family were given a home in Clapham, south London, adding: ‘We moved in on a Saturday afternoon and we were bombed out on the same Saturday night.’

He and his father were left covered in dirt after the roof fell in and they went to find his mother, who had sheltered from the attack in an air raid shelter.

William and Kate laughed when the 95-year-old said: ‘My mother took one look at my father all covered in soot and dust and she said – and she was a real Cockney woman – ‘I knew we bloody well should have stayed in Bournemouth’.’

The 95-year-old was in the Netherlands on VE Day, returning to his unit’s base in Ghent, Belgium, and ‘when we got back, we had a whale of a time’, he said with a laugh.