According to a release, the book is a reminder to readers of the “endless promise and continuous obligations of all Americans — to themselves, to one another, and to their nation — to stand with unity, resolve, and faith.” 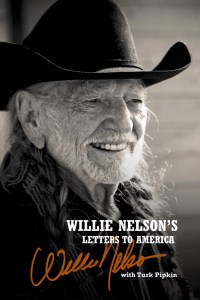 Along with ruminations on our country, Letters to America includes Nelson’s thoughts on family, leadership, and, naturally, music. His lyrics are woven throughout the book, which includes letters titled “Dear America” and “Dear Road.” Nelson collaborated on the book with Turk Pipkin, a contributing editor at Texas Monthly, who also teamed up with the country songwriter on 2006’s The Tao of Willie.

Willie Nelson’s Letters to America is the follow-up to September 2020’s Me and Sister Bobbie: True Tales of the Family Band, a collaboration with Nelson’s sibling Bobbie Nelson, a 47-year member of his touring group. The Country Music Hall of Fame member released his memoir It’s a Long Story: My Life in 2015.

On Friday, Nelson released his latest music album. That’s Life is an 11-song tribute to Frank Sinatra and follows another homage by Nelson to the crooner, 2018’s My Way.