Home » Who killed Erin? Lining up the suspects ahead of Mare of Easttown finale

There are many reasons to love Mare of Easttown: Kate Winslet’s astonishingly lived-in performance; the space given for secondary characters to breathe in their own right; the gritty realism of its portrait of a small town in economic and moral crisis (even if the actual Easttown, Pennsylvania is in truth one of America’s more desirable places to live).

But there’s another reason it has so captured the imagination of all who have seen it. It’s a cracking whodunnit. 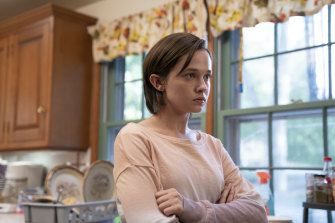 Erin McMenamin (Cailee Spaeny), whose murder is at the centre of Mare of Easttown.Credit:Foxtel/HBO

Billy Ross
Erin, his first cousin once removed, briefly lived with him; he was apparently having sex with her; and he’s confessed to her murder: so that’s a lay-down misere, right? Sure, unless you’ve ever watched a short-run HBO drama before. If there’s one thing we’ve learned about a confession delivered in the second-last episode it’s that it’s unlikely to hold to the end of the last.
Likelihood of guilt: Middling 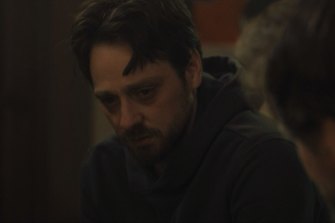 Billy Ross (Robbie Tann) has confessed to Erin’s murder. But did he really do it?Credit:Foxtel

John Ross
He gets bonus points for being married to Lori (the always-great Julianne Nicholson), but he loses them for cheating on her – twice. He’s down a bunch more for dragging his poor kid Ryan into it too, making the poor kid an inadvertent witness to his philandering. Now he’s packed a pistol in the tackle box for his fishing getaway with Billy and we don’t think that’s for putting trout out of their misery.
Likelihood of guilt: High 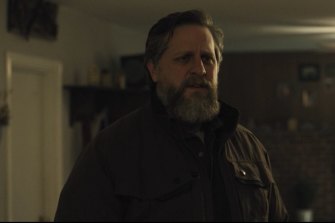 John Ross (Joe Tippett) could be hiding a lot more than a pistol. Credit:Foxtel

Lori Ross
Let’s imagine John’s affair was with Erin, and that Lori has cottoned onto the fact. Perhaps in a fit of rage, she has killed the girl rather than deal with the truth of her husband’s cheating incestuous ways. It’s unlikely, but if anyone could sell it it’s Julianne Nicholson.
Likelihood of guilt: Low 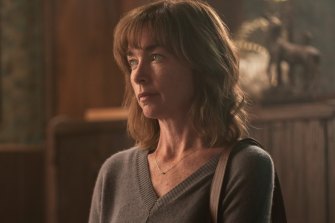 Lori Ross (Julianne Nicholson) may be a woman wronged, but is she angry enough to kill?Credit:Foxtel

Deacon Mark Burton (James McArdle)
This man of God was the last person to speak to Erin, he admits he gave her a lift to the park where she was killed, he disposed of her bicycle. Oh, and he was moved from his previous parish over an allegation of inappropriate contact with a minor. I smell red herring though. My prediction: he and Billy were lovers, and Erin – desperate to raise money to fund her son’s ear operation – threatened to spill the beans.
Likelihood of guilt: Medium-high 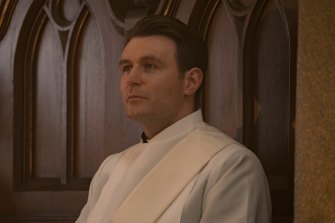 Father Dan Hastings (Neal Huff)
Did he think he’d discovered something inappropriate going on between Mark and Erin, and try to cover it up in order to protect the church from yet more scandal? Maybe, but this isn’t Boston.
Likelihood of guilt: Low 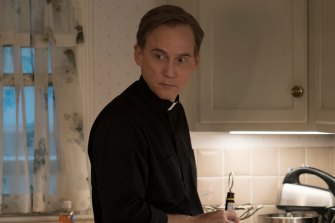 Father Dan Hastings (Neal Huff) is Mare’s cousin. But family ties are no guarantee of innocence in this drama.

Brianna Delrasso (Mackenzie Lansing)
The mean girlfriend of Erin’s ex, Dylan Hinchey (Jack Mulhern), Brianna makes an instant impression, telling Erin “you’re going to get it, when you least expect it”. A couple of hours later, she punches Erin in the face. The next morning, Erin turns up dead. Her alibi is Dylan, and she his – only it turns out he isn’t.
Likelihood of guilt: Low 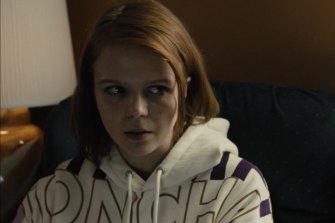 She threatened to hurt Erin, but did Brianna (Mackenzie Lansing) go so far as to kill her?

Dylan Hinchey
Ex-boyfriend and presumptive father (later disproved) of her child, this emo thug has destroyed evidence, given a false alibi, and pistol-whipped best friend Jess (Ruby Cruz) in order to convince her to keep quiet about helping him steal Erin’s journals, which presumably contained some sort of incriminating evidence. It doesn’t look good.
Likelihood of guilt: High 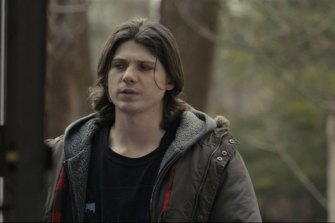 His alibi was a lie, he has destroyed evidence and he has threatened Erin’s best friend: does that all point to Dylan (Jack Mulhern) being the killer?

Kenny McMenamin (Patrick Murney)
Erin’s father has a drinking problem, anger-management issues, and a pistol – and he’s not afraid to use it, as Dylan found out. Might he have turned it on his own girl? Might he be the father of her child? Might we be about to trip over from gripping to utterly sordid in the finale?
Likelihood of guilt: Middling 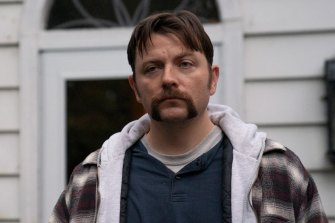 He’s a mean drunk. But is Erin’s father Kenny (Patrick Murney) capable of killing his own daughter?

Frank Sheehan (David Denman)
Mare’s ex and the father of her kids seems a thoroughly decent chap. But was the help this teacher offered to his student Erin entirely innocent? He may not be the father of her child but that doesn’t necessarily rule him out as a suspect in her murder.
Likelihood of guilt: Low 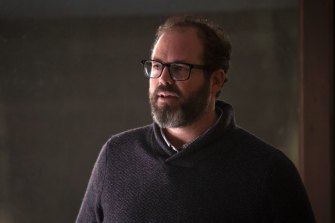 How far did Frank (David Denman) go in reaching out to his former student?

Richard Ryan (Guy Pearce)
The blow-in writer has no trouble attracting women, but he’s single. Could he possibly be the mysterious “Brendan” Erin had arranged to meet, via the escort agency app, on the night she died? It would be a dirty move in terms of storytelling, but it’s always the ones you least expect, isn’t it?
Likelihood of guilt: Low (unless the writers pull an absolute swifty) 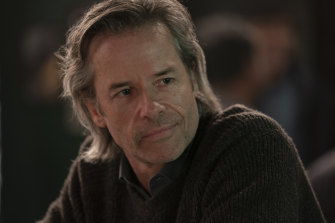 My prediction: Billy and Deacon Mark were lovers but not directly involved in Erin’s death. Dylan is involved in some sort of unrelated scam, probably involving oxycontin. Ryan’s second novel will never get written. John was having the affair with Erin, is the father of her child, and murdered her when she threatened to go public.

Ladies and gentlemen of the viewing jury, we await your verdict.