Home » Lifestyle » When does the furlough scheme end in 2021 and who can claim it?

THE furlough scheme supporting people's wages during the coronavirus crisis will continue until September.

The furlough scheme pays workers 80 per cent of wages for hours not worked, up to £2,500 a month, supporting many millions of workers during the pandemic.

Here, we explain all you need to know about the furlough scheme.

When does the furlough scheme end?

The Chancellor announced in the Budget on March 3, 2021, that the furlough scheme will be extended until September this year.

It's hoped the Government's wage support will help firms get back on their feet after lockdown eases.

However the scheme will change and from July employers will be asked to start chipping in.

Mr Sunak said businesses will have to contribute 10 per cent of the cost, increasing to 20 per cent in August and September as the economy reopens.

The Coronavirus Job Retention Scheme has protected more than 11million jobs since its creation in March 2020, with Mr Sunak promising further help in the "challenging months ahead – and beyond". 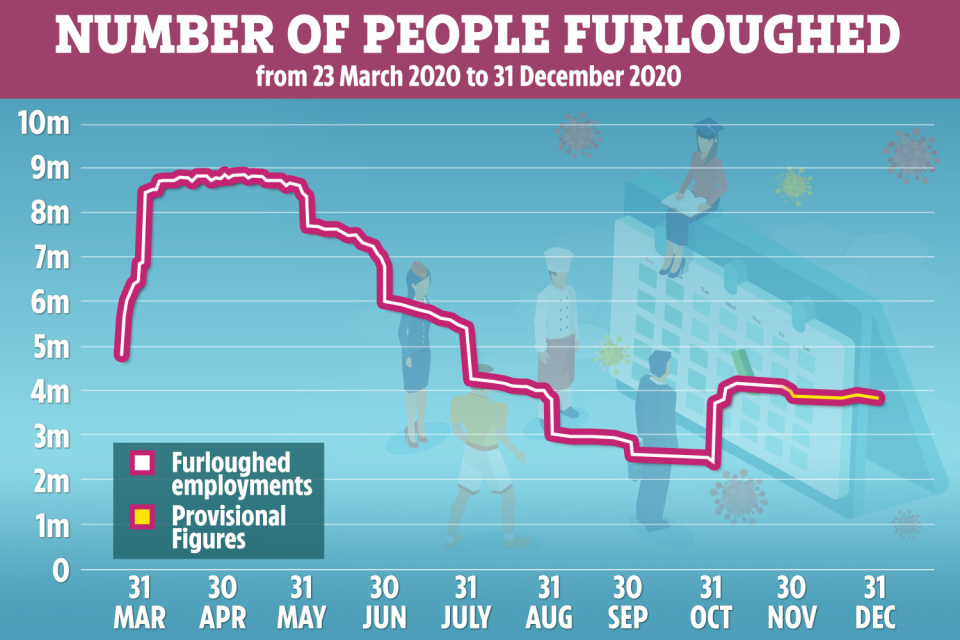 Mr Sunak said it was “only right we continue to help businesses and individuals through the challenging months ahead”.

He added: “Our Covid support schemes have been a lifeline to millions, protecting jobs and incomes across the UK.”

The Prime Minister hinted that furlough would be extended when setting out his roadmap out of lockdown.

The furlough scheme has been extended a number of times already.

The Chancellor first announced the support on March 20, 2020, at the height of the pandemic, and said it would only last until May 31, 2020.

It was then extended to October 2020, and when this deadline approached, was extended again until December before being extended into spring 2021.

In December 2020, the Chancellor said: "Our package of support for businesses and workers continues to be one of the most generous and effective in the world.

"We know the premium businesses place on certainty, so it is right that we enable them to plan ahead regardless of the path the virus takes.

"We’re providing certainty and clarity by extending this support, as well as implementing our Plan for Jobs."

How has the furlough scheme changed and will it be extended again?

Under current furlough rules, employees get up to 80% of wages paid for hours not worked, up to a maximum of £2,500.

From July the amount employers contribute will be 10%, rising to 20% in August and September.

At the moment, employers are still able to choose to top up employee wages above the scheme grant at their own expense – but they don't have to.

Workers also get their usual full salary for any hours they do work.

For hours not worked, employers will have to cover National Insurance and pension contributions.

Further details about whether this will still be the case going forward until September are expected to be announced by the Government in due course.

It also isn't clear if the rules regarding who can claim furlough will change.

At the moment, bosses can only claim for furloughed employees that were employed and on payroll on 30 October 2020.

Workers can also be on any type of contract to be furloughed as part of current rules.

The government was initially supposed to review furlough in January, but Mr Sunak brought his decision forward to give businesses certainty going into New Year.

It came ahead of the third national lockdown in England, which started on January 4.

The extension to September is the latest continuation of the scheme.

Who is eligible for the furlough extension?

The Government said in December the eligibility criteria for the furlough scheme extension until the end of April will remain the same.

The scheme remains open to any UK organisation with employees, including businesses, charities, recruitment agencies and public authorities, providing they have a UK bank accounts and UK PAYE schemes.

For any furlough claims up until April 30, you need to have been on your employer's PAYE payroll on or before October 30, 2020.

Employees being furloughed from May 1 until the end of September must have been on a PAYE payroll on March 2, 2021.

Workers can be on any type of contract, meaning you could still be furloughed if you are part-time or a contract worker.

And like last time, it is down to the organisation to arrange the help, rather than the employees.

The previous rules meant businesses are allowed to bring back furloughed employees on a part-time basis, although the government hasn't confirmed if this is the case for the April 2021 deadline.

Can I be made redundant if I’m on furlough?

EVEN though furlough is designed to keep workers employed, unfortunately it doesn’t protect you from being made redundant.

But it doesn't affect your redundancy pay rights if you are let go from your job amid the coronavirus crisis.

Your employer should still carry out a fair redundancy process.

You will be entitled to be consulted on the redundancy lay-off first and to receive a statutory redundancy payment, as long as you've been working somewhere for at least two years.

How much you're entitled to depends on your age and length of service, although this is capped at 20 years. You'll get:

Sadly, you won't be entitled to a payout if you've been working for your employer for fewer than two years.

There should be a period of collective consultation as well as time for individual ones if your employer wants to make 20 or more employees redundant within 90 days or each other.

You are also entitled to appeal the decision by claiming unfair dismissal within three months of being let go.

If you're made redundant after your company has gone into administration you can claim redundancy pay via Gov.uk.

Large companies (with more than 250 employees) have to meet a financial impact test, as part of current rules.

It means the scheme is only available to those whose turnover has stayed the same or is lower than before Covid-19.

There is no financial impact test for SMEs or charities.

The details of the extension after April and until September – including who is eligible – has not yet been announced.

If you're self-employed, details of the fourth instalment of the support scheme grants were revealed in the Budget.

What is happening to the Job Support Scheme?

It's not clear yet what will happen with JSS, announced in October, and if it will be available after the furlough scheme ends.

The scheme aimed to continue to support businesses and their employees facing coronavirus-related woes, and was expected to come into effect in December.

The Chancellor hoped the JSS extension would reduce the millions of job losses expected when furlough ends.

But rising cases of coronavirus, another lockdown and a troubling economic outlook led Mr Sunak to continue the furlough scheme.

Under the JSS, employees could work one day a week and earn up to 73% of their wages.

It was designed to help employees working for businesses that have shut down in areas put under previous Tier 2 and Tier 3 restrictions.

Employees on the scheme would have needed to have worked a minimum of 33% of their hours to be eligible, and businesses must contribute a third of wages.

More than 160,000 Brits who have lost their job due to the Covid crisis will get a new bumper package of support.

Here's how to get furloughed if you're struggling juggling childcare and working from home.

And we explain your redundancy rights if you've been furloughed.