A group for groups? WhatsApp launches Communities feature that lets you place several group chats TOGETHER and message them all at the same time

Whether it’s in your neighbourhood or at your child’s school, there are often situations when it would be useful to message several groups at once.

Now, WhatsApp has launched a new tool called Communities, which essentially lets you do just that.

Users will be able to place several group chats together under one topic and share updates with them all. 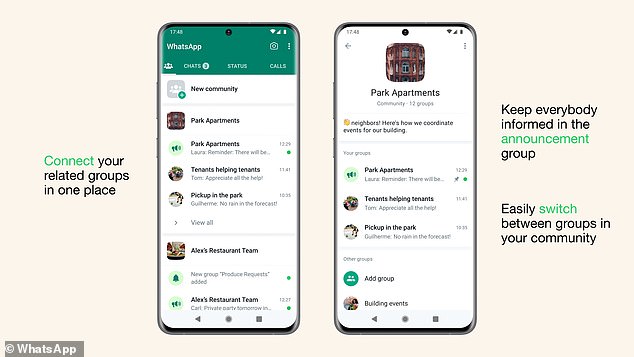 Reactions – Emoji reactions are coming to WhatsApp so people can quickly share their opinion without flooding chats with new messages.

Admin Delete – Group admins will be able to remove errant or problematic messages from everyone’s chats.

File Sharing – WhatsApp is increasing file sharing to support files up to 2 gigabytes so people can easily collaborate on projects.

Larger Voice Calls – WhatsApp will introduce one-tap voice calling for up to 32 people with all new design for those times when talking live is better than chatting.

Communities was first announced back in April, but is now being rolled out globally.

A new Communities tab will appear at the top of chats on Android and at the bottom for those using the iOS version.

After tapping on this tab, you can start a new ‘Community’ from scratch, or add exisiting groups.

In a blog post announcing the new tool, WhatsApp explained: ‘Once you’re in a community, you can easily switch between available groups to get the information you need, when you need it, and admins can send important updates to everyone in the Community.’

WhatsApp hopes the tool will offer users a way to communicate with multiple groups ‘with a level of privacy and security not found anywhere else.’

‘The alternatives available today require trusting apps or software companies with a copy of their messages – and we think they deserve the higher level of security provided by end-to-end encryption,’ it added.

Rather than spamming everyone in a group chat, users will now be able to create in-chat polls, as a ‘fun and effective way to decisions in a group.’

Video calls will be expanded to up to 32 people, while groups can now include up to 1,024 users.

Group admins will have the power to remove ‘errant or problematic messages’ from everyone’s chats.

And emoji reactions are coming to WhatsApp so people can quickly share their opinion without flooding chats with new messages.

‘We’ve been working with over 50 organizations in 15 countries to build Communities to meet their needs,’ WhatsApp added.

‘We’re excited that the feedback we’ve heard so far is these new tools are helping groups like these better organize and achieve their goals.

‘There’s a lot more we plan to build and we’ll keep adding features over the coming months.

‘For now, we’re excited to get this into more people’s hands and hear your feedback too.’

If you’re considering deleting WhatsApp, you’ll be happy to hear that there are several alternative apps to choose from:

With more than 400 million users, Telegram is one of the most popular WhatsApp alternatives.

While it looks very similar to WhatsApp, what sets it apart is the fact that it gives the option to set messages to self-destruct after a given period of time, leaving no trace.

However, as a WhatsApp spokesperson pointed out, Telegram ‘does not offer end-to-end encryption by default so it’s not necessarily more secure than WhatsApp’.

Signal is one of the most secure messaging apps, thanks to the fact that it is open-source.

This means that the code for the app is publicly available to view, making it near-impossible for the app’s creators to sneak in any backdoors that could allow governments or hackers to spy on your messages.

If you use an iPhone, you may consider simply switching to iMessage, Apple’s own messaging app.

The app has a number of impressive features included no character limits, the ability to send pictures and videos, and of course Apple’s animated emoji feature, Animoji.

Unfortunately, iMessage is only available for iPhone users, so you’ll struggle to interact with anyone using an Android.

The app replaces your standard SMS app, and integrates with all of Google’s apps and services, making it easy to share images or use Google Assistant.

If you were put off using WhatsApp due to its sharing of data with Facebook, Facebook Messenger may not be the best option for you.

However, the app offers a number of helpful features, including games, secret conversations and video calls.