Once, there was the tour book. Typically written by a journalist, it was part cricket story, part travelogue. Test matches then were more widely spaced, and tours longer and further apart, and the gaps were filled with rich adventure, not to mention plentiful whimsy.

The player’s book killed off the journalist’s book, then pretty much killed itself off. With honourable exceptions, the player’s book was so shallow that it should have come with a warning against diving into it. Blogs took over, and now docos.

Consciously or not, Geoff Lemon is reviving the tour book. First came Steve Smith’s Men, covering the Cape Town catastrophe, which deservedly won awards. Now there’s The Comeback Summer, on the twin wonders of World Cup and Ashes in England last year. Lemon is a published poet and proper writer, beside which the rest of us are merely trying to establish complete sentences. 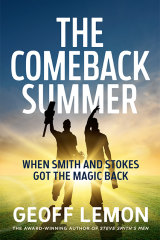 The Comeback Summer by Geoff Lemon.

He’s also a maverick, so reports variously from the camera gantry at Lord’s, the western terrace at Headingley and a riotous share house in inner northern Melbourne where he and pals recreate the fabled cable broadcasts of the 1930s and apply it to a Pakistan-Australia series. So was launched an entrepreneurial career in cricket media.

Then there are his philosophical and literary platforms, broader and more plentiful still. He writes beautifully about cricket, even better around cricket. There’s some nerd detail, in fact enough to qualify for full nerdhood, but spun onto a much higher plane. The tour book is back, the rebirth of anthology cannot be far away.

This has been a year of necessarily limited and dull horizons, except one, the imagination. However you choose to stretch it, there has been time and scope. For book readers, it has been binge time. Publishers certainly think so: they’ve been pushing them out by the dozens.

Since I started writing this column, three more have arrived; that’s the fecund moment we’re living in. My desk is piled high on both sides – I’m not sure whether that’s the desktop groaning or my partner – but here we’ll content ourselves with the sporting oeuvre. This is not a selection, rather a random tranche that has selected me. 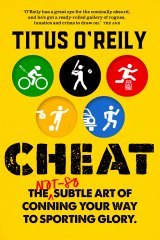 Cheat is a deft work. Titus O’Reily applies to a vast and serious subject his trademark touch, which might be called affectionately satirical. You open Cheat to be amused and come away boggle-minded by the increasingly outrageous stories. It makes for an eminently readable tale.

Crimmo is a hefty paperback, a work of doting research by the ever-productive Dan Eddy. Peter Crimmins was the brilliant Hawthorn captain who died of cancer way too young at 28, Eddy’s book ought to endear Crimmo to a new generation. 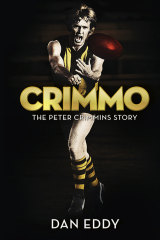 The book is worth it alone for the poignant chapter on how captain Crimmins, having left behind a bout of cancer treatment, was overlooked for the 1975 grand final and never played again. Somehow, he had the presence of mind to talk his torment into a tape recorder. Kids, google it.

In On The Take, academics Tony Joel and Matthew Turner retell via meticulous digging the tale of Carlton’s Alec (aka Alex) “Bongo” Lang, a VFL star of the first decade of the 20th century, who on eve of the 1910 grand final was found guilty of taking a bribe to play poorly and suspended for five years.

There’s much to it than that, of course, but what strikes about this story is not what has changed in more than 100 intervening years, but what has not. The nexus between pay grievances and gambling, and the path from there to match-fixing is as clearly defined now as then. It is the triad from which we all still avert our gaze. Then there’s this: “The league tinkered with the game to make football a more appealing spectacle for fans.” The year? 1897, year dot.

Long before Titus O’Reily, and liable still to outlast him, there were the inimitable Coodabeens. Their feat in spending four decades gently taking the piss out of footy while remaining so obviously devoted to it merits more recognition than it gets.

Some of those who they first had rolling in the aisles are now rolling in their graves, re-splitting their sides. They, like their schtick, never grow up. Their contribution, Coodabeen Champions: 40th Anniversary, is a kind of Coles Funny Picture Book of footy. Kids, look that one up, too. 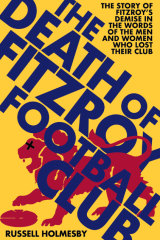 The Death of the Fitzroy Football Club by Russell Holmesby.

The Death of Fitzroy is spun out of a series of interviews done by Russell Holmesby, Mal Brown and David Rhys-Jones for Inside Football over 17 years, and so is a piecemeal piecing together of the story of the fall and fall of the Lions of Fitzroy. Ultimately, it is a sad book, reminding us that we lost not just a footy club, but an identity, a chunk of Melbourne. In Brisbane, they may be the Lions, but they can never be the Fitzroy Lions again.

The Frank Tarrant Story is more properly a saga. Melburnian Tarrant must be the most accomplished cricketer never to play Test cricket, leaving his mark in Australia, England and finally in India. Mike Coward’s depiction of him was 30 years in the making. In the Coward style, it is homage without the fromage. And to think that Roger Woolley played a Test and Frank Tarrant didn’t.

Cricket books come in all shapes and forms. Archie Jackson – Cricket’s Tragic Genius is a compact reissue with a few extra trimmings of David Frith’s loving 1974 bio of Jackson, a batting prodigy whose life was cut short by TB at just 23. I’d almost forgotten the touching foreword written by Harold Larwood; the pair were improbable mates.

Tarrant and Jackson are both hardbacks. Proper cricket books have spines. Clearing Boundaries, a visually arresting history of women’s cricket in Australia, is called a coffee table book, but with a set of legs, it could be a coffee table, such is its heft. But that’s not to downplay Thwack, former Test off-spinner Ashley Mallett’s latest bendable offering, a kind of licorice all-sorts of cricket (back to your browsers, kids). Like every good off-spinner, Mallett depends on his variations.

But the most engrossing book I read in solitary confinement doesn’t really exist in book form in the orthodox sense and will be published in an edition so limited the print run won’t reach 100 copies.

It’s called From Pariahs to Premiers. In 1976-77, University of NSW in only its fourth year in the rugged Sydney grade cricket competition, shocked by winning it. At most three names will be recognisable to the average reader. The youngest was Geoff Lawson, in his first year up from the bush. The eldest, the captain and inspiration, was John Rogers, father of former Test opener Chris. The all-round star was Mark Ray, later captain of Tasmania, who also worked for this publication as a photographer and cricket writer.

But every character in it will resonate by type, temperament – and nickname – with anyone who has played club cricket at any level. This is the real Grade Cricketer, superior by far to the tedious fiction. The cricket is bloody real, too: Andy Roberts one week, Len Pascoe at his peak the next. Duck!

It began as an exchange of emails. Collated by Rogers and Ray, it is still all emails, interleaved by sepia-toned photos, also intricate scoring charts kept by the scorer.

This format has two effects. One is of a barside conversation between old friends – many eminent in their fields – who are still full of understandable wonder at what they achieved all those years ago. But it also means no-one talks over the top, everyone gets a hearing and gaps in the memory of one are soon filled by the imperishable reminiscences of others.

It’s a ripping cricket yarn, but Ray and Rogers have no intention of publishing to a wider audience. I lobbied, but I think in vain. And maybe they’re right: that a slick production and commercial-scale circulation would take away the magic, that it would become a story stolen. In that case, best I stop here.