Home » Lifestyle » What it was like to travel on Flybe, the budget airline used by the royals that just declared bankruptcy

Coinciding with the global spread of the coronavirus, British budget airline Flybe collapsed on Thursday morning, confirming in a statement that it had entered administration, all flights had been grounded, and the business has ceased trading with immediate effect. It also advised passengers to "not travel to the airport" unless they had "arranged an alternative flight with another airline."

Flybe employed around 2,000 people, and was Britain's largest regional airline, operating 189 routes across 12 countries in the UK and Europe.

It was known for its stringent bag policy, short flights (it had an average flight time of 55 minutes), and purple lights.

The royals also appeared to be fans of the airline — in August 2019, Kate Middleton, her husband Prince William, and their children flew on Flybe from Norwich in England to the Scottish city of Aberdeen for around $89 each.

A spokesperson for the UK Department of Transport said: "Flybe's financial difficulties were longstanding and well documented and pre-date the outbreak of COVID-19. We are well prepared for a potential outbreak and this week we have set out an action plan with details of our response."

Using information from bloggers and websites including Flight-Report, TripAdvisor, Trustpilot, and Skytrax, Insider took a look at what it was really like to fly on the budget airline.

Flybe operated numerous routes throughout the UK and Europe. 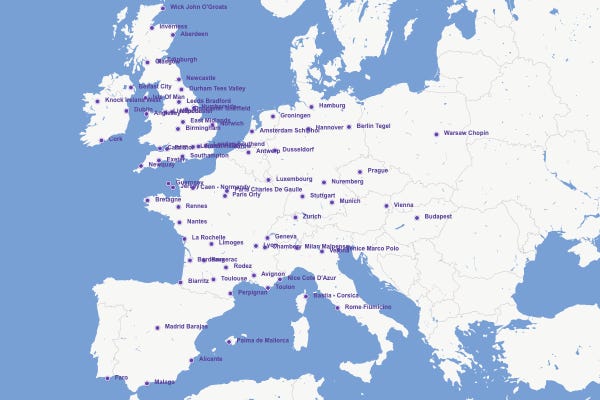 According to Flybe's website, the airline flew to more than 80 airports throughout Europe, with an emphasis on destinations in the United Kingdom. 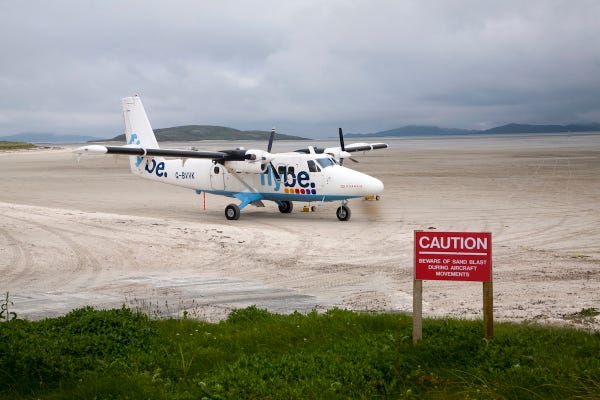 Flybe's website says the airline flew about eight million passengers in 2019. It also says that the airline offered 189 routes across 12 countries, making it the largest regional airline in Europe.

The bulk of its fleet was made up of Bombardier Q400 Dash 8 planes, which seated 78 people. 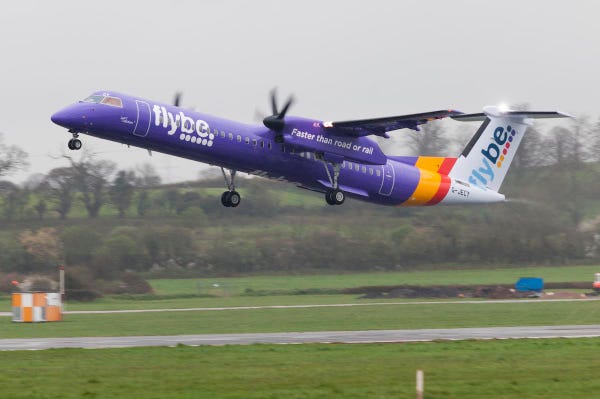 According to the aviation blog Planespotters, there were 71 planes in Flybe's fleet. Most of those (54) were twin-propelled Bombardier Q400 Dash 8s.

Flybe also used to fly Boeing 737-300s, according to Planespotters, but stopped using them in 2006. 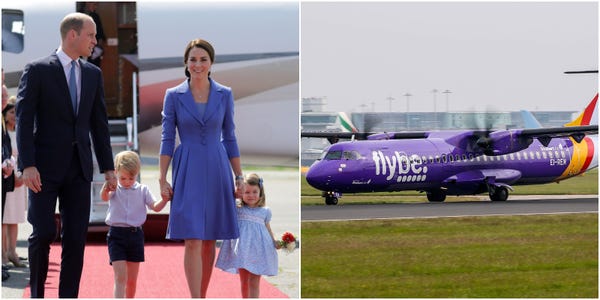 In August 2019, Kate Middleton, her husband Prince William, and their children flew on Flybe from Norwich in England to the Scottish city of Aberdeen, on tickets that cost about $89 each.

Flybe also operated a number of special flights to help the community. 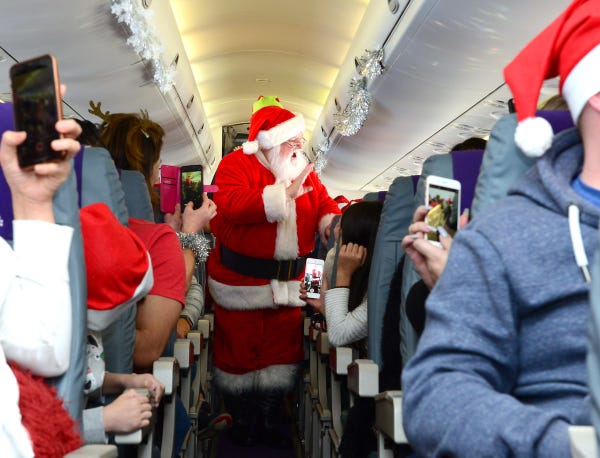 Santa Claus was a special guest on a Flybe flight for kids from Acorns Children's Hospice in Birmingham and their families in December 2019. The flight took off from Birmingham Airport, and featured Father Christmas walking the aisles and spending time with children as they were treated to stunning views of the English countryside below.

Like most airlines, check-in for Flybe flights could be done at self-service kiosks — or online. 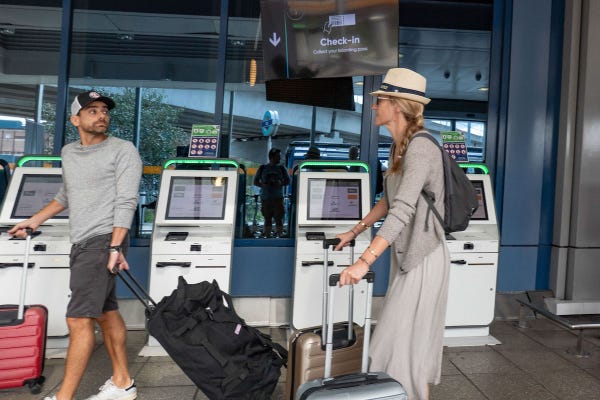 At airports such as London City Airport, check-in for Flybe flights could be done at several kiosks throughout the airport — if you even checked in at the airport at all. Like most airlines, Flybe offered online check-in, which also allowed you to print your boarding pass at home.

There were also staffed check-in and baggage drop desks. 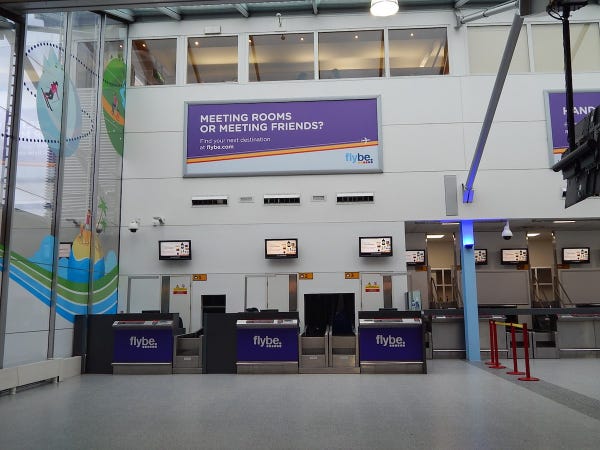 Reviewer Danny R flew on Flybe from Southampton to Manchester last May, writing about their experience for the aviation blog Flight-Report. They said the check-in area was nearly empty when they arrived for their flight. 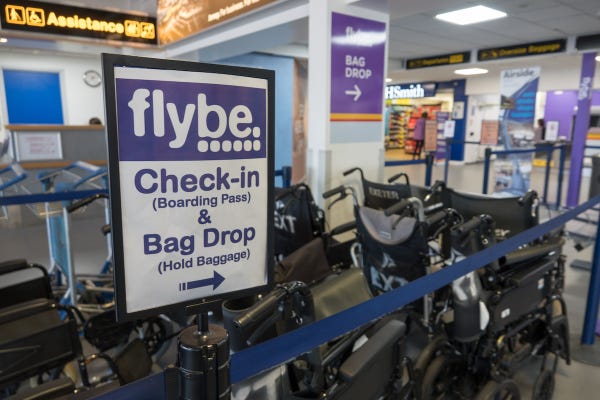 "Last year you charged me £40 ($51.70) for my hand luggage on my return flight, which was perfectly acceptable on my outbound flight," said reviewer Charles Browne on the site. "You just can't screw your customers in this way."

The reviews were not much better on Skytrax. "First and last time I fly with Flybe," said a review from user E Halrich, who reported attempting to bring aboard a carry-on bag. "Flybe still charged me £35 ($45) extra for the bag. Absolutely disgusted."

According to Flybe's website, passengers were allowed one cabin bag, in addition to a smaller bag such as a purse or laptop case. Hold luggage cost extra, though how much could depend on the type of ticket a passenger had and where they were going. 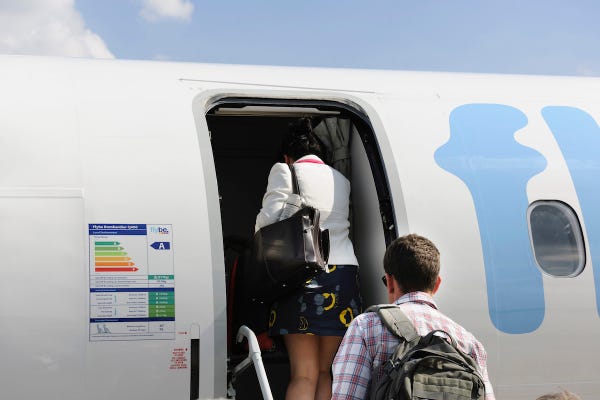 Flight-Report reviewer Flying-Kolia said the boarding process was "quick" when they flew from London City Airport to Aberdeen in 2015.

However, on TripAdvisor, many of the 8,081 reviews contained the words "not very punctual." Overall, the airline had a TripAdvisor rating of 3.5 stars out of five.

Inside the planes, purple was a popular color choice. 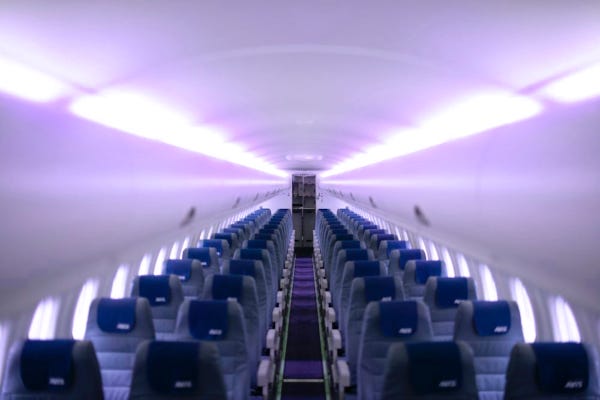 Flybe's purple color scheme — which in addition to the lighting includes carpets, seat covers, and cabin crew — was rolled out with a "brand refresh" in 2014. As the airline's then-chief commercial officer, Paul Simmons, said in a press release at the time: "Purple is not just our new brand color — it reflects our passion for delivering on our commitment to being the fastest way from A to Flybe."

Flybe's Q400 planes seated two people on either side of the center aisle. 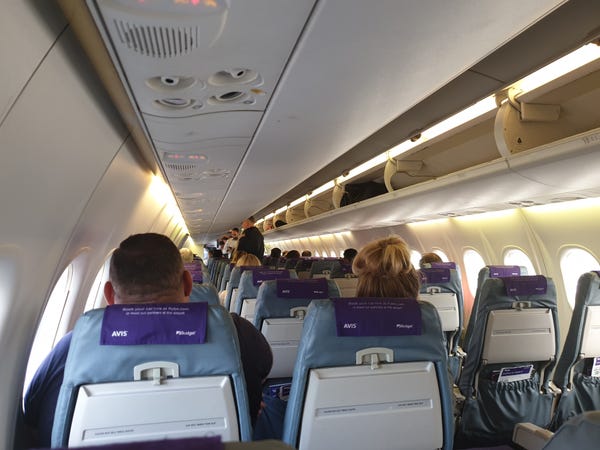 Most seats didn't have TV screens built into them.

Passengers said seats had "ample" legroom for a budget flight, though. 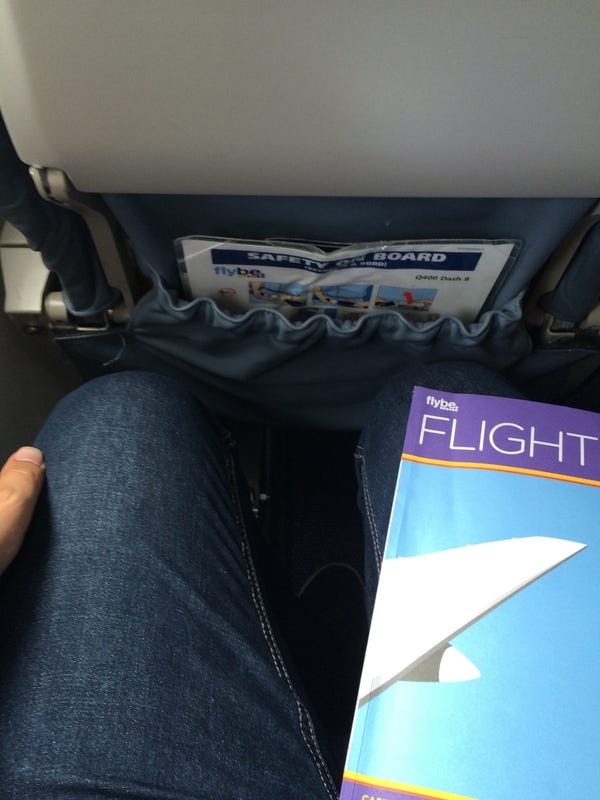 When Danny R flew on Flybe, they said there was decent legroom on board the plane. However, they said the bathrooms were cramped.

Flight-Report reviewer Bobbie D also said there was "ample" legroom when they flew Flybe from Guernsey to Southampton in July 2015.

TripAdvisor awarded Flybe's legroom with 3.5 stars out of five.

However, seats apparently only reclined on some Flybe planes. 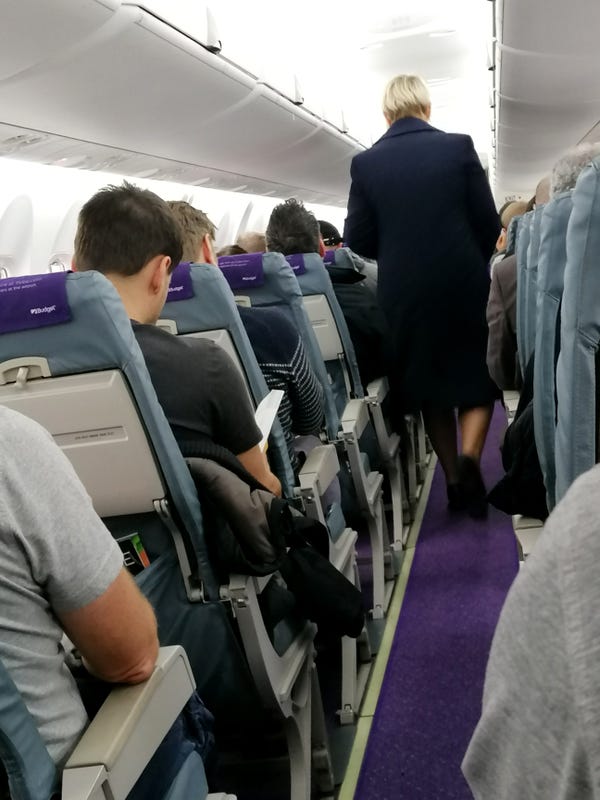 Flight-Report user Sealink said the seats on Flybe Q400 planes reclined, as they found out when flying from Wick, Scotland to Edinburgh in 2013.

However, when Flight-Report reviewer Scott 05 flew from Toulouse, France to Manchester in 2016 on an Embraer 175 plane, they said the seats did not recline.

Food and drink was available for purchase on flights. 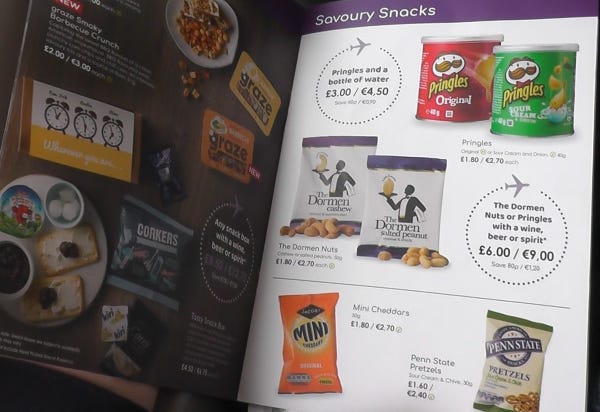 A Flybe spokesperson previously told Insider that, with an average flight time of 55 minutes, it was not typical for Flybe flights to offer an inflight meal service. However, food and beverages could be purchased from a menu found in the inflight magazine.

One reviewer described the prices of the food and drink on Flybe as "decent." 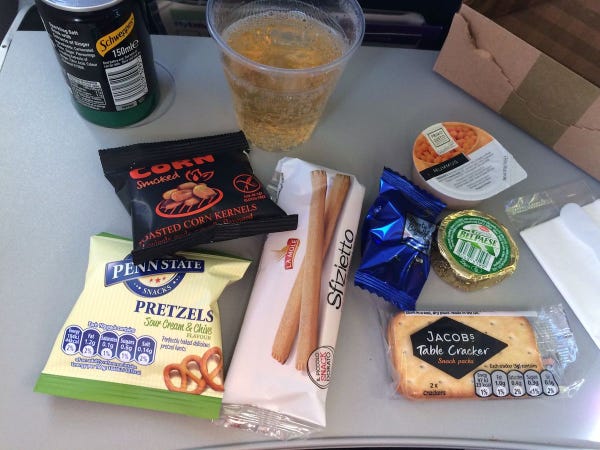 Flight-Report's Danny R said they thought the food available on board was being sold for a "decent" price.

Flight-Report reviewer Scott 05 said they were able to buy quite a lot of snacks and a ginger ale for €9 ($10) in total when they flew to Manchester in 2016.

Entertainment options on board were apparently limited. 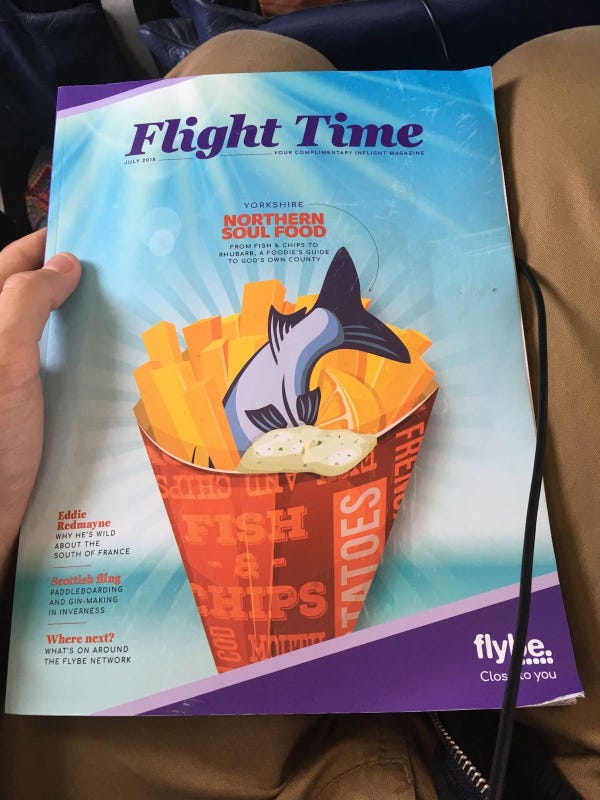 On a flight they reviewed for Flight-Report on a Q400 from Edinburgh to Manchester in 2018, Loouri reported limited entertainment options with no TV screens — but luckily there was a magazine to read. 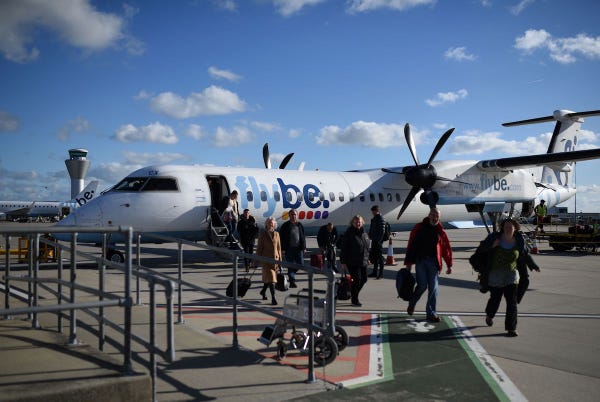 Danny R said something similar. However, they added the landing on the flight they reviewed was "bumpy."

According to Buying Business Travel, Flybe was among the UK's most punctual airlines. The site reported 76.95% of Flybe flights were on time in 2018, and that the airline was named the most punctual UK-based carrier in a Which? report published in January 2018.

However, Flybe was not on airline data analytics firm OAG's latest list of the 10 most punctual airlines in the world.

Overall, Flybe had mixed reviews in terms of value for money. 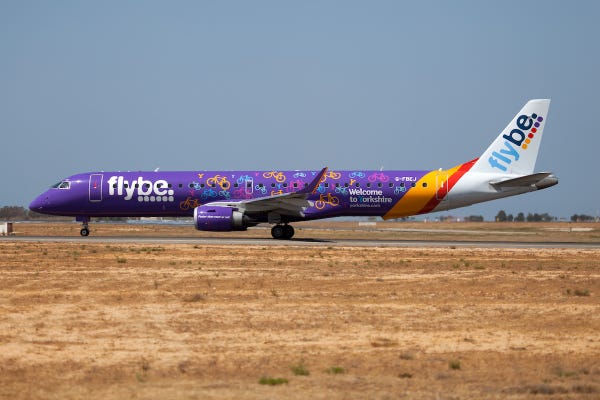 In their review, Danny R said they would "fully recommend" Flybe, calling the airline "super efficient."

Unfortunately, the future is now set for Flybe. 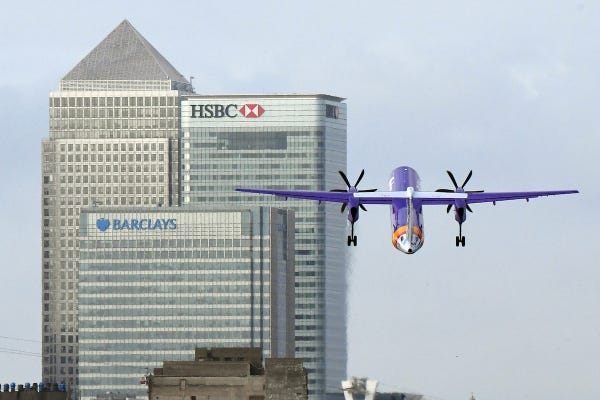 UK prime minister Boris Johnson told the BBC in January there was "no doubt" about the importance of Flybe to the UK, particularly for smaller regional airports. Customers also told The Guardian about how the airline's collapse would negatively impact their lives, including making it harder to commute to work.

According to Sky News, a £100 million rescue package for Flybe was being discussed by British government officials back in January.

Sadly, less than two months later, the airline has now entered into administration and ceased flying with immediate effect.