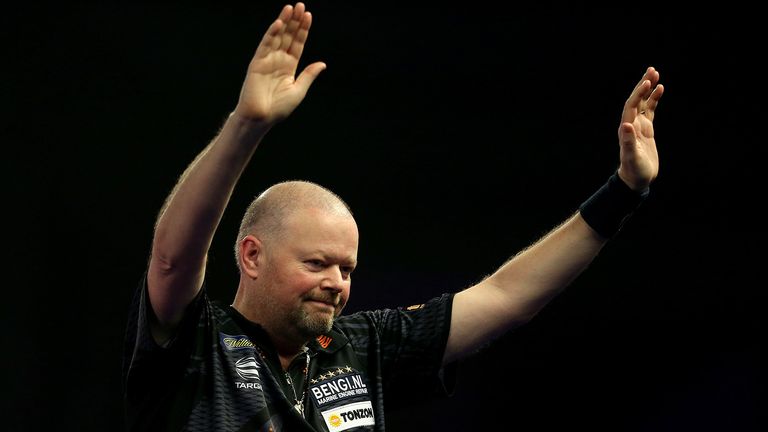 Fresh from victory in just his third tournament back in the PDC ranks, Raymond van Barneveld is back on the oche when the Pro Tour continues and Wayne Mardle is enjoying the five-time world champion’s return to action.

Do you know what? When Barney won, it was unlikely to a point, but I backed him to win on the first day because, a bit like when players have come over from the BDO – like [Stephen] Bunting, [Glen] Durrant and Chizzy [Dave Chisnall] – they hit the ground running.

So what happens to a human-being when they’re taken out of a situation and then go back into it? Because that is what has happened to Barney – he is back where he was and that’s the PDC.

?Barney working his way back up?

After regaining his @OfficialPDC Tour Card, @ColinJawsLloyd wishes @Raybar180 all the best as he starts his climb back up the rankings, how far can he go?

He’s got a new manager, Ben de Kok, and he has said to him that he needs to apply himself properly otherwise this is not going to work. He’s got a fitness regime going on, a practice regime going on and Ben is running Barney as the business that he kind of is and there’s more.

Ben is telling Raymond ‘you don’t moan at this’, ‘you don’t get down in a match and give up’, you don’t shake your head or say to everyone that you don’t like these events…show no negativity.

In my mind, Barney has to do this. He has to act that way because otherwise he’s just going to get ripped to shreds.

Barney is quite thin-skinned, he’s quite sensitive. Sometimes he doesn’t come across that way but I know him, he is and he is going to have to show a lot of fighting ability and a lot of resilience.

The one thing that he has always shown is talent. I’m not surprised he won, I saw it coming, but certainly not this soon, but I think he’s re-applying himself.

If you give it two, four, six months, we might see a drop off in that fighting quality but for now, it is there and he’s got to make the most of it.

I thought that the UK Open came at a good time for him but he got an absolutely awful draw and lost which can happen in that tournament. He will take a lot from winning this early on the Pro Tour but he really couldn’t care less about what he’s done.

A bit like Phil [Taylor] and Michael [van Gerwen] what’s gone has gone. It all about now.

Winning a tournament for the first time in years is absolutely gigantic for him, but it’s also big for the players that he is going to play on a regular basis. Now they will have that ‘Barney’s here’ feeling.

Raymond van Barneveld picks up his first win back on the PDC circuit as he defeats Ryan Murray 6-5. pic.twitter.com/dd67sr6J6b

For me, holding it together as he did against Joe Cullen says a lot about him. To get it done, when he was under so much scrutiny, I’m really pleased for him. I’m pleased for darts as well because it’s a story.

The game is lacking a little bit of character at the moment and Barney is one. He’s a champion as well.

Watch live coverage of the 2021 Premier League on Sky Sports – the action gets underway on Monday April 5 with five consecutive nights of action from the Marshall Arena, Milton Keynes.