Sooner or later, everything changes. Everything comes to an end. Garbo talks. And Liverpool lose.

We knew it would happen some time but of all the places in all of England, no one expected it to happen at Vicarage Road on a bitter evening in February against a Watford team fighting for its life. Disbelief lingered in the cold night air.

The defeat will only be cosmetic. It will not stop Liverpool winning their first league title for 30 years. But it felt like a seismic shock nonetheless. They had, after all, only dropped two points in 27 matches before this encounter. It had begun to seem likely that they would gild their title triumph by going the whole season unbeaten but two goals from Ismaila Sarr and another from Troy Deeney put paid to that tilt at history. 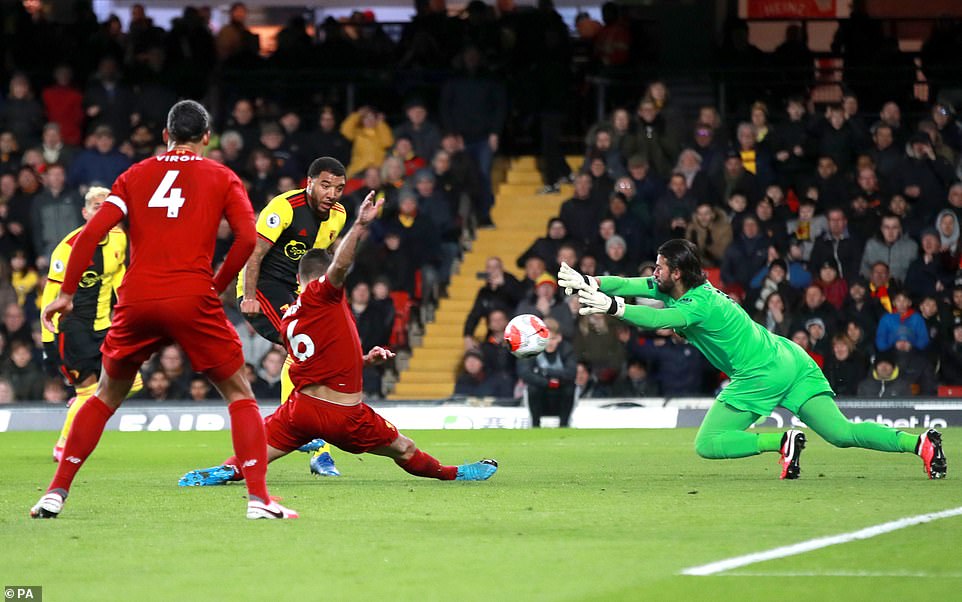 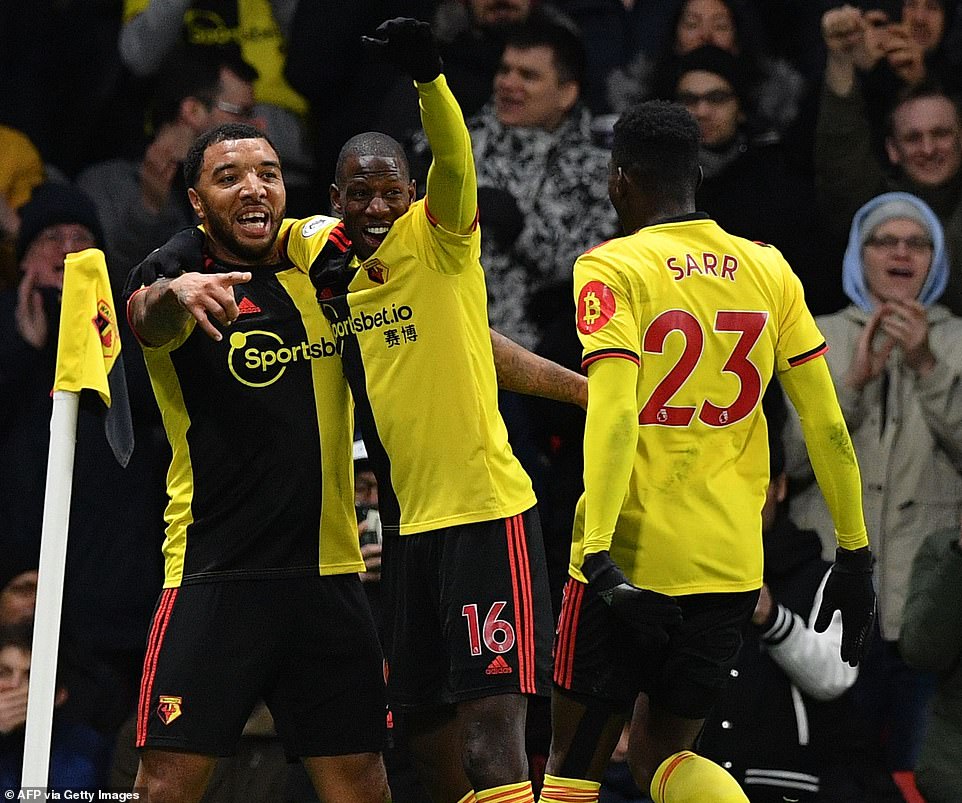 Watford turned on the form as the right time, as Liverpool wobbled for the first time all season and failed to respond 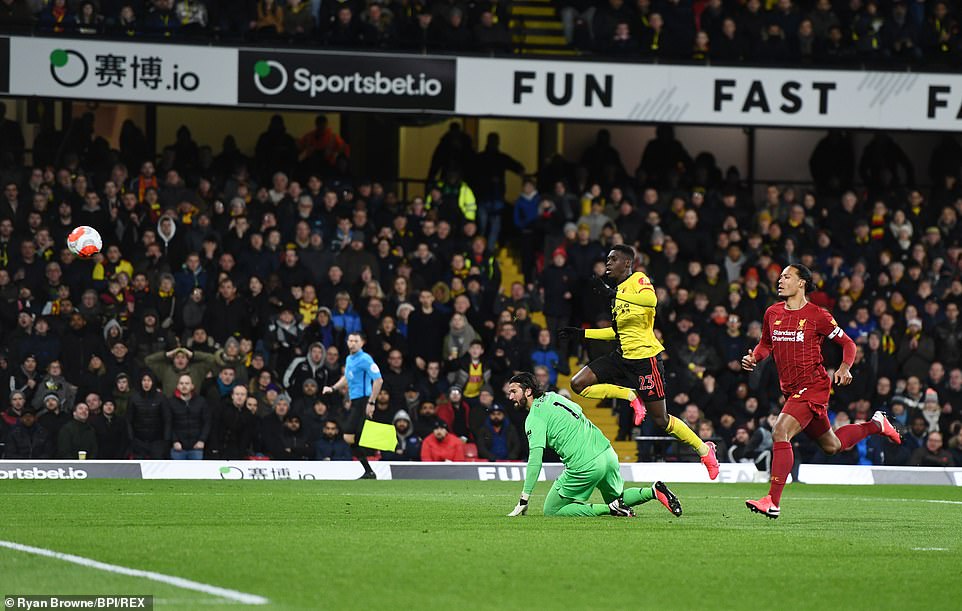 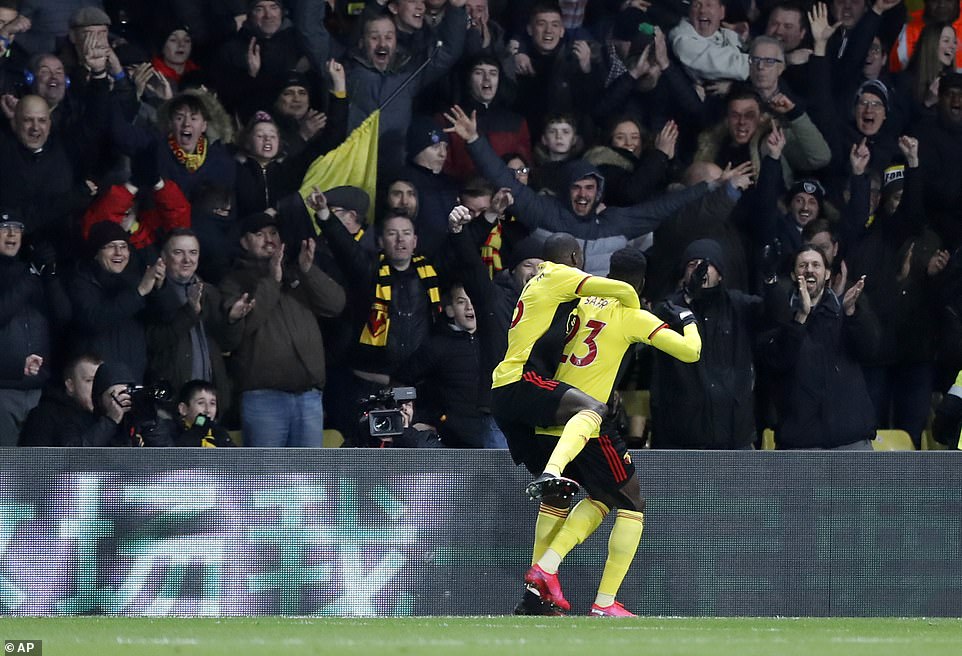 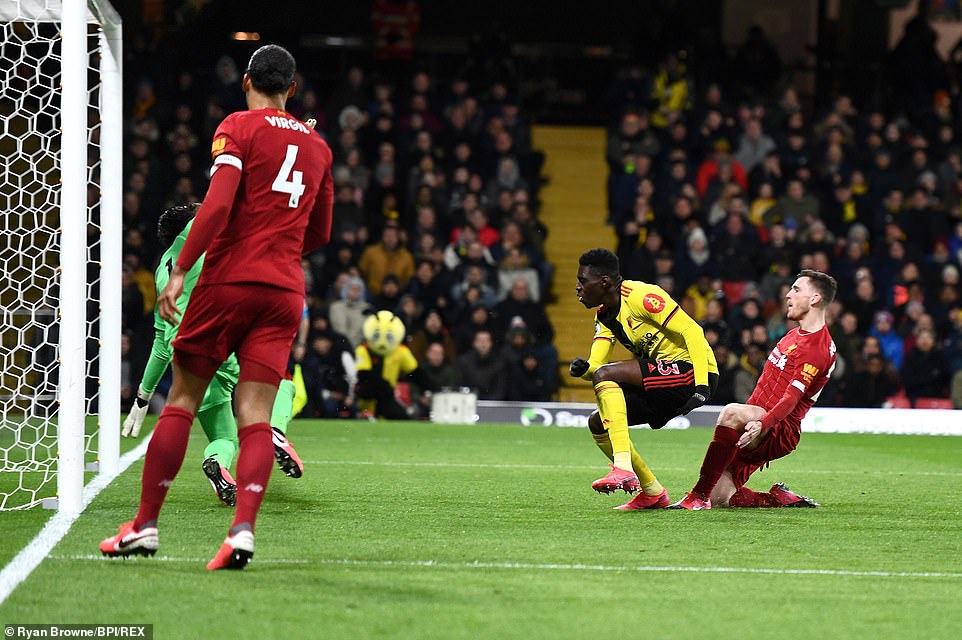 Earlier, Sarr had nipped in front of Andy Robertson to poke home a cross and give Watford the lead at Vicarage Road

Nigel Pearson’s team handed Liverpool their first league defeat since their loss to Manchester City on 3 January 2019. It means that their lead over City at the top of the table remains at a mere 22 points. This was a blow to their pride but it probably only means they will clinch the league in early April rather than late March.

But they will not emulate Arsenal’s Invincibles, nor will they surpass that team’s record of 49 league games unbeaten. Liverpool’s own unbeaten run ended here on 44 unbeaten games. It also scotched their chance of setting a new European leagues record of 19 straight wins. None of that will matter to them particularly when they are holding the Premier League trophy.

Watford thoroughly deserved their win, which moved them out of the relegation zone on goal difference. They were better than Liverpool in every department. ‘It will be tough and very physical,’ Liverpool boss Jurgen Klopp had said before the game. ‘They’ll show how much it means for them, we have to make sure we show what it means for us.’ For once, Liverpool did not do that.

By the end of the match, the Watford fans were delirious. ‘Can we play you every week?’ they sang giddily. Liverpool will get over it. It will be remembered as a blip in a marvellous league season but this was Watford’s night. ‘I just can’t get enough,’ Depeche Mode sang over the loud speaker system as the last players left the pitch. Watford will want more of this.

Season at a glance 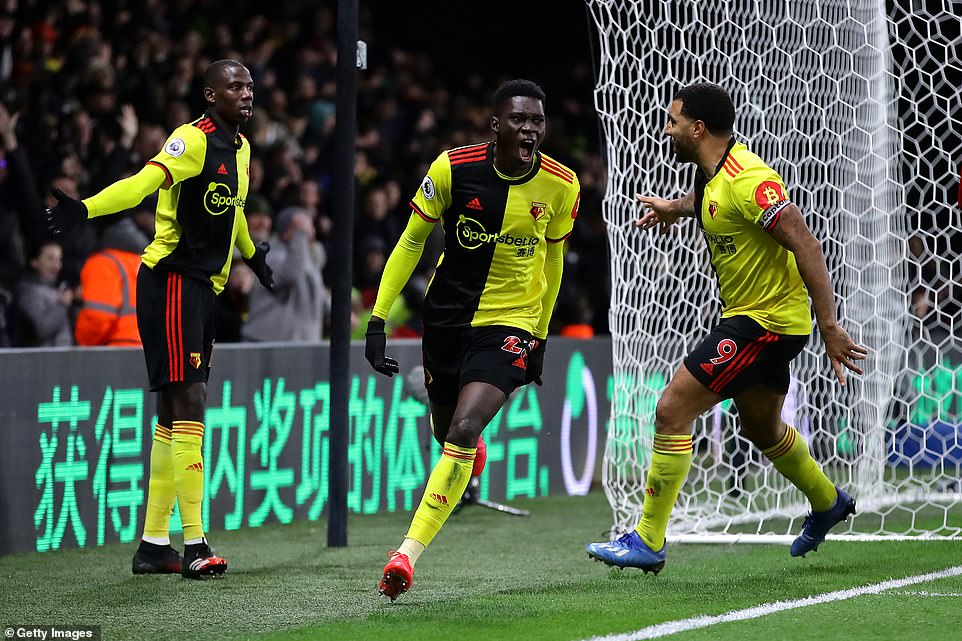 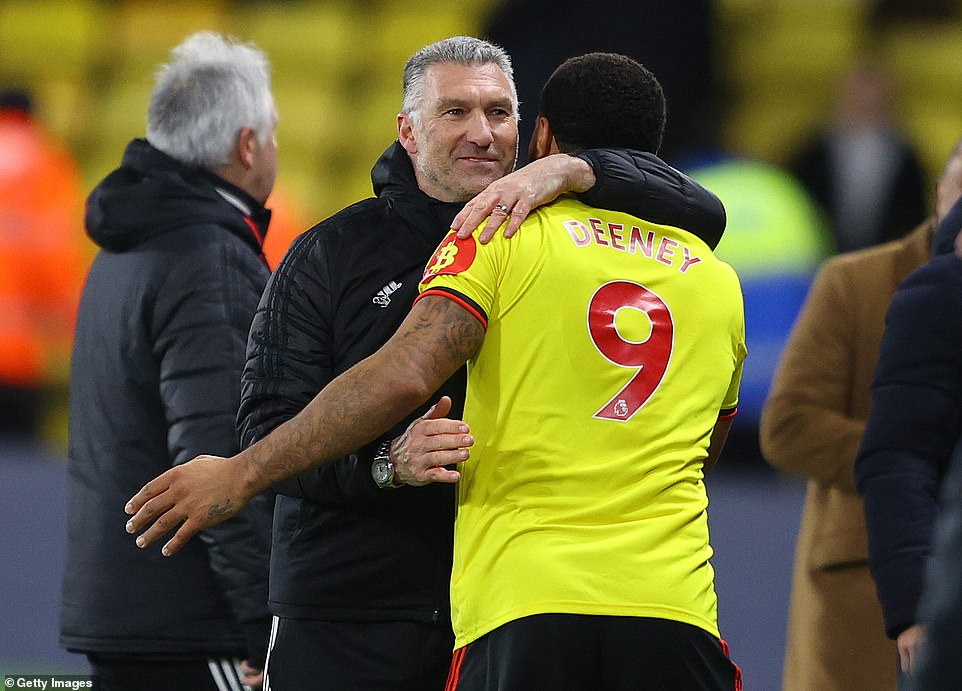 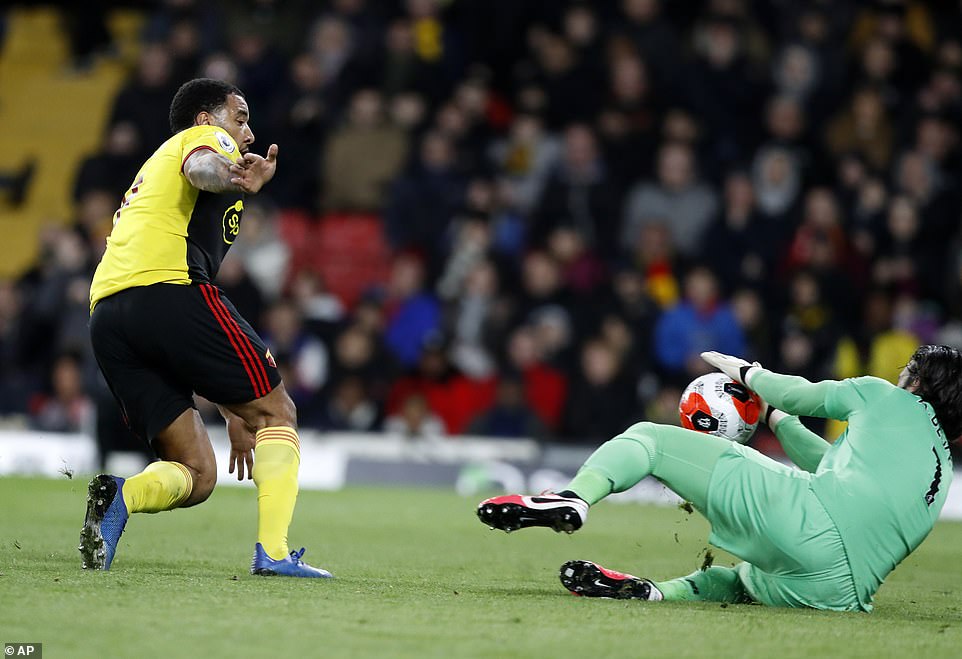 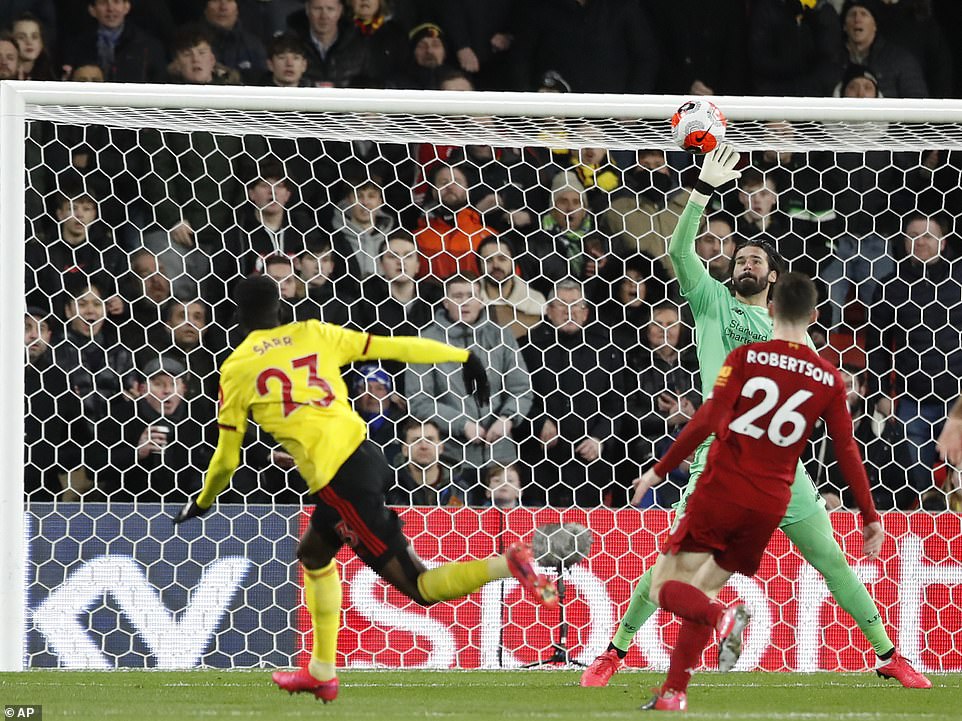 Watford created the first chance of the game after ten minutes when Abdoulaye Doucoure burst through the middle and played the ball out wide to Gerard Deulofeu on the left. Deulofeu cut inside on to his right foot and curled his shot over Alisson but just too high and it nestled on top of the net.

Deulofeu returned the favour a few minutes later as some of Liverpool’s passing became uncharacteristically sloppy. Deulofeu cut the ball back from the byline into the path of Doucoure 12 yards out but he scuffed his shot and it hit Virgil van Dijk and bounced away for a corner.

Liverpool’s only effort in the first 20 minutes was a sidefooted shot from Salah that went high into the side-netting and tricked some of the Liverpool fans in their section at the other end that they had scored. It is always a shock this season when Liverpool don’t score.

Watford were dealt a grievous blow, not just for this match but for their hopes of avoiding relegation, 13 minutes before the interval when Deulofeu challenged Van Dijk and caught his right foot in the turf. As he turned, his right knee buckled underneath him and twisted and hyper-extended. Referee Michael Oliver recognised the severity of what had happened and stopped play. Deulofeu was carried off on a stretcher, clutching an oxygen mask to his face.

It was in the fifth and final minute of the stoppage time added at the end of the half for the injury to Deulofeu that Watford should have scored. Dejan Lovren appeared to be holding Troy Deeney as he nodded a high ball clear but when Will Hughes headed the ball back into the area, Deeney challenged Alisson for it and the ball squirmed from his grasp.

Deeney pounced on it with his back to goal six yards out and turned and tried to chip it over the goalkeeper. Alisson pushed it away and when Deeney made a second attempt, it drifted just wide of Liverpool’s right hand post as Van Dijk shepherded it into touch. 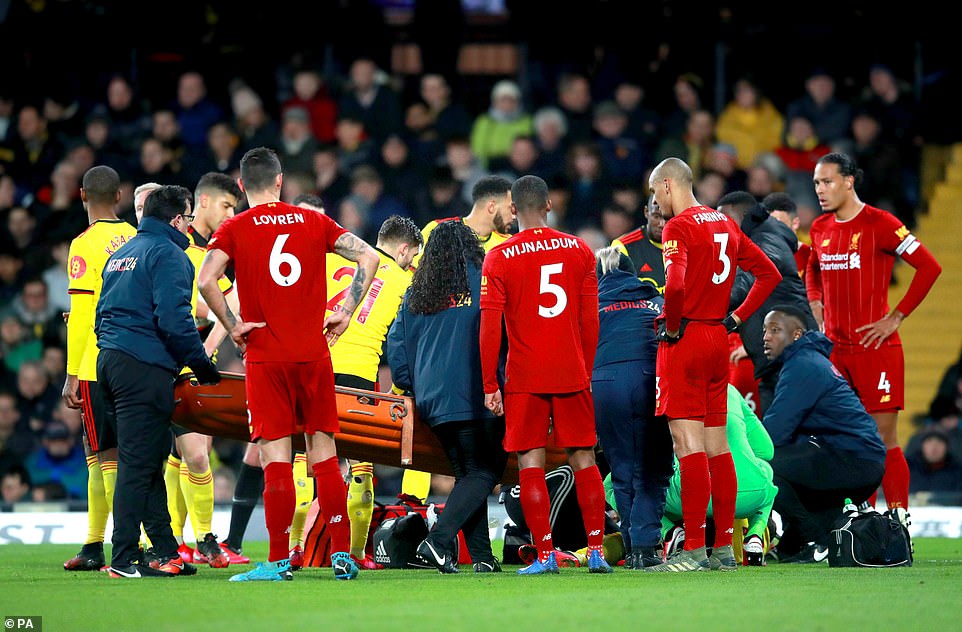 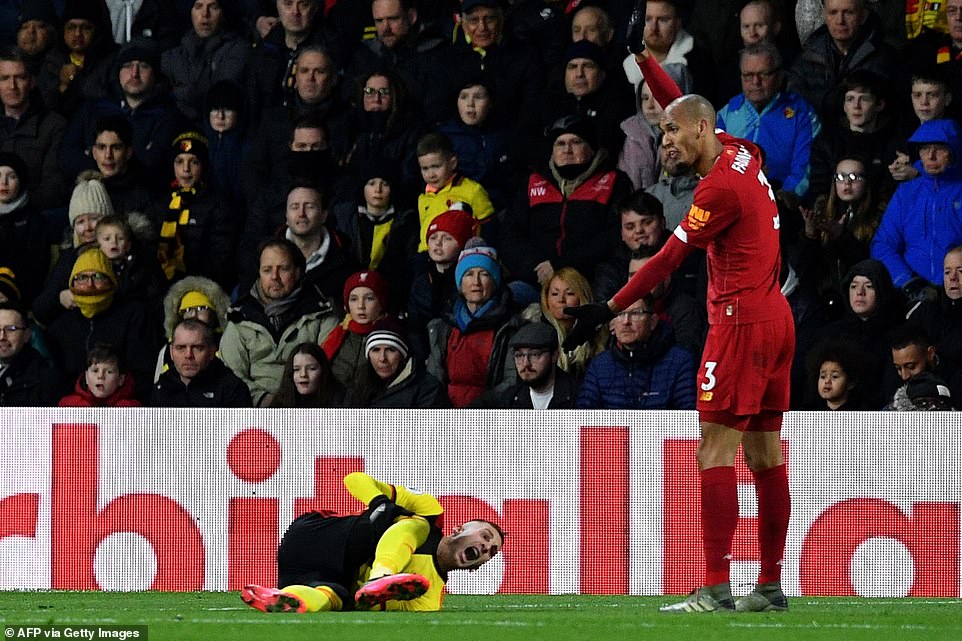 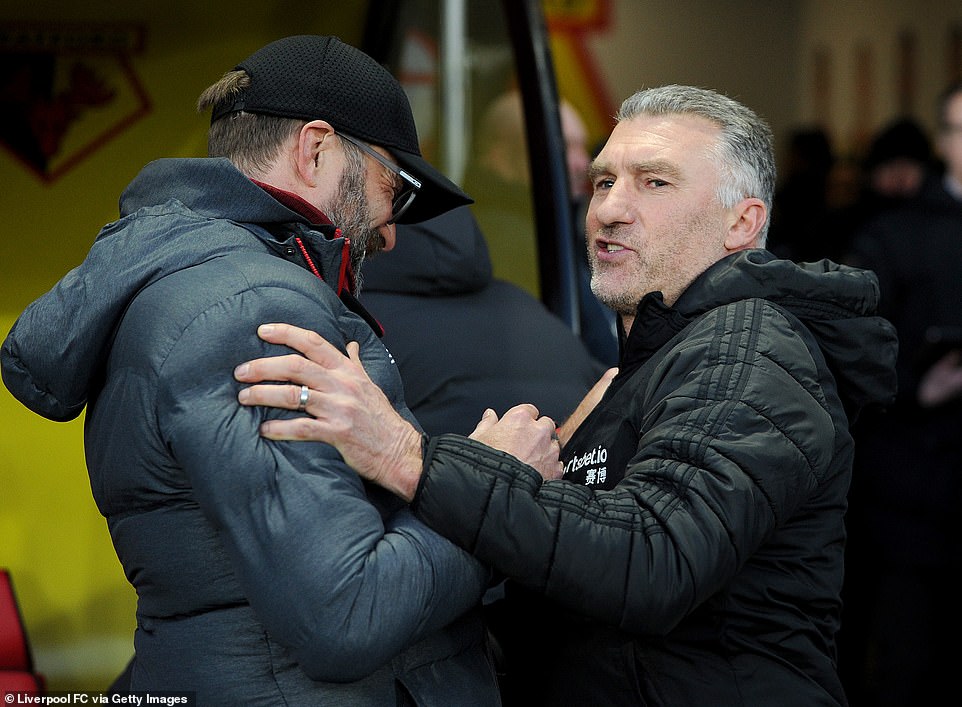 It was hardly Liverpool’s most impressive half of the season. They were second best for much of the first 45 minutes but they have shown time and time again during this campaign that they have the stomach for a fight. ‘We have to be 100% ready for these fights,’ Klopp had said the day before. ‘That’s what I love about my boys: when it’s not clicking they don’t lose desire. It is the other way.’

But Watford started the second half more brightly, too. Roberto Pereyra, who had come on for Deulofeu, threaded a pass through to Ismaila Sarr who hit a rising shot towards goal and forced a smart save out of Alisson, who tipped it over the crossbar.

Liverpool finally sparked into life when Van Dijk played Robertson in behind the Watford defence and Ben Foster had to get down sharply to beat his shot away. When the ball was crossed back in, it was too high for Mo Salah and after a goalmouth scramble, Foster fell gratefully on the ball, laughing at Watford’s escape.

That escape turned into an improbable lead nine minutes after half time. Watford took a throw from the left and when it bounced in the box, Deeney allowed it to pass over him and his marker, Lovren. The ball fell to Doucoure, who took it on his chest and volleyed it across goal for Sarr to prod it over the line.

Vicarage Road was caught between elation and surprise but they barely had time to let it sink in before Watford went further ahead. This time, the goal seemed to come out of nothing. There was a jumble of tackles on the touchline and when Deeney squirted a pass out of the melee, suddenly Sarr was running through clear on goal.

He managed his approach perfectly and as Alisson rushed out to meet him, Sarr lifted it over him expertly and it floated into the back of the net. The home support exploded with joy. Everyone else gazed on in something approaching disbelief.

Lallana, who had come on for Gini Wijnaldum, nearly dragged Liverpool back into the game when his left foot drive beat Foster but cannoned off the outside of the post.

It was the first time Liverpool had gone two goals down in a match since they played Barcelona at the Nou Camp in their Champions League semi-final but there was no second leg in this match for them to mount a comeback and Watford would not be denied.

They put the game out of even Liverpool’s reach in the 72ndminute when Trent Alexander-Arnold underhit a backpass to Alisson. Sarr was there again to intercept it but this time he turned provider. He controlled the ball and laid it calmly back to Deeney who sidefooted it high into the net. Watford were 3-0 up.