Home » Lifestyle » Washing away the jitters in nine easy steps

In anxious times, I’ve come to embrace the need to wash my hands as often as possible. It’s not just a basic safety precaution, it has become a soothing ritual, a chance to stop the news scroll for 20 seconds at a time. There are roughly nine steps to safe handwashing, and working my way through them I can rinse away the jitters along with the traces of whatever I’ve touched. 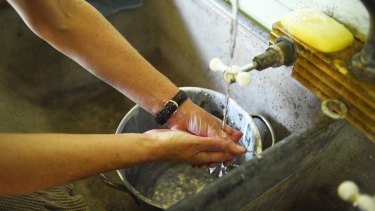 Twenty seconds at the faucet can give us back a tiny bit of control after a crowded train ride or before a meal.Credit:Nick Moir

Wet hands with water: Deus ex machina is the god in the machine who saves the day when we least expect it. He’s absent. Instead, 2020 has been the year of diabolus ex machina, the devil in the machine who ruins all our plans. From the disappointment of coronavirus-cancelled holidays to the acute distress of businesses gone up in bushfire smoke, nothing feels certain anymore.

Apply enough soap to cover hands: Lathering our hands for at least 20 seconds seems to be the only medical advice that has been consistent. Soapy scrubbing can remove the invisible menace we might have picked up on a table or a door handle. Twenty seconds at the faucet can give us back a tiny bit of control after a crowded train ride or before a meal.

Rub hands palm to palm: Singing happy birthday to myself twice, as the World Health Organisation recommends to make sure you spend 20 seconds at the task, has been wearing thin. I’m thankful to William Gibson, a 17-year-old high school student from the UK who made a website on the weekend that puts the lyrics of any song under the WHO handwashing diagram. I’ve tried Talking Heads, Miley Cyrus, nursery rhymes. A-tishoo, a tishoo, we all fall down.

Right palm over left dorsum with fingers interlaced, and vice versa. It’s time for those who call this all a media beat-up to just shut up. I’m thinking particularly of Prince William blustering it all away at some meet and greet like it was just some gossip about his brother. His odds of coming through this with his health and job intact are extremely good, especially if he follows his father’s form and stops shaking hands. We need to stop saying that coronavirus only kills old people, as if their lives weren’t precious to us. Washing my hands helps protect other people from me.

Palm to palm with fingers interlaced: Scepticism may be healthy, but the pull of superstition grows strong in uneasy times. How do I pray for a cure if I don’t believe? The sign of devil’s horns, made with index and pinkie finger, used to be cast to avert the evil eye, before it became a heavy metal salute and then a stupid emoji, stripped of impact. Clasping my hands at the sink feels like a prayer, made less embarrassing by its scientific pedigree.

Backs of fingers interlocked: The other effective method of reducing the spread of a pandemic is social distancing, and it will be here soon enough. If we cannot go to the footy, to the show, perhaps even to school or work, we will be lonelier. As it proved during the bushfires, this is when social media can be used for its original purpose: community. I watched the videos of dance classes in China, millions of people alone in their rooms, united in movement. I am already reaching out more online to family overseas or friends sitting alone at home nursing suspect colds. Communities can and will form online. This loss of regular contact will be harder on us than we realise. Don’t mock it.

Rotational rubbing of thumbs in clasped hands: This may be the new normal but we know it isn’t forever. Many of us haven’t lived in such interesting times before. Others have endured far worse. This isn’t the only story out there. I spent our awful summer wishing for the time when some other issue would dominate the news. We barely noticed the first stories of that strange new flu in northern China. But eventually the fires go out, the vaccine is produced, something else comes along instead to surprise us.

Rotational rubbing of palms with fingertips: Turns out that following all the steps of proper handwashing also provides a massage, rubbing out the tension from digits that have been gripped around my phone all day texting and scrolling, the fingers hammering the keyboard. It’s a moment to switch off and breathe and just focus on the present for 20 seconds at a time. The future is coming for us fast enough.

Rinse and turn tap off with towel. Dry hands. They are safe.

Michelle Griffin is a senior writer.