Education Minister James Merlino has pledged to tackle “school gatekeeping” – where students with disabilities are steered away from a particular school – describing it as an “ugly lottery” for parents.

Mr Merlino said the Victorian government’s $1.6 billion changes to student disability funding – which was announced in the 2020 state budget and will be rolled out in 340 schools this year – would ensure every school was “truly inclusive” for students with disabilities. 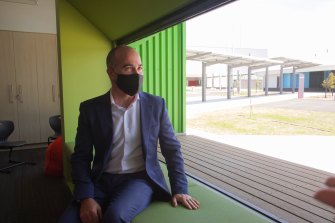 “It’s not one or the other, we need a suite of of education settings so parents and children find the one that works for them,” Mr Merlino said.

Under both state and Commonwealth laws, schools must make “reasonable adjustments” to accommodate students with disability.

But a 2018 study by Monash University’s Castan Centre for Human Rights Law found 15 per cent of families had difficulty enrolling their disabled child in a mainstream state school in Victoria and the same proportion felt pressured to leave the school.

“This often takes the form of school leaders discouraging parents from seeking enrolment for their child, on the basis that the school isn’t the right ‘fit’ for the student, or can’t accommodate the student’s needs,” the report said.

Mr Merlino said this practice – commonly referred to as gatekeeping – was devastating for parents and children.

“The ugly lottery was the phrase that a number of parents used and that was about whether their local school was inclusive and welcoming to students with additional needs, or whether they said quite bluntly ‘little Johnny, little Julia, will be better at the school down the road,” Mr Merlino told The Age.

“We need to not only reform the PSD [Program for Students with Disabilities] funding but also ensure that every school is truly an inclusive school and that’s to do away with the days of the ugly lottery for parents.”

The number of high-needs students who receive extra support in the classroom will double to 55,000 by 2025.

Currently just four per cent of students in government schools are eligible for support such as teacher aides under the program.

Children must obtain the “right diagnosis” and meet rigid benchmarks to qualify for funding, under what Mr Merlino calls a “deficit-based approach”.

This will be scrapped under the funding changes, which will be implemented state-wide by 2025.

Instead more than 100 facilitators – a newly-funded role – will meet with parents and schools and discuss the strengths and learning needs of students with a disability and how they can best be supported.

Mr Merlino said some students who had previously missed out on targeted funding – such as those with autism, dyslexia and behavioural issues – could now be eligible.

Schools would also receive extra money which they could spend on specialist staff, equipment and training for teachers, which would benefit the one in five Victorian students – about 130,000 – who have additional needs.

Jacinta Parkinson’s son Kaleb has autism but did not meet the rigid criteria for autism spectrum disorder under the former funding model because he had excellent language skills.

In 2012 Ms Parkinson was forced to try and obtain funding for him under an alternative criteria: severe behaviour disorder.

After spending six months trying to prove he qualified under this criteria, Ms Parkinson eventually obtained a classroom aide for Kaleb. 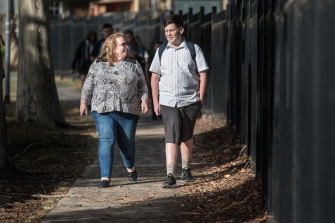 “It was really taxing mentally because you have to paint your child as a monster,” Ms Parkinson said.

“You have to tell them the worst possible behaviour that they’ve displayed. And that’s awful to do because you want to build your child up, not knock them down. It was a very tiring, mentally draining, physically draining process.”

In 2018 Kilberry Valley Primary in Hampton Park was one of 100 schools to pilot the new funding model.

Ms Parkinson, who was school council president at the time, said it was a game changer.

The school used the funding to employ a special education teacher who worked with classroom teachers and ran small group sessions with students who needed additional support.

“And that’s what made the difference because the teachers were a bit lost with how to to manage a lot of the learning difficulties within the classroom,” Ms Parkinson said.

“Having somebody come in and really be able to help put some of those routines and strategies in place made it much easier on the classroom teacher, which then also made it easier for the kids.”

Ms Parkinson said you could see the difference in the playground.

“It’s hard to describe but you could just see that a lot of their stress levels had gone and they were interacting more with other kids.”

Kaleb is now in year 8 at Rowville Secondary College where he attends mainstream classes.

“Parents should be able to make choices about their child’s education with confidence that their child will have every opportunity to reach their potential,” Mr Hodgett said.

“Equally, schools should be able to accept all students in the full knowledge that they will receive funding to support all children, whatever the level of their abilities. The criteria needs to be clear and transparent so that it is fair and well understood.”

Phil Hayes-Brown, chief executive of disability support organisation Wallara, said the $1.6 billion boost sounded great but fears there will be a lack of training for teachers.

“Inclusion is not as simple as putting ramps in for wheelchairs, there’s a lot more than that,” says Mr Hayes-Brown, whose daughter has an intellectual disability.

“I urge Minister Merlino in rolling out this initiative to ensure that the critical teacher-training component is not overlooked.”

In 2015 the Victorian government announced all registered teachers would be required to focus on teaching students with disabilities as part of their professional development and aspiring teachers would do a component in their tertiary studies.

But Molly Watts, who is studying a Bachelor of Inclusive Education at Monash University, says she believes the unit taught in mainstream teaching degrees is not enough.

“With the current mainstream degree, you are not really equipped as a pre-service teacher, moving into being a classroom teacher,” Ms Watts said. 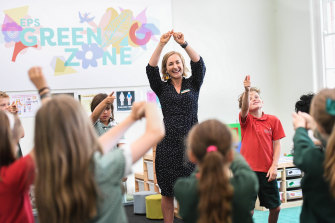 Elsternwick Primary was one of the schools that piloted the new funding model.

Assistant principal Nicola Smith said the school used part of its funding to establish a “green zone” inclusive classroom after meeting with a facilitator and the families of students with disabilities.

The inclusive space, which has a Lego and reading corner, yoga mats and soft toys, is used as an indoor retreat space for children who find the school yard overwhelming at lunch and recess, to teach the wellbeing curriculum and for therapy sessions.

“When you start talking to kids and get their perspective you realise that the traditional set-up of a classroom doesn’t always work for everyone and they can find it quite overstimulating, so having a different space can really work for them.”

Ms Smith said after participating in the pilot, the leadership team at Elsternwick Primary had completed an autism leaders inclusion course.

This taught them strategies such as using visual schedules with pictures of what is going to happen throughout the day, colour-coding subject textbooks and putting calm kits in every classroom that contain sensory objects such as squishy balls or fidget toys that help children calm down.

Ms Smith sees teacher training as one of the big advantages of the new disability funding model.

“If we are going to have inclusive education, teachers need to know how they can best support kids.”