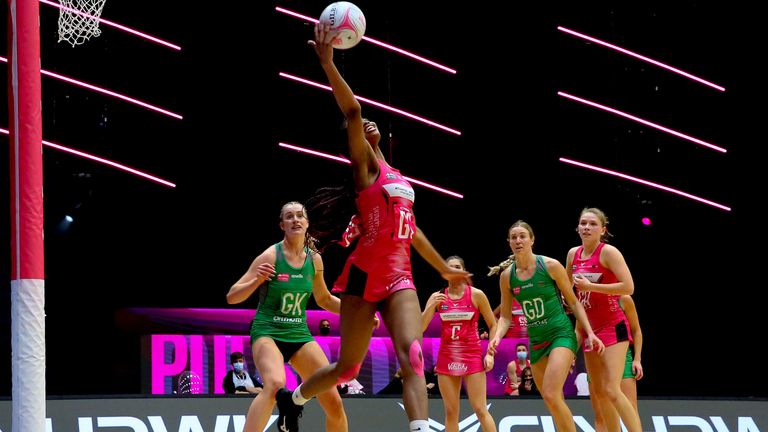 London Pulse produced an emphatic display to bring their winless start to the Superleague season to a halt, while Leeds Rhinos picked up a big win in a thriller against Strathclyde Sirens.

A four-day Superleague weekend that started with Team Bath making a huge statement with victory over champions Manchester Thunder ended with London Pulse winning the battle of the winless teams, and Leeds Rhinos claiming a priceless victory over Strathclyde Sirens.

Having entered Monday night’s action without a victory in nine games between them so far this season, there was as much on the line for London Pulse and Celtic Dragons as anyone over the bumper Superleague weekend – and it was Pulse who emerged victorious.

A towering first-half display was enough for Pulse to get off the mark for the season – a surprising quirk of this unique season given that Sam Bird’s team had taken the 2020 campaign by storm with three wins from three until the coronavirus pandemic forced the season to be cancelled.

Funmi Fadoju, Ellie Rattu and Hamilat Adio dazzled throughout as Pulse took all the positives from Sunday’s match with Loughborough Lightning that saw them push the league leaders all the way into a dominant display and well deserved three points.

Earlier in the day, Dragons had found out that they had received a three-point deduction and fine for having two overseas players in the same area of the court earlier in the season – and while it was not administrative, mistakes cost them dear on the court again. 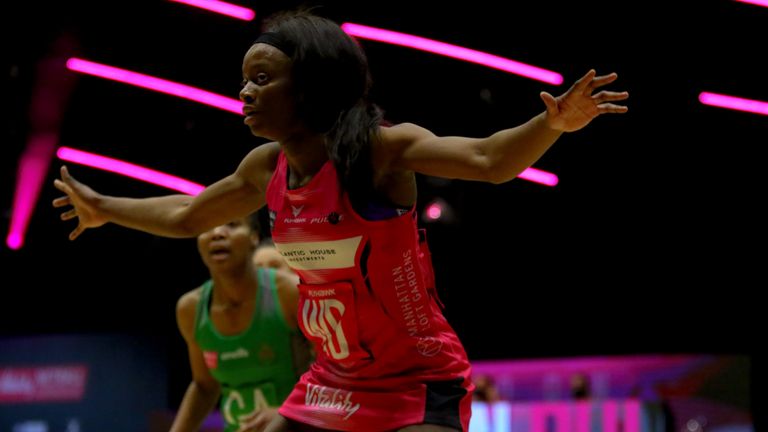 Having stayed competitive throughout the first quarter, Dragons imploded at both ends on the court in the second period as Sigi Burger and Kira Rothwell in attack punished a loose defensive display from the Welsh franchise. Remarkably, Pulse claimed the quarter 20-3 as their defensive prowess matched their shooting success.

By half-time, Pulse had all-but secured their first three points, leading 33-12, Bird took the opportunity to try out a host of combinations as they saw out the win in the face of a dogged response from Dragons.

"It really does matter, at the end of the day this is a competition."@BirdBeers reflects on @Pulse_Netball's 56-29 victory over @celtic_dragons.

Olivia Tchine took over from Burger under the post but there was no let up from Pulse who racked up their highest goal tally of the season while Amy Clinton continued her impressive start to the season for Dragons, who showed flashes of what they can do in a competitive second period.

Leeds Rhinos won a pulsating clash that stopped Strathclyde Sirens from moving into the top three of the Superleague, a contest that ebbed and flowed eventually went the way of the Rhinos, who ran out 43-36 winners for their third success of the debut season.

Ever since suffering injuries in the opening weeks of the campaign, the Rhinos have had to dig deep and Dan Ryan used all the options from his injury-ravaged squad to stay just in front of a Sirens team that threatened another late comeback.

Eventually, it was Rhinos’ ability to maximise the turnovers and limit their own errors that saw them across the line as Sirens were left to run a couple of missed opportunities as the match ticked into its final minutes.

Sirens had fought back superbly to draw with Saracens Mavericks on Sunday night and after a slow start, they performed brilliantly to end the first quarter on the front foot and with the scores all square at 9-9.

Both franchises fielded teenage goalshooters and both Emma Barrie of Sirens and Sienna Rushton of Rhinos delivered performances belying their year, Rushton’s form crucial at the start of the second quarter as Leeds opened up with a five-goal unanswered run

As has been the case for much of the season, Sirens’ Towera Vinkhumbo, the Malawian goalkeeper who has also played international football for her country, forced a couple of trademark interceptions as the Scottish franchise closed the half on the up and in touching distance at 20-17.

With nothing between the teams across the third quarter, they shared 24 goals, the final game of a dramatic weekend fittingly went the distance, Sirens having drawn level at one stage only to see Rhinos pull away again.

And that was the theme down the stretch, Sirens forcing the errors but unable to maximise under the post while at the other end, 19-year-old Rushton remained ice-cool to seal the win and move to within a point of the top four.

Sky Sports is your home of netball. The Vitality Netball Superleague continues on Monday, with two matches live on Sky Sports Arena and Mix, plus streamed on the Sky Sports YouTube channel from 5pm.