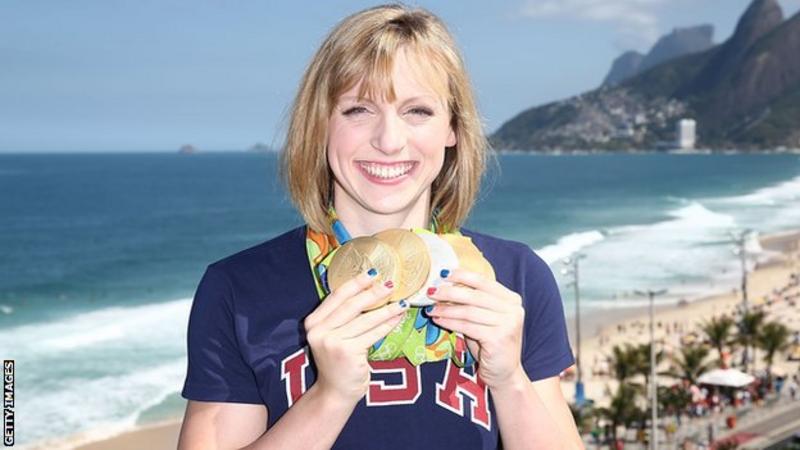 A group of American athletes will provide samples for drug-testing in a “virtual session” as part of a “unique” programme being trialled by the United States Anti-Doping Agency (Usada).

Social-distancing measures have meant a reduction in traditional random sample-collection, with some countries halting testing entirely.

That has led to fears that cheats may look to exploit the situation.

But Usada’s trial will mean officials can follow the process remotely via video conference technology – with a camera placed outside the athlete’s bathroom door.

Five-time Olympic swimming champion Katie Ledecky, and runners Allyson Felix, Noah Lyles and Emma Coburn are among the stars who have volunteered to take part.

“How unfair is it to be questioned just because there’s a period of time, through no fault of your own, that testing isn’t able to be accomplished at the level that it was?

“Out of that frustration the team here said ‘we have to give some solution, and have to reinvent ourselves’.”

How does it work?

Athletes are sent drug testing kits and testers call them during a one-hour daily window over Zoom or Facetime.

“We have them unseal the kits, they’ll go into the restroom when they’re ready to urinate, they’ll show us the restroom, put the camera right outside the door, and we time how long it takes,” says Tygart.

“For obvious privacy reasons, we’re not actually watching as we do for a normal in-person collection, but we include a thermometer which they have to use to ensure the sample provided is in line with body temperature.

“We can see that being done, they then come back, we record the sample numbers and then they seal and package it up for collection and analysis.”

Blood samples are also provided with the athletes using a plastic pin-prick tool that they administer themselves by pressing it against their upper arm.

“We know the gold standard is no-notice in-person tests, but we said ‘look there’s a problem we have to solve’, so we believe we’ve put in very strong safeguards” said Tygart.

“The temperature monitor, timing how long it takes to urinate, and we can also compare the steroid profile in the urine to previous samples, and their blood sample.”

‘Athletes are willing to go the extra mile’

The shutdown of domestic sport has meant there is now no in-competition testing, and the number of out-of-competition tests has been cut back drastically. But by going online, the hope is that the battle against performance-enhancing drugs can still be continued.

“This is a volunteer programme,” says Tygart.

“These athletes are willing to go the extra mile and volunteer to demonstrate clean sport matters.

“They said ‘we’re happy to do it because we’re clean and we agree this can help anti-doping’, and we were overwhelmed by the response frankly.

“This is not only an effort to solve the short-term problem of reduced, if not zero testing happening in some parts of the world.

“It’s also an effort to see long-term can we make it easier and more convenient for athletes and reduce the cost so we can have more tests.

“We’ve had great conversations about this with other anti-doping agencies in Norway, Germany and Canada, so we would hope the World Anti-Doping Agency (Wada) embrace it and roll it out in other parts of the world.

“We know some athletes will go to great lengths even when fully operational programmes are in place. So we would be naive and foolish to think some aren’t trying to do that when they’re significantly reduced.

“Here in the US we’ve made it clear we’re only doing mission-critical testing, and that’s a reduction in our otherwise fully-operational programme.

“So finding ways to test in safe and healthy environments like virtual testing is one solution to try to make sure that those who might try to get away with it don’t.”