Government rules and corporate structures have conspired to prevent staff at both a Woolworths-owned pub business and a charitable childcare provider getting the $1500 fortnightly JobKeeper payments.

In late March, the Woolworths-owned Australian Leisure and Hospitality Group stood down 8000 workers following the government's decision to shut pubs and clubs to halt the spread of the coronavirus. 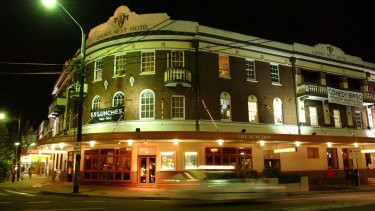 Staff at Woolworths-owned hotel venues will not be eligible for JobKeeper because of the strong performance of the company’s liquor stores.Credit:Adam Hollingworth

But despite essentially stopping trade, ALH will not be eligible for JobKeeper because of an unfortunately-timed restructure that pulled the pubs under the same corporate Endeavour Group as prospering drinks businesses Dan Murphy's and BWS.

Woolworths put ALH under the Endeavour banner in January, long before the pandemic upended Australian life, in preparation for a massive $10 billion de-merger, which it has since had to delay.

A spokesperson for ALH confirmed despite the company asking the government to be included in the JobKeeper program, "under the current legislation we don't qualify".

Companies with over $1 billion in annual revenue need to show a 50 per cent downturn before they can get the wage subsidy, but for the purposes of JobKeeper, ALH can't be separated from the entire Endeavour Group, which has not seen revenue decline sufficiently.

"Smaller businesses have a different level of capability and a higher level of vulnerability in dealing with the significant cash flow issues," Mr Morrison said. "I mean, it's like comparing Qantas to a corner shop."

The charitable services wing of the Uniting Church in NSW and the ACT will also miss out on JobKeeper even though its early learning arm has been devastated by parents keeping children home.

Charities have to only see a 15 per cent revenue fall to get JobKeeper for their staff, but Uniting's revenue overall has been propped up by its nursing home division and government grants — money that largely cannot be used for childcare and is all counted within the one entity.

Big banks are also excluded from JobKeeper subsidy, but not from the coronavirus-driven downturn, which has forced the National Australia Bank among others to stop hiring staff.

That has resulted in 180 staff, whose roles the bank had made redundant before Australia felt the full brunt of the pandemic as part of a restructure, losing their jobs rather than having the opportunity to be redeployed.

Finance Sector Union secretary Julia Angrisano said the bank should have redeployed the staff to an area seeing increased demand because of coronavirus, including call centres and loans.

"They're really concerned about finding future employment in this environment," Ms Angrisano said. Five staff represented by the FSU have filed a Fair Work Commission complaint to challenge the bank's decision, which Ms Angrisano said meant they would finish up by mid-April.

One worker facing joblessness, who declined to give her name because of the bank's media policy, said losing her job would hurt her family.

"I am living pay cheque to pay cheque yet I have never allowed my personal circumstance come in the way of being dedicated to my job," she said.

A spokesman for the bank said it had redeployed an additional 50 staff to frontline services and was giving payouts as well as six months of coaching and training to the staff who had been let go.

Other big businesses are considering applying for JobKeeper. Caltex said it had "not been immune" from the financial impact of coronavirus, which has forced people to drive less, and "will apply to access payments where we can to support our people and jobs across our business".

Advertising company and owner of youth news website Junkee, Ooh! Media, also said it was looking at the JobKeeper law, which passed Parliament on Wednesday night, to see whether it was eligible.