A century ago the surest thing to shrug off your worries was a reel or two of silent slapstick set to a jaunty soundtrack. One hundred years later, the world’s fastest growing social app is serving up exactly the same thing. 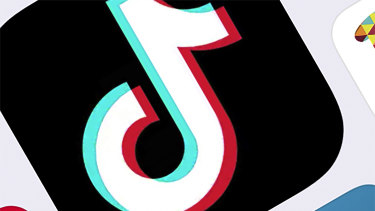 When TikTok makes the news pages – as it regularly does – the coverage typically relates to the mobile app’s financial success, its global reach or its potential as a privacy threat. Last year the app came under fire for whitewashing the Hong Kong protests – TikTok is owned by Chinese company ByteDance – and deleting videos critical of China’s mass detention of its ethnic Uighur population.

People in the 1920s didn’t flock to the moving pictures because of what they read on the business or politics pages, however, and discussing market position or national allegiance doesn’t tell you much about the art of TikTok. If you just spat out your beverage reading the words "art" and "TikTok" in the same sentence, be sure you’re not alone.

Everyone’s initial encounter with the app is a confusing one. The first few minutes are a stream of banal, unfunny or just plain irrelevant 15-second videos that seem poorly shot and clumsily constructed. In 2020, the experience of wading into a corner of the web that hasn’t been carefully curated to grip your attention is profoundly unsettling.

This is because TikTok doesn’t know you yet. Where other social platforms connect you with friends, family or colleagues, TikTok doesn’t care about people you may know. It’s only concerned with what you actually want to see, and once the app’s algorithm really gets to work – analysing why one video holds your attention just a second longer than another, or why you swiped back three videos to watch one over again – the AI powering its recommendations engine begins to feel scarily godlike.

That’s when the art of TikTok begins to reveal itself. It took the film industry decades to establish itself as a coherent system with its own internal logic, but in just a few years TikTok has done the same. What seems messy and chaotic at first quickly coagulates into a highly coded and creative ecology that pillages older media forms – from Funniest Home Videos to vines – and repurposes them to new ends.

The opening bars of AC/DC’s Thunderstruck are recreated using only a baby’s gurgles. God invents seahorses: "what if baby saxophones could swim?" A woman correctly inserts a USB stick on the first try and a heavenly chorus erupts.

If this sounds like cringey internet fare circa 2005, it’s because the artistry of TikTok doesn’t translate well into words. It’s important that most of its videos are without speech, since the musical soundtrack does so much of the talking. When words are needed, they’re delivered via on-screen captions.

Nineteen-year-old Victorian Heath Kirley posted his first TikTok in January last year. He’s standing in his kitchen putting the finishing touches on a cryptic yellow costume with an oversized M on his chest as the early bars of Soulja Boy’s Pretty Boy Swag play out. When the bass drops, he’s transformed into the yellow M&M.

A year later, he has 2.1 million followers.

At first TikTok was just a private joke, a place to post whatever he thought might amuse a few strangers. "Until one of my videos blew up overnight. It got more than a million views and I was like, maybe this is more than just a creative outlet."

That video? "It was a joke around getting a tattoo of the word ‘bread’."

Again, it’s really hard to convey the humour of TikToks in words.

Most TikTok videos begin when the maker chooses its signature "sound", selecting a short audio track from the vast library the app offers. In most cases this is a song excerpt, though there are snippets from TV shows and stand-up routines too. The user then shoots a video to accompany the track, inserting their own take on the original.

The audio-first nature of TikTok means that almost every video is a kind of cover version, and a video’s creativity emerges in the way each user delivers their own spin on an established product. You’ll hear the same 15-second snatch of song hundreds of times, but with each iteration a user will respond to all of the previous versions by throwing in a last-second twist, a new punchline or jawdropping physical feat.

This format of creative expression within a formulaic structure extends to dance videos, lipsynchs, comic memes and skits. The TikTok algorithm rewards originality within set constraints – most videos take their cues from a previous dance, joke, trick or stunt and then make it their own.

A sophisticated visual and aural vocabulary has quickly evolved. Comic videos almost always end prematurely, cutting off mid-sentence so the viewer has to finish the gag. Conversely, a moment of absurdity (someone catching a falling bottle with their butt cheeks) will freeze while the moment is repeated from eight increasingly extreme camera angles.

TikTok’s creators might be crafty, but is any of this art? The study of aesthetics has long held to categories such as the beautiful and the sublime, but US cultural theorist Sianne Ngai argues that more relevant categories for understanding art today are the zany, the cute and the interesting. It’s the first of those that helps explain TikTok’s relevance.

"Zany" sounds like a backhanded compliment at best. It conjures something too busy, trying too hard, overreaching itself. If the zany is fun, it’s also stressful, perhaps even fun because it’s stressful. Think manic comedians from Lucille Ball to Jim Carrey, but also the visual too-muchness of Star Wars films today, the 100km/h delivery of Youtube personalities, the streaming series you inhale in one sitting. For Ngai, the zany is the experience of "too many things coming at (you) quickly and at once".

TikTok is undeniably zany. The majority of videos consciously cultivate a naive aesthetic, looking more like the home videos you produced at the age of eight than the glossed and airbrushed imagery on other social platforms. This in part excuses the dorkiness that comes with being zany – TikTok is undeniably dorky, too – because we don’t judge the eight-year-old pretending to be a grown up with the same rigour we’d judge a professional actor.

Ngai says that the zany is a category worth considering seriously because it reflects the experience of modern times. From the silent antics of Charlie Chaplin and Buster Keaton through to the frantic, frenetic busyness of TikTok acts, zany humour collapses the distinction between fun and work, between the demands of everyday life and the supposed escape of privacy. It’s hard to think of a better description of social media than that. With too many things coming at you quickly and at once, a zany response might seem the only reasonable one.

TikTok would rather its users be zany, too. More than any other social platform it sells itself as a low-conflict zone, promoting wholesome content and actively removing material that might provoke divisive responses (how it interprets that is another matter). Where other platforms increase views by ratcheting up the outrage, Tiktok appears almost entirely absent of capital-P politics.

At the level of lived experience, though, TikTok is rife with politics. Many of its memes straddle the faultlines of race, sexuality, gender and other seismically volatile subjects.

They do this with humour. There’s a popular meme that presents a scene with the caption "What I think I look like" before cutting to a variation captioned "What everybody else sees". In one iteration, an African-Australian teen is browsing a Coles aisle in a contemplative fashion. As the soundtrack switches up a notch, "what everybody else sees" is the same man stuffing items from the shelves into his pockets.

But even this is zany, and the slapstick element is joke’s finisher: it’s only on the third or fourth viewing that you notice his hand gets stuck in a box, his keychain snagged on the shelf. It’s a comment about racial stereotyping wrapped up in a clown suit.

The content on TikTok appears to be far more diverse than elsewhere on the internet, though it’s entirely likely the app’s algorithm is controlling that sense of diversity. Users have managed to gather a surprising amount of information as to how that algorithm works.

Melbourne high schooler Harvey Petito has a million and a half followers, but says that follower counts matter far less on TikTok than on other platforms. "The TikTok algorithm sends your videos out to people who aren’t actually following you too. Some week’s I’ll look at my analytics and my content has reached over 20 million people, even though I have 1.4 million followers."

"The best part is that it’s not about followers," says Kirley. "It’s about your originality and your creativity. There are accounts with zero followers and I’m pretty sure, no matter what, the algorithm will still show their video to a very small amount of people. It all depends on how they interact with it."

Kirley is right. In the few hours after uploading, each TikTok video is seen by a few hundred random viewers, which is why you’ll be shown clips with just a few likes sandwiched between those with a million or more. How that small batch of viewers respond to the video is scrutinised by the app – how much of the clip is actually watched, and how many times is it replayed or shared? The rule seems to be that if a video is liked once for every 10 times it’s viewed, it’s then catapulted out to a much larger audience. This is where the AI steps in and begins analysing content: is there hateful or divisive material in there, or anything that breaks the app’s terms of service? If it passes the test, it’s shot out to an even bigger audience.

The next trigger is velocity – a video that increases its likes by 20 per cent in a day will graduate to the next level of promotion, which is why TikTok is specifically geared for sudden viral spikes.

Engagement isn’t based on the followers you already have, which is why first-time posters can rack up the kind of viewing numbers that would be impossible to attain elsewhere.

A relatively popular video will be circulated at this mass level for four days, and if it performs well enough a flesh-and-blood TikTok staffer will review the clip themselves and decide if it should be one of the tiny fraction of videos to go super-viral.

Reach that point and you might find yourself with one or two million followers. TikTokers wear their fame light, though. Harvey Petito is famous enough to be regularly recognised on the street, but he’s more occupied by the same concerns as most other 16-year-olds. "It can be hard finding the time and energy to film when you’ve been at school all day and then had sports after school or something like that, then you come home and have to shower and get dressed to make tik toks when you know you’ve still got homework and stuff to do."

When Kirley’s views went through the roof, things got pretty zany. "When it was all happening I felt it was something I had to do on the daily, to put all my time towards it, but I’ve realised now – and this sounds a bit weird – that it’s not as significant as you might think it is … I’ve gotten to a point where I post what I want to post when I want to post it."