Home » Lifestyle » Thredbo’s Stuart Diver on how to survive a natural disaster, or a pandemic

The names Stuart Diver and Thredbo will forever be linked. That’s history, and you can’t do much about it.

But what takes people by surprise is that 24 years after he emerged as the sole survivor of the landslide that killed 18 people, including his wife Sally, Diver and Thredbo are still bound. He is the resort’s manager, and still calls the place home.

When confronted with tragedy, we have two choices in life, says the 51-year-old former ski instructor turned presenter of new podcast The Elements. “You can put your head in the sand – I could have gone into a room and painted the windows black and just blocked out the rest of the world, or I could have moved to Queensland, which is the same thing.” 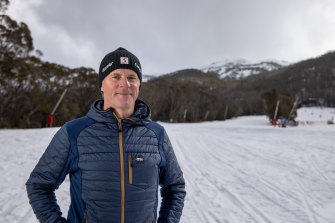 Twenty-four years after being rescued from a landslide on the mountain, Stuart Diver is Thredbo’s resort operations manager.Credit:Thredbo Media

Alternatively, you can stay and confront the wreckage – in his case literal – of the life you had known, and try to rebuild something of substance.

“For me, in those very early days, to have to walk past that landslide site, and to have to stay there, was a really good way of confronting myself and making myself deal with it,” he says. “It caused me a lot of pain, but through that pain I was also in a community that loved me, that supported me and was able to get me through that. And when the wheels fell off, and I wasn’t travelling that well, they were able to point me in the right direction.”

There have been other tragedies since – he lost his second wife, Rosanna, to breast cancer in 2015, again on the mountain – but the lessons he learnt then still guide him. “I think that’s what I do, what I’ve done in my life, is confront that sort of stuff,” he says. “You take it head on, and see how you come out the other end.” 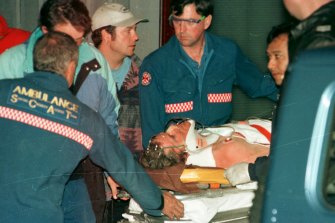 Diver emerges from the rubble on August 2, 1997 after spending 65 hours trapped in freezing cold water while wearing only his underpants.Credit:Mike Bowers

Diver’s philosophy of resilience weaves through The Elements, whose subject matter is natural disasters and the people who come out the other side. Written by Tim Russell and produced by Slade Gibson (who won a Walkley for Teacher’s Pet), each of the four hour-long episodes tackles a separate natural disaster from Australia’s history: Earth (the Newcastle earthquake of 1989), Wind (Cyclone Tracy, which hit Darwin on Christmas Eve 1974), Fire (the 2019 bushfires) and Water (the Sydney to Hobart disaster of the summer of 1998-99, in which five yachts and six lives were lost).

Through interviews and archival records, each of these stories is told through the eyes of the people who were caught up in them. But it’s not about revelling in the grief, insists Russell, it’s about showing there’s a way through it.

“You have to show the darkness in order to see the light,” he says. “But we know we’re telling stories of people’s worst days and we have to be really careful about that and what it can do to their mental health. It’s a balancing act.”

Russell is convinced there’s no one more qualified to walk that highwire than Diver. “To me he is the ultimate survivor – not just in being the sole survivor, but in the way he’s been able to live through tragedy. He’s not just an inspiring figure, he’s really humble and it’s been a mission of his to share a message of resilience.”

Across the four episodes Diver occasionally references his own story. But it’s not exceptional spirit or determination that he identifies as the key to his survival. It’s dumb luck.

“What happened with me in Thredbo was that all the heavy bits just happened to miss me. That doesn’t make me special in any way, shape, or form. It’s just purely physics,” he says. “The media and external people looked at me as being something different but the reality is I’m just the same as everyone else, and if anyone else was put in that situation they’d have had that same opportunity to survive, to live and to come out of it.” 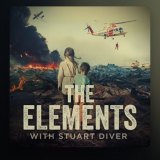 Each of the four episodes of The Elements deals with a separate natural disaster and the people who survived it.

The podcast has only made him more certain than ever that we all have the capacity to rise above enormous challenges, including the pandemic and climate change. And we can do so by coming together.

“In times of tragedy we all pull together behind the people who are suffering or hurting, and I just think, ‘Imagine if we could just harness that, not just in times of tragedy, but in everyday life in Australia’,” he says.

The idea that in the worst of times, you can find the best of us?

“Yeah, that’s right. So why can’t we just do that all the time?”