Almost everyone I know complains that they don’t have enough space in their homes. If they’re not renovating, they are wishing they could. Or planning to move further out of the city so they can afford a bigger house, partly to fit all their stuff.

The ones who can’t or aren’t prepared to move have spent a small fortune at Ikea on so-called “storage solutions”. Some have even called in decluttering experts to help with their problem with stuff. 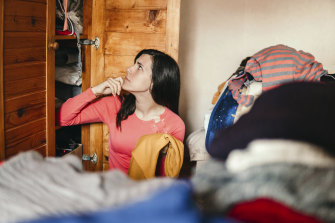 Not enough space? Or too much stuff?Credit:iStock

Interior design expert Kathryn Cullen says it’s not uncommon for clients to claim they need more space, setting up fancy shelving, cupboards and innovative storage solutions. In many cases, however, it doesn’t solve the problem.

“When I go back to these homes a couple of months later there is just as much stuff everywhere as there was before,” says Cullen.

Australian organisation expert Peter Walsh agrees, saying that the first step to dealing with our space issue is to recognise the real underlying problem.

“When people say ‘I need more space’, another way of understanding what they are saying is ‘I have too much stuff’,” says Walsh, who is also known as Oprah’s decluttering guru.

“It’s never about not having enough space. You only have the space you have. Space is fixed and finite. Stuff can expand or reduce to fit into a space,” he says. 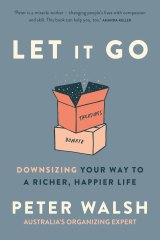 How then do we bring ourselves to reduce our stuff to fit the space that we have? I’m sure I’m not the only one who is a little bruised and sceptical after trying to Marie Kondo my home last year.

There’s a whole category of clutter that did not spark joy and was not necessary in a medical crisis (hello, coronavirus), but I was still unable to part with. Walsh says that this clutter falls into two categories: I-might-need-it-one-day clutter and memory clutter.

The first category is pretty obvious. It’s the old toaster that works perfectly well but was pushed to the back of the cupboard after Aldi had those pretty pink and blue ones on sale, or the old furniture and linen piling up in the garage that your kids might need one day if they ever move out of home.

“These are objects which remind you of an important person or achievement or event in your life. The fear of letting go of these things is that by discarding them you’ll lose the associated memory or, possibly worse still, dishonour the person who gave you the object,” says Walsh who has recently released Let It Go: Downsizing Your Way To A Richer, Happier Life.

While there is nothing wrong with having either types of clutter, having too much of it can make us feel suffocated or buried. It can also waste an awful lot of money.

“I've worked with people who filled a storage unit with the entire contents of grandma's house after she died. Twenty years later, they were still paying rent on that unit, but not once had they looked at the stuff inside,” says Walsh.

If you are serious about decluttering and preventing the clutter from creeping back, Walsh suggests we think of our space like a personal relationship.

“Nobody wants to be in a relationship that isn’t based on mutual love and reciprocal honour and respect, it is exactly the same with your space,” he says.

So the next time you resent your home for not meeting your space needs, think about whether space is actually the solution.

Let It Go: Downsizing your way to a richer, happier life by Peter Walsh is out now. (Penguin Random House).