Remarkably, New York Times bestselling novelist Hanya Yanagihara’s parents have never read her books. The author of Booker Prize-nominated A Little Life and, more recently, To Paradise, is nonplussed about the fact, although she acknowledges it’s unusual.

“It’s very strange because they are readers, it’s not like they don’t read novels, but they just haven’t read them. They said they’re very busy,” she adds, laughing heartily. 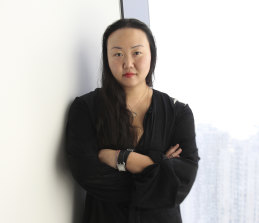 Hanya Yanagihara: “As a writer, when you finish the book, I think you should end up with a lot more questions.″⁣Credit:Jenny Westerhoff

Her folks always encouraged her to write although she thinks they would have preferred she was a visual artist, possibly because they are both artists themselves. “They make a lot with their hands, they craft stuff.”

In her experience, most writers’ parents are either very encouraging or very discouraging. “They taught me it was something I had a right to as much as anyone else, I didn’t have to learn that. Unlike a lot of people, especially a lot of women or people of colour, it wasn’t a revelation I had to come to later in life,” she says.

The New York-based 47-year-old, who returns to Australia this month for appearances in Melbourne and Sydney, is constantly inspired by visual artists, how they think and what they’re trying to say. It’s often exactly what novelists are trying to express, she says: what it is to be human in the world and what our obligations are. “Visual artists just do it in a very different way.”

To Paradise is three stories within a single volume.Credit:

She counts herself lucky that she interacts with them all the time in her day job, as editor-in-chief of T, the New York Times style magazine. Apart from practical considerations (ie health insurance), she believes it is critical as a writer to be out in the world. “Simply getting to be in a place where you’re observing people all day, even if you’re not using any of it directly, but watching their patterns of speech and their movements and concerns, is useful; it’s useful in ways that you don’t necessarily immediately identify.”

Yanagihara’s latest novel, To Paradise, explores how we live our lives and what it means to live a good one. Three stories about different characters with the same names, possibly different generations of the same families, in different eras and vastly different realities, make up the book, set in 1893, 1993 and 2093.

It is hugely ambitious, exploring family – biological and adopted – love, desire and relationships, all the while investigating colonialism and nationalism, totalitarianism, disease and pandemics and climate change.

If A Little Life is “the great gay novel” as The Atlantic said in 2015, To Paradise could well be the great American novel. What unites the three sections, according to its author, is the fundamental question: what is America? Yanagihara argues that that aspect of the book is even more predictive than the idea of the pandemic. It’s an ongoing conversation in the United States – as in Australia – but she says it’s more intense and broad-ranging than ever today. The themes in the trilogy within the book are like echoes, according to the author, a reflection that certain ideas transgress time – and that history does repeat.

For her, writing is about exploring unknowns. “When you’re beginning a book you’re asking a number of questions. The book is not meant to answer those questions but to articulate them. As a writer, when you finish the book I think you should end up with a lot more questions. ” If not, you haven’t been bold enough, she says.

Choice and agency in relation to the individual, the family and the state is a significant thread in her books. The idea that we choose to be happy is a recent concept, an arrogance of the 21st century – and it drives Yanagihara mad. “This fiction that you can write your own fate and your own future, that is not true for a lot of people,” she says. “Or that you choose to be unhappy – that anyone would choose this, it’s such a miserable thing to say.”

Certain ideas across the body of her books [her first, The People of the Trees, was released in 2013] are revelatory to her while others are not surprising.

“By the end of the third book you realise there may be fixations or interests that you have that you weren’t aware of, and also tics that you have, and questions that you are clearly trying to answer,” she says. “Some of them are so varied you can’t really identify them until someone identifies them for you.”

There are no mothers in her books, few significant females in fact. Grandfathers or older male mentors are front and centre. There’s always someone fighting against their name, “this idea that your name or the name that someone chooses to give you it’s a thing that somehow changes your fate”. There’s always disease and a body falling apart.

“This fiction that you can write your own fate and your own future, that is not true for a lot of people.”

The characters Yanagihara creates, such as the traumatised Jude in A Little Life, are challenging, sometimes infuriating. “They are very passive and they don’t have a lot of imagination – the same is true of Jude – who have had imagination beaten out them, quite literally, so they have had to not rely on imagination because to do so would be dangerous. The reader is often frustrated because things seem to happen to him a lot of the time.”

I ask if she intends to write tough, challenging books. The short answer is no. One of the things a novel can do, she says, is to map an interior emotional life. Readers see emotions or thoughts they’ve experienced and felt isolated by, identified by someone else.

“It doesn’t mean it makes you feel less lonely or less miserable or less anything – and nor is that the point of fiction – but it is something that the medium can do.”

Even though Yanagihara started it in 2018 and was nearly finished when COVID hit in March 2020, To Paradise has a recurring theme of pandemics. In the first part of the book, key characters have lost parents to “the sickness”, an unnamed disease spread by a flea, the second alludes to a condition that sounds very much like AIDS, and in the third, pandemics have become part of life, with characters bearing scars to show they survived the previous wave. As part of her research, Yanagihara spoke with a senior epidemiologist and virologist, who was interested in not only the history of disease but the art surrounding it.

“It was very reassuring to know that in the midst of all these terrible illnesses, the Justinian plague, the Black Death – which killed half of the European population – society and civilisation did keep trudging onwards.”

In the book, she envisages an America not founded on Puritanism, which she quips would have meant a whole lot more joy. “Certain things were immediately going to change. The idea of what love was, what gender was, would immediately be different,” she says.

Many authors in the past decade have played with perspective, imagining and articulating minority voices. “If history hasn’t recorded women’s voice or gay voices, does it mean that they haven’t existed?” she asks. “There has been a large-scale effort by historians and artists as well to try to recalibrate that history and to try to people it with personalities and voices who probably existed, even if they didn’t name themselves as we would name them now.”

Yanagihara takes it a step further, beyond imagining one perspective to create an alternative reality. The first section of To Paradise imagines a New York in the 1890s known as the Free States. It is a world in which same-sex relationships are commonplace, there is no word for “gay”. Even so, shockingly – despite its utopian name – it is a land in which people of colour are not welcome.

A key thread of the novel is colonialism, particularly overt in the second section, which is set in Hawaii where Yanagihara spent part of her childhood and teenage years, and where her father was born. “Part of growing up Asian in Hawaii, where we are the dominant group [is]… you realise that you too are an interloper. Just because your ancestors arrived to work the fields and not in power necessarily, you still are,” she says. “I think the moment that you realise that as an Asian person in Hawaii is quite unsettling, you don’t quite know how to resolve that – I don’t know how to resolve that.”

She and her parents, along with many like them in Hawaii, believe Indigenous Hawaiians deserve a nation within a nation or a state within a state.

“They are a people that had a great deal taken from them and they deserve some kind of recognition and land and wealth from that. I don’t know whether it will ever happen but I think if you are an aware person in the islands you cannot help but be aware of what was taken from the Hawaiian people and what they are owed.”

In her conversation I hear echoes about the treatment of Indigenous Australians, their resilience in the face of generational trauma and abuse, and the long road to reconciliation in this country. Remarkably, she says, in Hawaii they have managed to bring the language back in just two generations. Given there are multiple Aboriginal languages, it’s not as straightforward here, but the principle is inspiring. “It proves it is possible, as long as you have long-term funding and long-term dedication, you can do it. I am being reductive here, but it is possible.”

Read this: Hanya Yanagihara’s recommendations for young and old