The spaceship has finally landed; we’ve arrived at “Planet Her.” To say that Doja Cat has had a astronomical rise in the past few years would be an understatement; within two and a half years, Doja went from posting joke songs about cows and milkshakes on the internet to snagging three Grammy noms and wearing Cavalli on the red carpet. Even if the pandemic hit at a time when her career was finally taking off after years of toil, she didn’t let that get her down. “I was just like, ‘If the world’s going through it right now, I don’t want to add to that by freaking out over my tour,'” she told Billboard in April. “It’s a big deal, but it’s not as big of a deal as getting everybody healthy and getting the world back to not such a f**ky place. I’ll put down my tools for that.”

So she waited, and we waited. A year later, restrictions in the U.S. are beginning to lift, and Doja is ready to give us new music, and she’s more confident than ever. For the track “I Don’t Do Drugs,” Doja teams up with pop princess Ariana Grande for a hell of lesson in denial. The two have teamed up before — first on the “Positions” album-cut “Motive,” and on the remix to “34+35” — but “I Don’t Do Drugs” sees them exploring new territory. Here’s what you should know about this song. 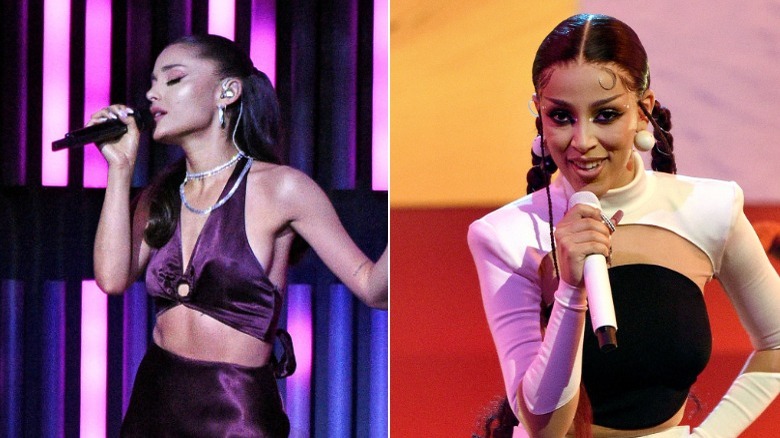 While we would certainly love to hear it, “I Don’t Do Drugs” is not Doja Cat and Ariana Grande’s socially conscious PSA designed for your middle school assembly. What it is is an exploration of a relationship that you know is no good for you, but you can’t help but go back. The track sees Doja and Grande comparing their suitors to drugs; they both really want a fix, but they keep coming back to the refrain, “I don’t do drugs.”

Based on the rest of the song, though, it kind of seems like they do do drugs, actually. “Got mе on stuck, chasing that rush/Had to give in, couldn’t give up,” they sing over synth bass and twinkling percussion on the chorus. Doja in particular can’t stay away, warning, “Ever since I fell in love, not quite like being trapped/I don’t like a sickness that, keeps me addicted bad.” Grande, meanwhile, jokes in a trap cadence that her boo has “Got me purrin’ like I’m Doja Cat,” saying, “My body won’t let me hide it.” Even if the song isn’t actually about drugs, the lesson they taught in school still applies to lousy romantic partners: just say no!