Home » Lifestyle » The power crazed crook in the Kremlin

The power crazed crook in the Kremlin: The Oligarchs thought he’d last one term… until he brought them ruthlessly to heel. Now Putin has the West in his sights

BOOK OF THE WEEK

Thank heavens for coronavirus! I know I shouldn’t say that but there are some small blessings in the current pandemic.

In Russia, the national referendum to extend Vladimir Putin’s stay in office for another 12 years has been postponed.

The proposal that he continue for two more six-year terms after his present stint ends in 2024 was due to be put to the people next Wednesday. But thanks to Covid-19 the vote has been deferred.

Given his vice-like grip on the levers of power of that vast country and the muted opposition to him, there can be little doubt which way it would have gone. He would effectively have been endorsed as president for life.

But now there is a pause — if a brief one — in his relentless march to unchallenged, autocratic supremacy. 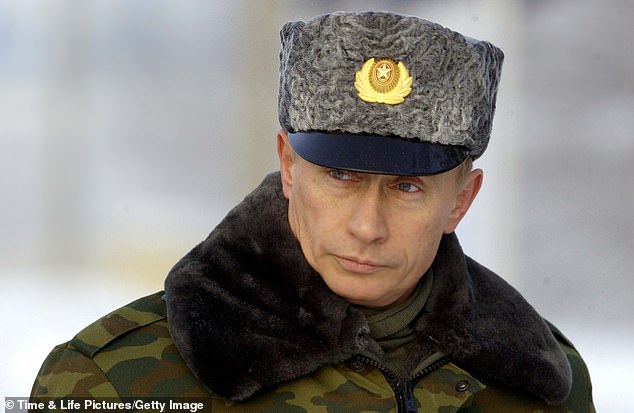 That even tough guy Vlad — ‘The Papa’ or ‘The Number One’ as his cronies call him — has to bow to the virus is almost a relief.

Because in the 20 years since he grabbed the presidency, no one at home has managed to stand in his way without being rolled over, removed, imprisoned, killed, cowed or bribed into submission.

At the same time, he has turned a clapped-out post-communist nation going nowhere into an aggressive and much feared international power.

Putin’s Russia now has its insidious fingers in every political, diplomatic, military and financial pie around the world — with deeply worrying implications for all of us.

How this man seemingly from nowhere managed his Napoleonic rise from mere deputy mayor of St Petersburg to absolute power is arguably the biggest story of the 21st century so far.

In forensically unravelling it, journalist Catherine Belton, former Moscow correspondent of the Financial Times, has done a great service, producing a book that western experts on modern Russia acknowledge as vital to our understanding of the Putin phenomenon.

Her thesis is chilling indeed. When the Soviet Union disintegrated in 1991 and communism gave way to a makeshift form of democracy, the KGB, Moscow’s underground army of spies, crooks and secret policemen, disappeared from the radar. 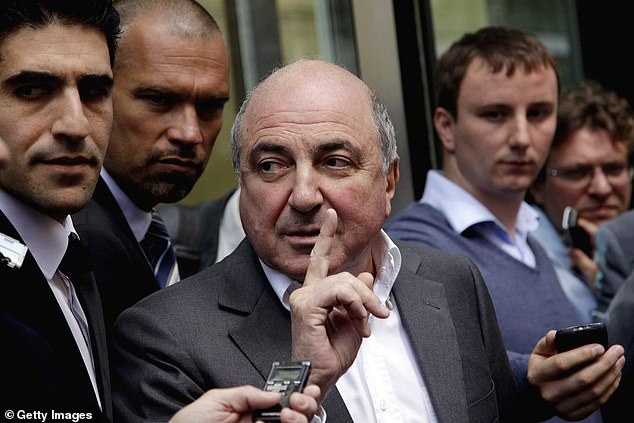 But they hadn’t gone for good, tails between their legs. They weren’t defeated, only biding their time.

Their moment came when the oligarchs, who in effect ran Russia after making vast fortunes from oil, gas and mineral rights amid the economic and political chaos of the Yeltsin years, catapulted the seemingly pliable Putin into the presidency.

They promoted him as their man to sort the country out and bring it to some semblance of liberal democracy. They didn’t expect him to last more than one four-year term. 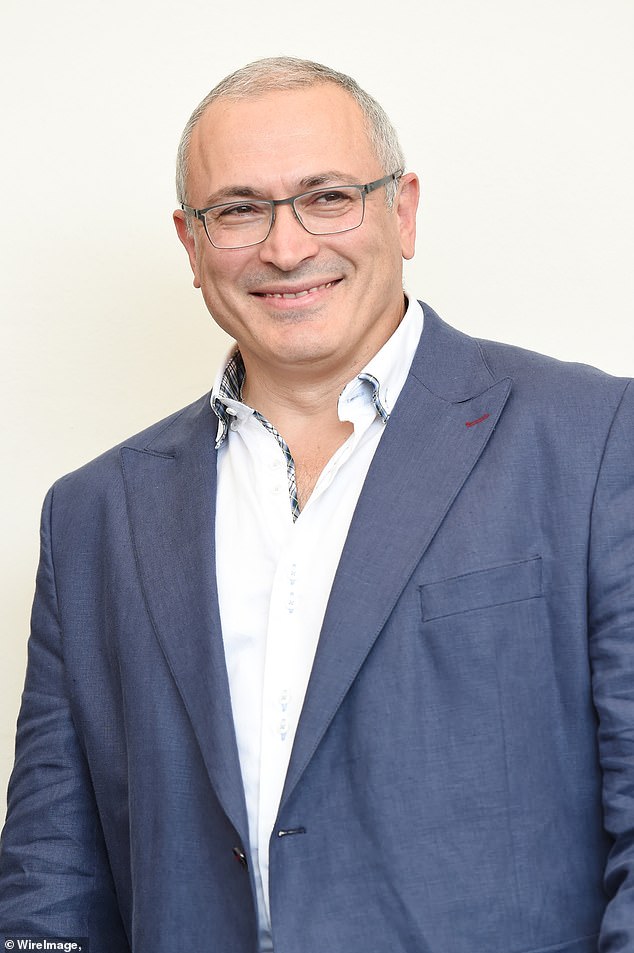 Russia’s richest man, oil tycoon Mikhail Khodorkovsky (pictured), said to be worth £12 billion, was boarding his private jet in Siberia when commandos arrested him

What they didn’t reckon on was that Putin was KGB to the core. He’d cut his teeth spying on the West in the old communist days, subverting Western businessmen, stealing industrial secrets, smuggling. And it was with his old pals that his true allegiance lay.

With Putin in the driving seat, Belton argues, the KGB was back in control of Russia and its grip on the country is as strong now as it ever was in Soviet days.

His agenda — eagerly taken up by the so-called siloviki (the word means ‘strongmen’) he recruited from the old ranks — was to make the nation all-powerful again, a top-down, state-run force not to be trifled with at home or abroad. 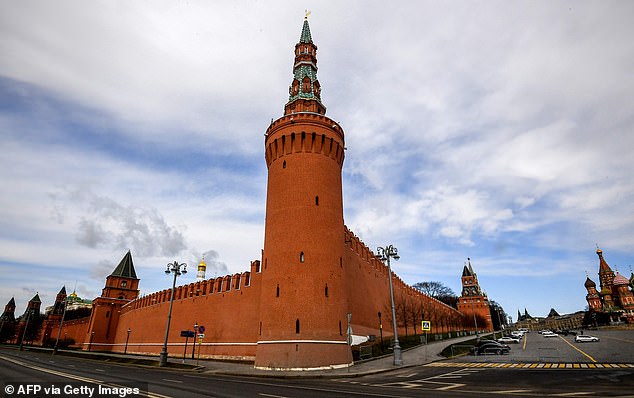 With Putin in the driving seat, Belton argues, the KGB was back in control of Russia and its grip on the country is as strong now as it ever was in Soviet days. Pictured, the Kremlin

Along the way they would feather their own nests, through money-laundering, bribery, fraud, rake-offs, slush funds and theft. Putin’s Russia would become not just an autocracy but a kleptocracy.

He turned the tables on the oligarchs who’d sponsored him, strong-arming them into acquiescence. They worked for him now, not the other way round.

What emerged, writes Belton, was ‘a system in which all businesses of any scale were dependent on the Kremlin. Tycoons had to serve the state in order to preserve their standing and wealth’.

Those who resisted found the police knocking on their doors with arrest warrants for tax evasion or fraud or some other crime. Backed by the state, he had them at his mercy.

Some ran — like media magnate Boris Berezovsky, only to end up dying mysteriously in England.

Some went to jail — Russia’s richest man, oil tycoon Mikhail Khodorkovsky, said to be worth £12 billion, was boarding his private jet in Siberia when commandos arrested him.

Most caved in and did as they were told — Roman Abramovich, says Belton, bought Chelsea FC on Putin’s instructions, as a way of enhancing Russian prestige in the West.

Even those closest to him weren’t safe, especially if they got too big for their boots. Sergei Pugachev made billions as Putin’s favourite banker before ‘Papa’ turned on him and looted his vast assets.

In exile, Moscow mafia thugs turned up, took him out to a yacht in the Mediterranean and demanded £280 million to guarantee the ‘safety’ of his family.

Belton draws on published sources and deep-throat contacts to plot a course through the maze of crooked financial manoeuvres — the sleights of hand, the back-room deals, the ‘loans’ from state banks, the kick-backs on contracts — that Putin and his courtiers got up to as they systematically drew the wealth to themselves as inexorably as iron filings to a magnet.

They stashed their ill-gotten gains overseas, their so-called ‘black cash’ amounting to a staggering £640 billion in all, according to one estimate, while at home they flaunted their riches, kitting themselves out with yachts and private planes and vast palaces. One of these had a garage for 15 cars and a storeroom for fur coats.

All the while, human rights, freedom and the rule of law went increasingly by the board. Local governors were stripped of their authority. Dissent was suppressed. The courts acted as an arm of the Kremlin. Judges toed the line.

Though Russia was ostensibly a democracy, the reality was that power emanated from the top down, with Putin as a feudal monarch, a tyrant, a tsar like Peter the Great, surrounded by his henchmen, his boyars, who owed their fealty and their vast riches to him.

Belton finds it shameful that the West — which had worked for and then welcomed the demise of communist rule in Russia — connived in this return to autocracy.

Bankers and brokers in London, in particular, fell over themselves to get a slice of the financial action, happy to look the other way as fortunes were hidden in offshore havens.

Peers of the realm lined up to lend their apparent respectability to the boardrooms of Russian ventures. 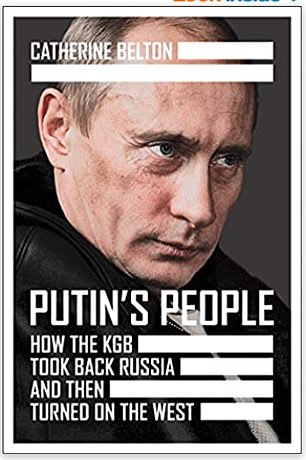 Russian money swirling around London earned the capital the nickname of ‘Londongrad’ or Moskva-na-Thames, Moscow-on-Thames.

In the U.S., Donald Trump, before he became president, did deals with the Russians to bail out and expand his property empire.

Greed triumphed over principle, with the result that the West, by slavishly following its own money-making instincts, has allowed itself to be infiltrated.

Belton warns: ‘The weakness of the Western capitalist system, in which money ultimately outweighs all other considerations, has left it wide open for the Kremlin to manipulate.’

Making matters worse is that the siloviki were on a mission, not just to get very rich, but to use that wealth to undermine the West.

Under communism, the KGB had seen the West as its enemy. Its successors, led by Putin, feel the same way.

Under him, Russia, once a busted flush on the world stage, has become the world’s power broker again, whether openly, as in Ukraine and the Middle East, or covertly.

In its new guise, the KGB has adopted the tricks of the old KGB, causing disruption in the West wherever it can.

Its money backs political extremists, Right or Left — the cause isn’t important, only the confusion they cause.

It gets up to all sorts of mischief to drive a wedge between the U.S. and Europe. It encourages unrest and dissension just to stir the pot.

In the eyes of Putin and his cronies, the Cold War has never ended, just moved into a new phase. We have been warned.