After four lost pregnancies, each heart-soaring little kick feels like a wonder: Following agonising years of miscarriages, the shatteringly poignant story of a mother-to-be torn between hope and fear

Here is a sentence I almost daren’t write: in less than three months’ time, I will have a baby.

My official due date is no longer a vague point on a hazy horizon but is galloping into sharp focus.

Not that you’d guess as much, were you to ask me or my husband how the preparations are going.

We have not decorated the nursery yet, nor so much as looked at a pram. I have not made a birth plan or decided when my maternity leave will start. We’ve not even discussed names. 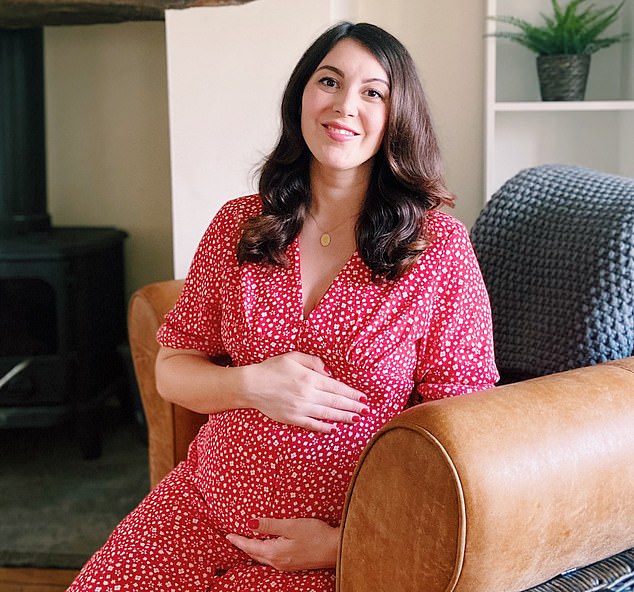 None of this is by accident. We are not one of those charmingly disorganised, go-with-the-flow sort of couples.

Nor have we been caught off guard by a happy ‘surprise’. This pregnancy is something we have hoped for — longed for — for four years.

No, what we are is scared. Scared that this pregnancy — my fifth, after four miscarriages — will also end without a baby in our arms.

We are all too aware that a fully tricked-out nursery could still go unused, haunted by the image of an empty Moses basket, deeply afraid of enacting our own version of the famous six-word story, sometimes attributed to Ernest Hemingway, ‘For sale: Baby shoes, never worn’.

For this reason, we waited until we’d passed 24 weeks before buying even a single Babygro. 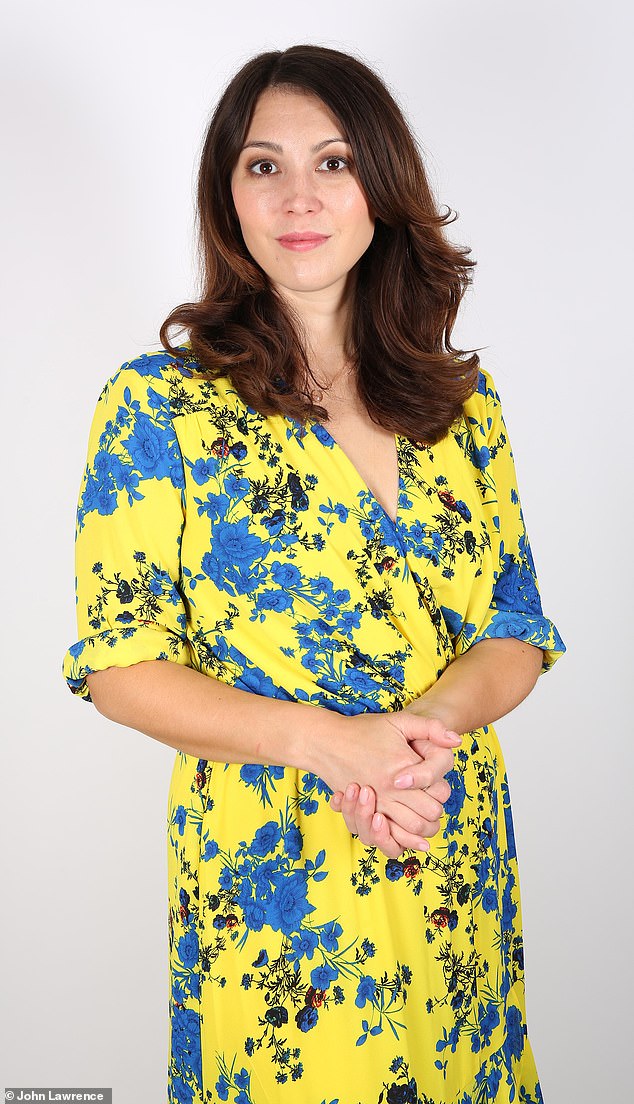 Jenny has previously gone through four miscarriages, all before the 12-week mark, and she’s worried something could go wrong with her pregnancy. Pictured, last June

Despite our fears, we wanted to mark this milestone, one we’d never reached before and which felt especially momentous, as 24 weeks is widely considered to be the point after which a baby stands a fighting chance of surviving outside the womb.

So, Dan and I allowed ourselves 20 minutes in John Lewis (pre-lockdown) in blissful, suspended reality.

We pretended we were like any other expectant couple, all innocent, excited smiles when the till assistant asked when I was due.

‘A summer baby — how lovely!’ she said, and we beamed.

Back at home though, our prize —an implausibly tiny, white cotton sleepsuit, embroidered with bunny rabbits — was swiftly consigned to a box upstairs, packed neatly away in tissue paper, along with our fragile hopes. Out of sight, out of mind.

Perhaps, to an outsider, this all sounds unduly pessimistic. Surely we can see that things are different this time? Surely we can relax a little, now we’re so much further along?

On Saturday I officially made it into the third and final trimester — the home stretch (no pun intended). By comparison, all of our previous pregnancies ended before 12 weeks.

But if recurrent miscarriage teaches you anything, it’s that there are no guarantees. 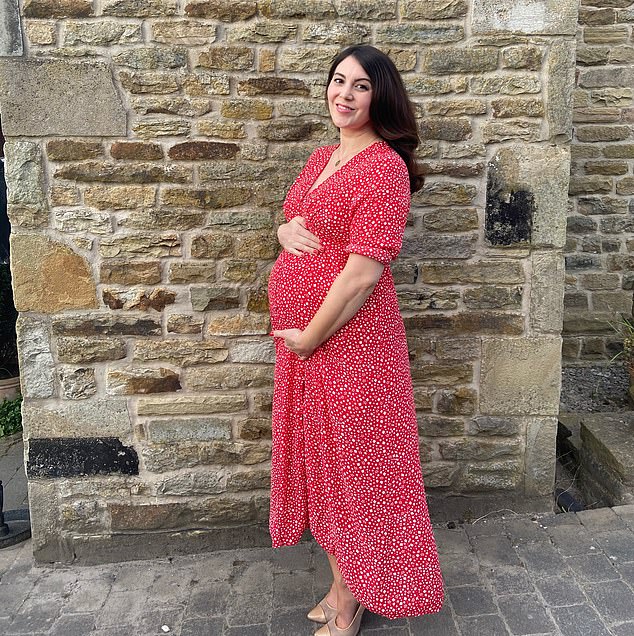 After some early bleeding in our first pregnancy, more than three years ago, we went to a scan and were shown a flickering but insistent six-week heartbeat.

‘That’s a really good sign,’ the midwife said. ‘The chance of miscarriage goes right down once we’ve seen the heartbeat.’ And so we let ourselves be reassured — only to lose the pregnancy six weeks later, in a rush of blood and panic on a ward in A&E.

Afterwards, we were told that although miscarriage is common, it was unlikely it would happen a second time. Or a third.

After the third, and tests that concluded there was no medical reason for my body’s inability to hang on to a pregnancy, the consultant we saw cajoled us by saying the odds of a healthy baby next time were still very much in our favour, if we would only keep trying …

But after we struck fourth time unlucky, six months later, it was hard to know who or what to believe.

Even now, after multiple scans showing all is well (we’ve had six already, where most people would have had two) and two perfect ultrasound images pinned above my desk to prove it, not to mention the burgeoning bump, it is hard to feel truly reassured when you’ve had so much false reassurance in the past.

Being braced for disappointment becomes a habit. What was once dread that we’d fail to get out of the starting blocks has mutated into fear that we will fall at the final hurdle. (And that was before a global pandemic was added to the mix.)

I am conscious our approach to this pregnancy can’t be easy for our friends and family.

We still find it hard to talk in any great detail about our plans for ‘when the baby comes’ — words we never use ourselves. It is always ‘if all goes to plan’, or ‘all being well’, or, vaguely, ‘after July’.

Relatives will say: ‘I know we’re not allowed to get excited yet’ or ‘are we allowed to say congratulations?’.

My mum knows to double-check before she texts me pictures of the things she’s been knitting and sewing for us (and, even then, she was under strict instructions to wait until after 20 weeks — the halfway point).

I do sometimes worry about being such a killjoy — that it comes across as churlish, even.

Yet I also know we can’t be alone in feeling and behaving this way. After all, there are so many potential hurdles that can steal away some of the joy and innocence of having a baby.

As many as one in five pregnancies ends in miscarriage; one in every 90 pregnancies is ectopic (in which a fertilised egg implants outside of the womb, where it cannot survive); and one in 250 babies will be stillborn.

That’s a lot of people who may be embarking on their next pregnancy in the shadow of grief and fear.

Then there’s the one in seven couples who struggle to conceive, potentially enduring the intimate torture of failed IVF cycles before they get a positive pregnancy test.

For others, pregnancy might be clouded by a diagnosis of pre-eclampsia or gestational diabetes — or news their baby is unwell and could need serious medical treatment soon after birth.

Whatever the root of it, anxiety affects half of all pregnant women, according to a 2017 survey conducted by the Royal College of Obstetricians and Gynaecologists.

Yet this isn’t a side of the pregnancy story we hear very often. Instead, the ‘cute’ internet pregnancy announcements, Pinterest-perfect baby showers and gender reveal parties hog the spotlight.

Chirpy advice and breathless daily updates can be beamed to your smartphone via pregnancy apps that seem built around a naive surety that two pink lines on a pregnancy test always adds up to a baby in a few months’ time.

This is not to say, of course, that just because pregnancy isn’t always fun for some of us, there should be no fun for anyone. But it can start to feel alien and alienating in a pregnancy like ours.

Ditto pregnancy books that talk about ‘empowering’ birth choices and making sure you get the blissful, midwife-led waterbirth you’ve meticulously planned, down to the last soothing whale sound.

Don’t get me wrong, it is a woman’s right to give birth how she wants. But I absolutely cannot relate to this. However hard I try, having birth ‘preferences’ feels too much like pushing my luck.

I feel cut out of the normal pregnancy script. The expected lines feel uncomfortable and false in my mouth.

‘Is this your first pregnancy?’ is a question I’ve been asked countless times, by everyone from hospital receptionists to yoga instructors, and I still don’t know how to answer it: at least, not elegantly.

Generally, I look at my shoes and nod dumbly. No need to fill in the gory details for relative strangers.

It’s trickier still with fellow pregnant women; women you hope might become friends, if you end up with babies of a similar age.

An obstetric history like ours is not easy to bring up in a chat. At what point do you explain yourself? Is it ever fair to burden other pregnant women with this knowledge?

And if you do, do you risk making yourself the ghost at the feast for evermore? The subject of playdate whispers: She’s the one who had all those miscarriages.

No. Somehow it feels safer not to say anything. Even if it would help explain why I’m so neurotic about some things — decaf coffee, properly cooked meat, not dyeing my hair — yet apparently relaxed about anything that involves planning, such as buying a cot or a car seat, or breastfeeding classes.

Even so, keeping quiet comes with a side-helping of guilt. In recent years, I’ve connected with many other women grappling with the invisible grief of miscarriage, infertility, stillbirth, neonatal death or termination for medical reasons, through writing about my experiences and sharing other people’s stories via my blog (uterus monologues.com).

It’s a close-knit and fierce community, forged by a shared conviction that there is not nearly enough knowledge of, or openness around, these subjects.

So my own tactical silences now can feel a little like hypocrisy. And I’ve often wondered, when chatting to other pregnant women, whether they, too, could be harbouring a story not unlike ours. This is how taboos fester.

None of which is to say there aren’t upsides to a pregnancy like mine. Even amid the angst, trepidation, and, yes, sometimes terror that something could still go wrong, there is also a delicate thread of pure, golden joy.

I am insanely, giddily grateful to be pregnant. Watching the needle on the bathroom scale nudge upwards each week feels like a pleasure, not an imposition.

Even morning sickness has been a cause for celebration at times. Although I’ve had roiling nausea in all five of my pregnancies, it was only this time around, in week 13, that I really threw up.

I can’t say I exactly grinned as I hugged the toilet bowl, but I did feel a mad rush of happiness and hope.

Pregnancy isn’t uniformly magical, of course it isn’t. Even I struggle to put a positive spin on the constant reflux I seem to get. But other minor indignities, such as having to remove my wedding and engagement bands as my fingers puff up, have felt like small, triumphant rites of passage.

When things unfold just as the pregnancy manuals promise, for a second you feel normal, and your world feels safe and predictable.

Sometimes I feel I could happily lie awake all night, counting every kick and squirm, mesmerised as the skin of my stomach ripples and dints.

A private, semaphored conversation between me and the brand-new person just below the surface: Hello, hello again, you’re really in there, I know you…

It’s these tiny moments of grace that you have to hold on to, I think. And if I could look back and tell myself anything, it would be this: all those things you have dreamed of for so long, they will feel just as good as you’d hoped and then some.

If anything is going to pull you through the dark, fretful hours, the days that feel as long as a week, the weeks as long as a year, expecting to be bleeding every time you go to the bathroom, holding your breath for bad news at every scan and blood test, it’s the promise of these moments.

This is also what I would tell anyone who is where I was nearly two years ago, reeling from yet another loss, another disappointment, and feeling like you can’t put yourself through it again.

Finally holding that scan picture in your hand, the hug of maternity jeans elastic around your waist, the first kicks … they don’t make it easy, but it does start to feel like it might just be worth it after all.