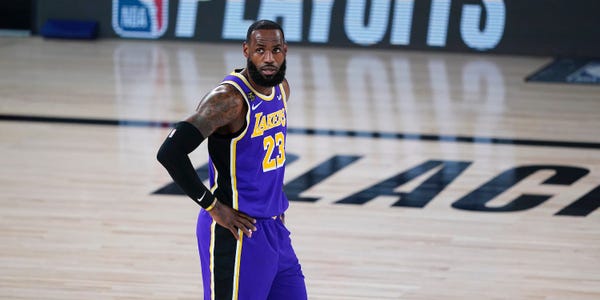 The NBA season is on the brink of ending early after a meeting on Wednesday involving players, coaches, and referees that David Aldridge of The Athletic descibed as ending "ugly."

The remaining teams in the Disney World bubble held a meeting after all six NBA teams scheduled to play on Wednesday boycotted games to protest the police killing of Jacob Blake in Kenosha, Wisconsin. The boycotts began when the Milwaukee Bucks did not take the floor for Game 5 of their first-round series against the Orlando Magic.

ESPN's Adrian Wojnarowski described the vote as "more of a polling" than a final vote, and that there hasn't been a final decision.

Charania reported that the other remaining teams voted to continue playing.

During the meeting, Chris Mannix of Sports Illustrated reported that players felt sitting out one game was "meaningless." Additionally, players, including James, demanded to see action from owners, and that if action couldn't be agreed upon, the season might be over, according to Mannix.

Wojnarowski reported that meetings will likely to continue into Thursday, though the three playoff games scheduled on Thursday will likely be postponed.