Home » Lifestyle » The lonely fate of a gay best friend

When you are single and your friends are your family, what happens when those friends settle down and make families of their own?

In Significant Other, Jordan (Tom Rodgers) is facing a lonely future as his close-knit group of friends, all straight women, find partners and marry. Straight and gay dating often operates on different timelines, and Jordan, who is gay, isn’t on the same track to lifetime commitment as Vanessa (Dominique Purdue), Laura (Laura McInnes) and Kiki (Isabella Williams); he’s currently hopelessly infatuated with Will (Matthew McDonald), a handsome and straight co-worker who does not return that interest. 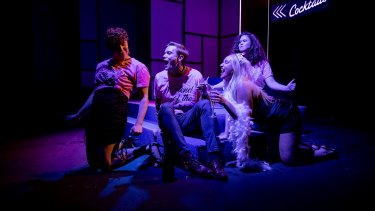 Significant Other asks questions about the differences between gay and straight dating.Credit:Bob Seary

In a world full of happy couples, and in the face of well-meaning but facile advice from his grandmother (Helen Tonkin) that doesn’t account for the complexity of the queer experience, Jordan can’t keep up the façade of a supportive best friend much longer.

Significant Other, by Joshua Harmon, is a spiky dark comedy about our worst anxieties; it delights in vocalising all those embarrassing, too-vulnerable thoughts we keep to ourselves. While the dialogue occasionally tries too hard to sound clever and cool, when Harmon trusts himself the laughs flow easily and the heart holds true.

Hayden Tonazzi directs a confident production that knows its characters and concerns well; his steady hand at the play’s centre makes space for bravely funny performances. While a few scenes lose steam, there’s a lot in this production to perk the play back to life – there’s some clever use of theatrical blocking and stage space to make a joke even funnier. Hamish Elliott’s set is attractively adaptable; it’s playfully lit by Morgan Moroney to create brand new atmospheres: office buildings, clubs, wedding venues.

This is a playful company, and while the accent work is wildly inconsistent, the character work is not. Jordan is the soul of the piece, and Rodgers brings him to wry and wistful life; Matthew McDonald makes the most of playing Will – and all the other male roles – with a twinkle in his eye that serves as gentle commentary on modern hetero-masculinity; Purdue, McInnes and Williams play Jordan’s friends with smart and subtle nuances.

It’s refreshing to see a play that feels in conversation with a contemporary experience of growing older alone; it’s wonderful to laugh often and freely and still feel involved in the story. This one’s a charmer.