Home » Lifestyle » The best moments of the Tokyo Olympics, in pictures

With the world still in the grips of the COVID-19 pandemic and the impact of its Delta variant, in some respects these Olympics came at exactly the right time, albeit a year later than scheduled.
Tokyo in 2021 will be remembered for generations. Its stories of triumph, heartbreak and tragedy have truly had us gripped, on the edge of our seats.

The duel in the pool – Titmus versus Ledecky

Ariarne Titmus overtook Katie Ledecky in the last 100 metres of the women’s 400m freestyle final to take gold from the American legend. It was a swim for the ages, and a swim for the moment. Titmus won gold in both the 200m and 400m, while Ledecky won the 800m and 1500m individual freestyle events. 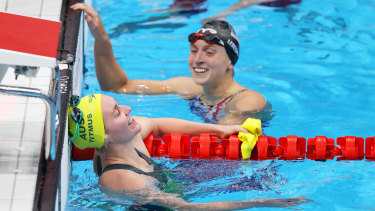 Ariarane Titmus and Katie Ledecky after their duel in the 400-metre freestyle.Credit:Getty Images 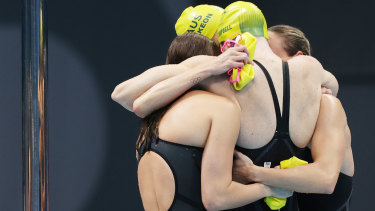 After coming so close in Rio and London, Jess Fox broke through for her maiden Olympic gold in the C1 canoe slalom final in Tokyo. 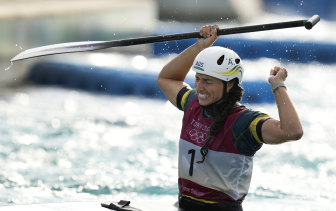 Isaiah Jewett of the US and Nijel Amos of Botswana both fell in the final 200 metres of their men’s 800m semi-final and helped each other up. 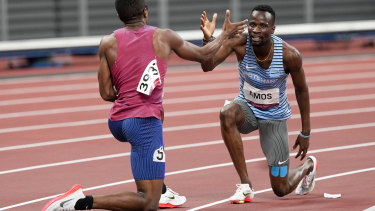 Isaiah Jewett and Nigel Amos help each other up after falling in their 800m semi-final.Credit:AP

Great friends, Qatar’s Mutaz Barshim and Italy’s Gianmarco Tamberi shared high jump gold in the feel-good moment that may well define the Tokyo Games for many. But it also posed the question – should rival athletes be able to choose to share gold? 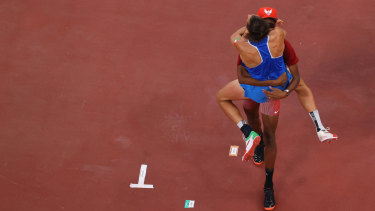 Gianmarco Tamberi of Italy and Mutaz Essa Barshim of Qatar react after both winning the gold medal in the men’s high jump.Credit:Getting Images

Norway’s Karsten Warholm broke his own 400m hurdles world record in astonishing scenes and became the first man to run under 46 seconds. Silver medallist, American Rai Benjamin, also broke Warholm’s old record. But was it all down to the new shoes? The controversial new spring-heeled spikes have received plenty of attention throughout the Games. 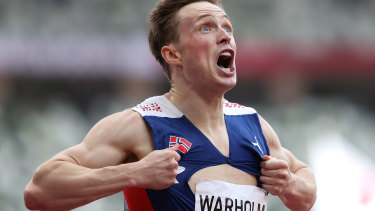 Rayssa Leal (13-years-old from Brazil), and Momiji Nishiya and Funa Nakayama (13 and 16, Japan) stood atop the podium in the women’s street skateboarding event in its Olympic Games debut. 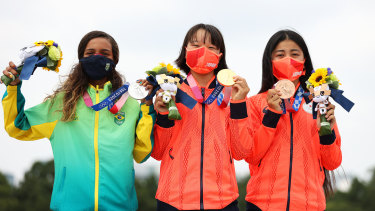 Rayssa Leal of Brazil and Momiji Nishiya and Funa Nakayama of Japan pose with their medals during the women’s street final medal ceremony.Credit:Getty Images.

The world in the palm(er) of his hands

Australia’s 17th gold medal of these Games – equal with our best haul since the modern Olympics began – was won by 18-year-old Keegan Palmer, an Aussie-American skateboarder with a style as smooth as a Shinkansen train. 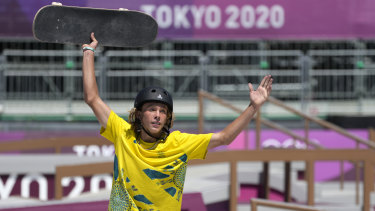 Weightlifter Hidilyn Diaz made history by winning the Philippines’ first ever Olympic gold medal in any sport after taking out the women’s 55kg title. 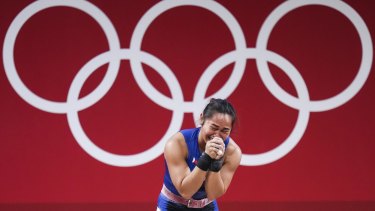 Hidilyn Diaz of the Philippines.Credit:Getty Images

Japan’s players were euphoric following their 2-0 victory over the United States in the gold medal softball game. 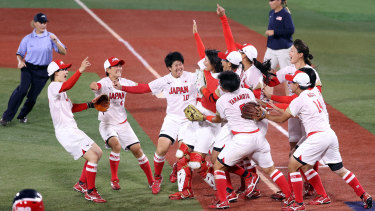 Yukiko Ueno is swarmed by teammates after the final out to defeat the US 2-0 in the softball gold medal game in Yokohama.Credit:Getty Images

The ecstasy … and the agony

Dutch cyclist Annemiek van Vleuten crossed the line in the women’s road race and celebrated with both arms in the air as if she had won gold. The only problem was that her rival, Austrian Anna Kiesenhofer, had crossed the line one minute and 15 seconds earlier, which van Vleuten didn’t realise. 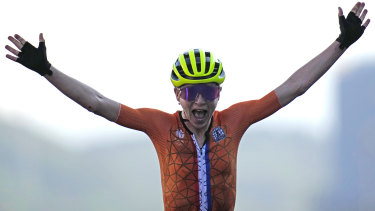 The moment it all came undone

It all came undone for Australia in the men’s team pursuit at the velodrome when the handlebars inexplicably snapped off Alex Porter’s bike. 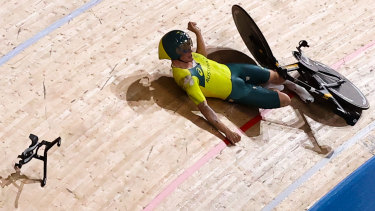 Sudanese-Australian Peter Bol won hearts across Australia as he became the first Australian to reach the men’s 800m final in more than 50 years. He finished fourth, and won a legion of fans in the process. Bol admitted that whether he won or lost, he was glad he went all-out for the win and even though he missed out on gold, he achieved his goal of inspiring the nation. 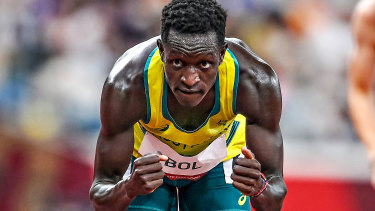 Peter Bol bolted into the final of the 800m.Credit:Getty Images

Hoy proves age is no hurdle

Riding in a staggering eighth Olympic Games, 62-year-old Andrew Hoy became Australia’s oldest ever male Olympian. And he proved what he was still capable of – winning a bronze in the eventing individual jumping final on day 10 in Tokyo. 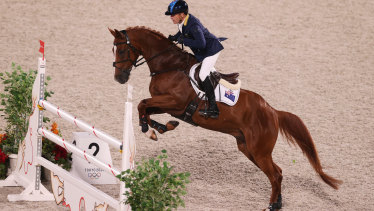 The world’s fastest man from the most unlikely of places

Though Australian Rohan Browning had the athletics world talking after making the semi-finals of the men’s 100m, it was little-known Italian Lamont Jacobs who put the world on notice. The search to replace the biggest somebody in athletics found instead a nobody. The question of this year’s Olympics was, for the first time in 13 years, not whether anyone could beat Usain Bolt, but who comes after Bolt? Few would have settled on the answer being a 26-year-old long jumper-turned sprinter from Italy by way of El Paso, Texas. 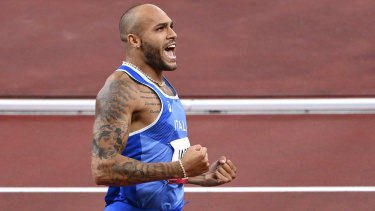 Lamont Jacobs took out the men’s 100m in stunning scenes.Credit:AP

Maloney wins a medal – with the help of a friend

Ash Moloney went where no Australian had gone before, winning bronze in the decathlon, Australia’s first medal of any colour in the event and at the track at these Olympics. When the bell went for the last lap of the last event of 10, Moloney looked like he had nothing left. Before the bell, his mentor and teammate Cedric Dubler, who had paced him in the race, screamed at him to go and sat on his backside to chase him for 100 metres. It turns out decathlon is a team sport after all. 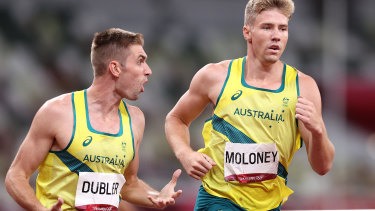 Ash Moloney is encouraged by teammate Cedric Dubler in the last event of the decathlon.Credit:Getty Images

The heart of a champion

Gymnastics at the Tokyo Olympics was only ever going to be about 24-year-old American icon Simone Biles. On the final night of competition, she made a dramatic return to the Ariake Gymnastics Centre – having sat out the events she dominated in Rio – to provide a sparkling farewell to these Games. The balance beam is Biles’ least favourite apparatus and the only one on which she didn’t win gold five years ago. But, as fate would have it, it was the only apparatus she felt safe to compete on after she was unable to remove the performance gremlins which caused her to withdraw from competition on the night of the team final. 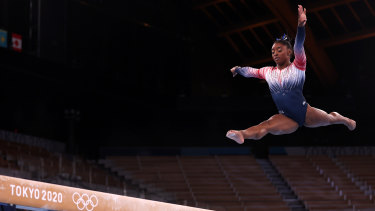 Simone Biles was back in action on the beam.Credit:Getty Images

Never miss a medal or great sporting moment with our Olympic update emailed daily. Sign up for our Sport newsletter here.