They are the Australian women who don’t officially exist.

These former wives of Islamic State fighters are believed to be stuck inside the squalid al-Hawl refugee camp in northern Syria but there is no record of them. The federal government says it has “not ruled out the possibility” that some Australians remain in the camp but cannot confirm their existence. 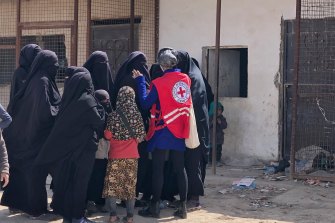 A team from the International Committee for the Red Cross visited the al-Hawl camp last month.Credit:ICRC

Last September, it was reported Kurdish officials swooped into al-Hawl and moved 20 Australian women and their 47 children to another detention centre, al-Roj, 100 kilometres away. At the time, it was believed all the Australians had been moved. The aim was to reduce pressure on the foreigners’ section in al-Hawl by moving out “less radical” women and their children.

They have been trapped there since early 2019 when they were captured in the final fall of IS’s “caliphate”. Sucked in by IS years ago, their former husbands are believed to be either jailed or dead.

The Australian government has so far declined to bring the women and children back on the basis some may pose a serious security risk and it would be dangerous for those involved in any extraction. A number of other countries, including France, Belgium and Central Asian states, have repatriated their citizens from al-Hawl and al-Roj.

Family advocate Kamalle Dabboussy, whose daughter Mariam is in al-Roj camp with her three children, said he believed there was a “small number” of Australians still in al-Hawl.

“We do have concerns for their safety and wellbeing,” he said. “This is an unsustainable situation and this needs a solution. Whether today or tomorrow, a solution is needed and delay on behalf of the Australian government doesn’t make any sense. It just causes more pain and misery.”

The Australian Federal Police last year raided homes in Sydney and Melbourne in an attempt to gather evidence against some of the women and issued arrest warrants for them in the event they make their own way home via people smugglers.

Most of the women in the camps have offered to be placed on “control orders” if they are repatriated. This would mean the women and children older than 14 could be restricted from associating with particular individuals, visiting certain locations, banned from accessing social media and be subject to strict reporting requirements and curfews if they returned to Australia.

Fabrizio Carboni, the International Committee of the Red Cross (ICRC) regional director for the Middle East, visited the al-Hawl camp last month with a team from his organisation. He said northern Syria was one of the most devastated areas of the country and “still a region that is very much on the frontline”.

“It’s a really unstable situation – it’s a deserted area but very contested. It’s probably the most complex, dangerous and unstable area in the world,” Mr Carboni said. “You have around 65,000 people who are in camps in the middle of nowhere in the hands of the local administration.”

Mr Carboni called on all governments with citizens in al-Hawl and al-Roj to repatriate them. He said his organisation wasn’t “preaching immunity”, adding the women should be prosecuted if they had committed a crime.

“We are just saying a solution should be found for people and if they’ve done something [then] investigate, prosecute and sentence. And in the case of the children – they are all victims,” Mr Carboni said. “We need to be able to show mercy, to show humanity – that’s the basic concept of many bodies of laws that Western states, including Australia, have defended.

“It’s been two years living in tents. Sometimes words are difficult to capture the misery of what it means. Two years there in legal limbo – they are deprived of their freedom, with absolutely no judicial process or legal framework giving a meaning to this.”

Mr Carboni said many other states, including Western countries, had successfully repatriated citizens, showing it was possible.

“Not being specific about Australia, but the danger and the logistics – I hear it, it’s not an easy one, but many other states have done it,” he said. “It’s not that we are naive about security but if we zoom in to what we’re talking about – children and women – we’re not talking about tens of thousands of people coming back to the West.”

“We have not ruled out the possibility that some Australians may remain in Al Hol [al-Hawl] and so continue to monitor the situation there,” the spokesperson said. “Our ability to provide consular assistance to Australians in Syria remains limited due to the dangerous and volatile security environment. Syria remains classified as ‘do not travel’.”