2020 is a year which will be remembered for a number of reasons. In purely television terms, it is the year an unassuming Canadian comedy named Schitt's Creek became our fireside companion in lockdown, and made an unprecedented clean sweep of the comedy categories at the Emmy Awards.

“Well, I don't think Schitt's Creek is the first thing we're all going to think of when we think about 2020,” actress Catherine O'Hara says, wryly. “But somehow the story of the Rose family being holed up in a tiny home with each other became something that millions of people experienced for completely different reasons.” 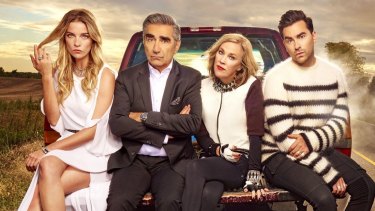 Annie Murphy as Alexis, Eugene Levy as Johnny, Catherine O’Hara as Moira and Daniel Levy as David in Schitt’s Creek.Credit:CBC

Schitt's Creek is an unlikely apex predator in the world of American comedy. Created by father and son Eugene and Dan Levy for Canada's national broadcaster CBC, it is the story of the formerly wealthy Rose family, forced to relocate to the only asset the bank could not find a buyer for, a small town named Schitt's Creek, once purchased as a joke.

So former video store titan Johnny Rose (Eugene Levy), his wife, one-time soap opera maven Moira Rose (Catherine O'Hara) and their adult children, pretentious David (Dan Levy) and aimless Alexis (Annie Murphy), find themselves living in the run-down Rosebud Motel in the town, forced for the first time in their lives to contend with the real world. And each other.

Serendipity may not be the right word here, but the experiences of the Rose family did somehow become an illustration of our shared experience in 2020.

“To have actually been a family holed up together in a small home and getting to know each other … I think there will be some good that comes out of this for the more fortunate among us,” O'Hara says. “That the time spent might lead to deeper connections and more love, rather than less. I know that people have experienced troubles living together too at this time. It's brought out the best and worst in all of us.” 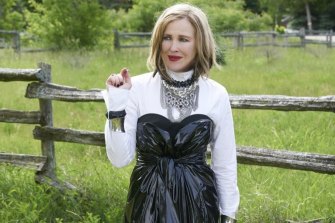 The 66-year-old Toronto-born actress is quick to point out that Schitt's Creek is just a sitcom, apologising for suggesting it has “any more meaning than what people are actually living through. But people in troubled times really do look for the positive and look for hope,” she says. “It is a comedy show. But somehow it's been a comfort to people. It's been a sign of hope.

“Not only that family members and friends can grow together and grow in love, but also that the world could be better in how we treat each other,” she adds. “People could be kinder, more compassionate. There are, of course, millions of good people spreading the good in the world. But in these scary days, you just need anything that's going to give you some hope.”

To some extent fans and critics became fixated with the premise of Schitt's Creek – the comedic situation of a rich family adjusting to life with no money – but in truth the show is more deeply based in character, about a family who have never authentically interacted and are forced by altered circumstances to finally own up to each other.

“They went into this blind,” O'Hara says. “This was a shock, having their lives ripped out from under them. I would say now, as Moira, having had the experience, I would say it was all for the best. She'd rather have done it with more money and a nicer home, but how fortunate they were to have had their lives just put on hold.” 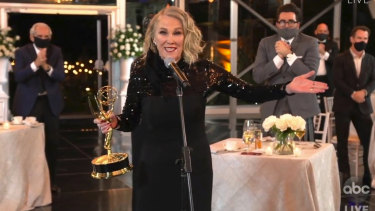 “It took a while for them to realise what a blessing this was for them,” she adds. “Talking about this show, I realise that it's hard not to keep reminding myself but it's actually going on in the world. People are suffering. So I want to apologise right now sir, for saying this has any more meaning than what people are actually living through.”

The series is now an unqualified success. Six seasons, totalling 80 episodes, were filmed and aired on CBC and the US channel Pop TV. But it was replay on the global streamer Netflix that put the show square in the sights of its biggest audience, and the industry voters of this year's Emmy Awards, where the show took its final bow and a clean sweep.

“We're the same little show we always were and we always believed in it,” O'Hara says. “I don't think we thought in terms of audiences, we were just doing the best we could do and making each other laugh and working really hard, but loving it. And COVID really did push people to stay home and watch everything that existed, including our show.”

In a curious footnote, the role of Moira Rose was one O'Hara very nearly passed up. She initially said no, citing a career-long fear of playing the one role for too long. “Daniel said they were going to move on and Eugene was thinking of other people, who else could I work with, and Daniel said, just call her one more time,” O'Hara says. “Thank God I did say yes.”

“And I don't mean to say they had to beg for me to do it, I should be so lucky and I will forever be grateful to Eugene and Daniel for giving me this fun job,” she says. “I never claimed to be brilliant in my choices. I've done movies, but that's three months' work at the most. I think it was more fear based. The concept of committing to one character.” 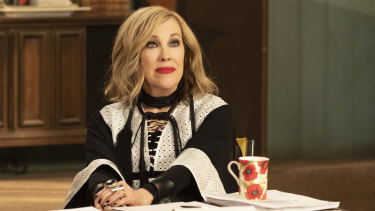 In Moira, Catherine found “a character who didn’t have to be the same character all the time”. Credit:AP 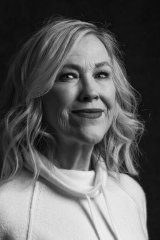 Such collaborations, like Schitt's Creek, have spoiled her, O'Hara says.

“I believe everything happens for a reason so if I stopped to give it the thought it may deserve, I feel blessed that it was [the comedy repertory company, and later television series] Second City that kind of sent me on my way, because there I was spoiled,” she says.

“[Working with] Daniel and Eugene, I was made to feel like I had something to offer,” she says. “Once you've had that, it's hard to give up. There have been times where I've been shut out sort of creatively, and I took it so personally. It would just cripple me emotionally, creatively, because I know what it's like to work the other way. And the other way, the collaborative way, is so great. In any field, really, it's wasteful not to try to bring out the best in the people around you.”

And then there is the X-factor in the success of Schitt's Creek. Not its cast, who are extraordinary. Not its creators, whose brilliance has been acknowledged. But its Canadian DNA, an intangible quality that makes it look American, but gives it a viscerally different feel.

“I grew up in a different time than now, the internet didn't exist, so from my experience, we were very much influenced by comedy like Monty Python, and comedies that came out of England, Ireland, Scotland, the UK, than by what came out of the US,” O'Hara says.

“And it's unusual now for us, for any other parts of the world to be aware of what we're doing,” O'Hara says. “It's lovely. I hope we keep our proud Canadian modesty.”

Schitt's Creek is on Netflix.