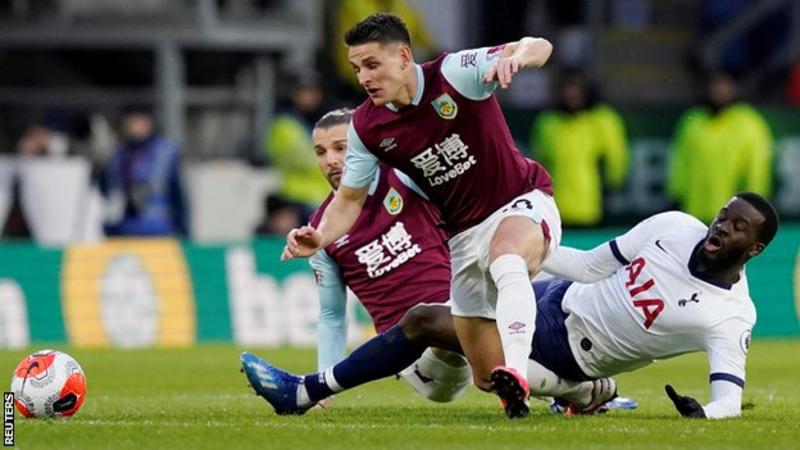 Tottenham Hotspur boss Jose Mourinho singled out the club’s £54m record signing Tanguy Ndombele for criticism after substituting the midfielder at half-time in the 1-1 draw at Burnley.

Spurs were dominated in midfield in the opening 45 and Burnley capitalised when Chris Wood put the hosts ahead.

Ndombele and Oliver Skipp were replaced at the interval by Giovani lo Celso and Lucas Moura as Spurs ralied for a draw.

“In the first half we didn’t have a midfield,” said Mourinho.

“Of course I’m not speaking of Skipp because he’s a kid of 19 who’s played two hours in the last few days. I don’t criticise him at all.

“But I’m not going to run away and I have to say he [Ndombele] has had enough time to come to a different level.

“I know the Premier League is difficult, and some players take a long time to adapt to a different league.

“But a player with his potential has to give us more than he is giving us, especially when you see how Lucas, Lo Celso and those players are playing. I was expecting more in the first half from him.”

The double change worked for Tottenham as they put in a much-improved second-half display and Dele Alli’s penalty earned the visitors a point.

Mourinho suggested Ndombele – who joined Spurs from Lyon last summer and has made 24 appearances this season – may find it difficult to get back into the side.

“Many fantastic players in their first season, in a new country, for different reasons they struggle,” the former Chelsea and Manchester United boss added. “There have been many examples of that.

“He’s a player with great talent. He has to know he has to do much better and know I cannot keep giving him opportunities to play because the team is much more important.”