Joaquin Phoenix is a Queer Eye fan. Can you believe?

On Tuesday morning, Tan France swung by Pop of the Morning and revealed that, not long after winning his Oscar, Phoenix wanted to discuss the hit Netflix show. According to the Queer Eye fashion expert, he had a chance run-in with the Joker actor at the Vanity Fair Oscars party.

“Joaquin had just won his Oscar and he wanted to talk to me and hang out with me,” France said in regards to this “pinch me” moment. “He enjoyed the Japanese episodes…he had watched them earlier on that day.”

Although France didn’t expect Phoenix to be a fan of the show, he said it was a “lovely” thing to learn. It’s safe to say that the Queer Eye stars, including France, Antoni Porowski, Karamo Brown, Bobby Berk and Jonathan Van Ness, had quite the memorable Oscars experience.

“Actually, that was a pinch me moment and I should’ve mentioned that. Being on stage with Elton John,” France expressed about hosting Sir Elton’s famed party. “He was singing, and we stood so close, I’ll never forget that for as long as I live.”

Furthermore, France credited the “Tiny Dancer” singer-songwriter as the reason he and his co-stars can “be extra.”

“We learnt from Elton long, long, long ago,” the Next in Fashion co-host explained. “All of us learned to be very extra, probably, from Elton. So, we felt like, ‘Oh, this feels right. The Don’s here, we should just respect him and be extra, fabulous.'”

You can say that again, Tan! 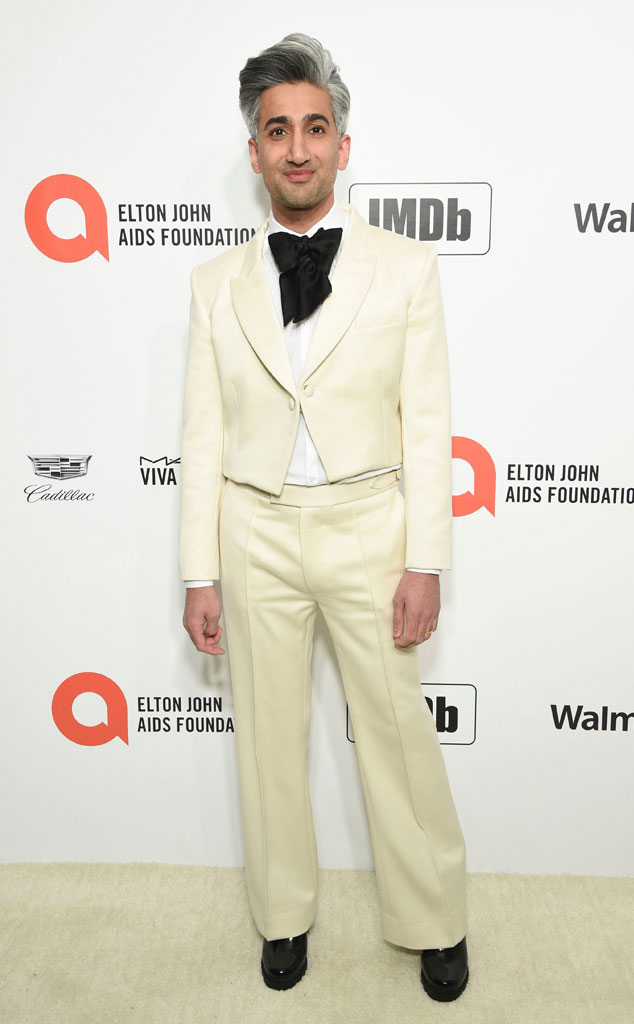 In addition to the Oscars tea the Dressing Funny host spilled, France also dished on Kim Kardashian‘s latex looks at Paris Fashion Week. While the fashion guru signed off on the bold ensembles, he admitted he enjoyed Kourtney Kardashian‘s take on the latex look more.

“I liked it. Do you know the funny thing is, I preferred Kourtney’s outfit,” France shared. “Hers was a little more toned down. I do like that it was a little dramatic, Kim’s, but there’s something about Kourtney’s.”

Not to mention, France approved of Kourtney’s hair, calling it “so good.”

“I know that Kim says that Kourtney’s not interesting to look at, I think she’s the most interesting right now,” France joked.

Speaking of fashion, France is currently drawing on his styling expertise in order to curate looks from his favorite Express pieces ahead of the Spring/Summer season. Each month, France will style dual-gender collections (and will share how to wear them). We have a feeling a French tuck will sneak in there somewhere—and we couldn’t be more excited.

For all of this and more, be sure to watch France’s full POTM appearance above!

Watch Pop of the Morning weekdays at 11 a.m.!