Swimming Australia will raise the prospect of deferring the second shot of the Pfizer vaccine until after the Olympic trials in June as it tries to ensure athletes are not hampered by side effects as they race to make the Dolphins squad for Tokyo.

Like the rest of the nation’s Olympians and Paralympians, news of the vaccination program came as a huge relief to the elite swimmers, who will be among Australia’s leading medal hopes when the Games begin on July 23. 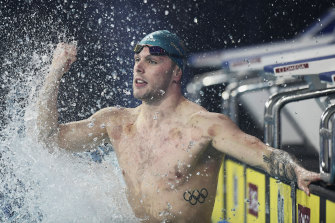 There are concerns about the impact of vaccine side effects on the performances of elite Australian swimmers like Kyle Chalmers at the June trials.Credit:AP

But the logistics for the sport are proving difficult, given no one has qualified for the Games and swimmers will need to be at their peak for the trials in Adelaide, beginning on June 12. The strict qualifying criteria set by Swimming Australia, which equates to top-eight times from the most recent world championships, means there is little room for error.

The Australian Olympic Committee is moving swiftly to begin the vaccine rollout, which it has organised independently with private firm Aspen Medical. The first doses will be administered via a series of hubs on May 10 and the second about May 31.

It is ideal timing for most competitors but, for the swimmers, any side effects just over a week out from the all-important trials could have a disastrous knock-on effect as they try to add their name to the team sheet. It would be one of the great ironies if the vaccine they had all craved led to them missing an Olympics berth.

Swimming Australia chief executive Alex Baumann said the governing body had raised the prospect of delaying vaccine doses so the second shot was administered after the trials, although they would proceed in either case, given the importance of protecting athletes in Tokyo.

‘We’ll have a discussion with the Australian Olympic Committee whether there is the possibility of doing that second jab post-trials.’

“It has been raised; we’ve spoken to coaches, we have a call on Tuesday,” Baumann said. “May 10 is the first one and they are looking at May 31. We’ll have a discussion with the Australian Olympic Committee whether there is the possibility of doing that second jab post-trials.

“In the end, there’s not a lot of repercussions from that second one other than having some flu-like symptoms. Those dates may be pretty firm though.”

Common side effects from COVID-19 vaccines include chills, fevers, fatigue and headaches. Those can be more pronounced after the second dose and while they are a normal reaction that usually only lasts a few days, they could easily throw the finely tuned preparations of an elite athlete into chaos.

Swimmers will have just one more meeting to prepare for the trials, in Sydney starting on May 13. Baumann said the event was unlikely to be conducted wearing masks on the back of the latest IOC playbook for Tokyo, which stipulates mask wearing almost everywhere, including the medal dais.

A relative lack of COVID-19 in Australia means constant mask wearing will be a new experience for many athletes, although those based in Melbourne dealt with it for long stretches last year. However, in the searing Tokyo heat and humidity, it will present an undoubted challenge.

Baumann said they would more likely begin acclimatising to masks at the staging camp in Cairns before they travelled to Japan.

“We’ll probably leave it up to individual coaches whether they want to do that [in Sydney],” he said. “We experienced it for two days at [Australian] Opens [on the Gold Coast], but it will be an individual choice. But Swimming Australia won’t mandate masks.

“They are aware of what will happen in Tokyo, but it is a different kettle of fish once you get there and get into that environment.”