The fate of Mack Horton's bitter rival, Sun Yang, will become known on Friday night after the Swiss-based Court of Arbitration for Sport announced overnight it had reached a verdict in the doping case against the Chinese Olympic champion.

The tribunal will publish its judgment at 8pm Friday AEST. If allegations of tampering with a doping sample are upheld against Sun Yang, he faces a lengthy ban from all swimming and the end of this international career. 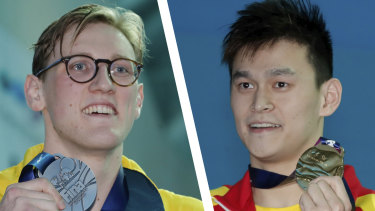 Mack Horton refused to stand on the podium with Sun Yang. Credit:AP

Sun Yang, an Olympic champion from the London and Rio Games, is China's greatest swimmer and the dominant men's freestyle swimmer of his generation. However, his career has been dogged by doping allegations.

In 2014, he served a three-month ban after returning a positive test to a banned heart medication. In 2018, he had a bizarre altercation with drug testers at his Hangzhou home when he refused to submit to urine testing and used a hammer to smash open a locked box which contained a blood sample he had already surrendered.

Sun Yang said he refused to cooperate with the testers after they failed to produce proper accreditation and began acting suspiciously during the late-night testing mission.

Sun Yang was cleared of wrongdoing by a FINA doping panel in the lead up to last year's world championships in Gwangju, South Korea, but that decision was appealed to CAS by the World Anti-Doping Agency. It was in Gwangju that Horton, having previously declared Sun Yang a drug cheat at the Rio Olympics, refused to share a medal dais with Sun Yang after finishing second to him in the final of the 400m freestyle.

Horton's silent protest created an international incident, with the swimming world divided over his actions. Sun Yang, the first Chinese man to win an Olympic gold medal in swimming, is a three-time Olympic champion and the winner of a dozen world championship titles. He is one of China's most celebrated Olympic athletes.

Tampering with a doping sample carries a mandatory eight-year ban.