The two began as fellow travellers, strangers. They became sparring partners, grew closer, fell into aligned rhythms. Eventually the pair were so attuned they could close each other’s movement sequences.

Samsara, performed by UK-based dancer-choreographers Aakash Odedra and Hu Shenyuan at the AsiaTOPA Festival, was exquisite. Named for the Sanskrit word meaning wandering or world, this work was inspired by pilgrimage stories of ancient monks: literal and metaphorical, physical and spiritual journeys. 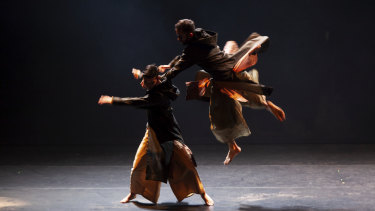 It offered one gorgeous moment after another. The opening scene was a virtuosic solo with Shenyuan’s body ebbing and flowing like lava, alternately molten and sculpted. The same sequence bookended the performance, although this time the dancer was almost naked, disclosing even more of his extraordinary fluid body.

Sand poured from sacks, performers’ hands and the heavens creating a swirling otherworldly ambience as the dancers filled the space for the finale.

This collaboration combined ashtanga-like yoga used to train warriors, Kathakali dance-style spinning, a many-armed Shiva goddess created from two bodies intertwined and punchy Chinese gymnastics. The underpinning of these with contemporary dance added the frisson that in any moment it was impossible to tell what might come next.

The musical composition by Nicki Wells was masterful, featuring live performers. Drummer Beibei Wang's passionate embodiment of her music was a performance in itself, and Michael Ormiston’s Mongolian Khoomii singing was sonorous. 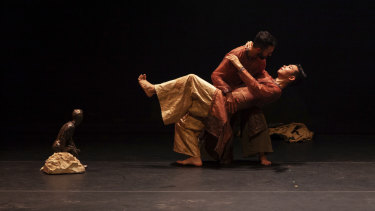 The marvellous attunement between the dancers was even more incredible considering the two share no verbal language – from India and China respectively, their partnership was enabled by interpreters and bodily understanding through movement.

The standing ovation on opening night for the entire Samsara team was well deserved.