Home » Still a busker at heart, Tones and I manages to surprise and galvanise

Tones and I was busking on the streets of Byron Bay in 2018. Now, thanks to her song Dance Monkey being streamed more than 7 billion times, she could probably buy the house next door to Chris Hemsworth if she wanted.

But this gig proved the performer born Toni Watson, circa 1993, remains a busker at heart. 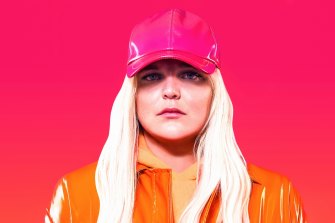 Tones and I played her first Sydney show in 15 months at the Enmore Theatre.Credit:

Why hire a band, for example, when the old keyboards still work fine? The red Roland and Nord instruments from Tones’ hat-passing days were on this night a bit like her overall persona – lacking subtlety, but always authentic.

The busker’s prerogative is to grab your attention as quickly as possible, and Tones did it with straightforward, autobiographical songs with uniformly catchy melodies, sung in a belting voice that cut through even when the backing tracks she triggered from a pad beside her keyboards were distortingly loud.

There was no second-guessing anything on this night’s setlist. Opener Can’t Be Happy All the Time found Tones spotlit at the Nord, contemplating adulation, yet resigning herself to the song’s title with starkly emotional singing.

Then Never Seen the Rain, a groover about friends being there for friends, saw Tones strutting about the stage with 20 of her own. This choir-cum-dance troupe, in purple satin robes, lent spectacle that distracted from the canned quality of the pre-recorded tracks on most tunes.

But it was the generosity of Tones’ spirit that really won over this sold-out crowd, quite a few of whom were up past their bedtime. She addressed these kids directly before unreleased ballad Lonely (punchline: “Am I the only one who feels this way?” ), expressing a wish to be there for them in low times. It didn’t feel like schtick.

Other highlights? The chorus of Hey Ya!, otherwise the weakest of the three covers Tones needed to pad out the set before her debut album drops later this year, saw her voice suddenly soar to operatic proportions. The martial The Kids Are Coming galvanised her youngest fans all over again, the choir changed to garb inspired by Black Lives Matter. Then there was the clever way she kept Dance Monkey fresh, the choir cooing on a simmering breakdown, that made the return of that big synthetic bassline more explosive.

Best was another unreleased song, Cloudy Day, written in the wake of a friend’s death. With a transcendent theme and gospel fervour akin to closer Fly Away, its extra melodic kicker may yet recapture some of that Monkey mania for Tones.

Tones and I plays two more shows at the Enmore Theatre, May 18 and 19.