A state push for a bigger quarantine regime has sparked a row with Prime Minister Scott Morrison over the road map to open the nation’s borders, as a top business chief calls for a faster plan even if some people die.

Mr Morrison infuriated critics by dismissing a Queensland proposal to build a new quarantine centre that could ease the load on other states, with One Nation leader Pauline Hanson calling him “bloody-minded” for refusing to budge. 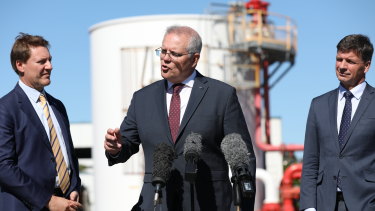 Prime Minister Scott Morrison says Toowoomba is not the right place for a quarantine centre.Credit:Dominic Lorrimer

While the federal government assumes the borders will stay closed until the middle of next year, Virgin chief executive Jane Hrdlicka said the country should speed up that plan as people were vaccinated.

“COVID will be part of the community – we will become sick with COVID and it won’t put us in hospital and it won’t put people into dire straits because we’ll have a vaccine,” Ms Hrdlicka said.

“Some people may die but it will be way smaller than with the flu. We’re forgetting the fact that we’ve learnt how to live with lots of viruses and challenges over the years and we’ve got to learn how to live with this.”

Speaking at a business lunch in Brisbane on Monday, Ms Hrdlicka said the country could afford to open its borders sooner as long as enough people were vaccinated and the vulnerable were protected.

Mr Morrison stood by the government’s border assumption, revealed in last Tuesday’s federal budget, and fended off calls for more federal help to expand the quarantine regime so more people could come into the country safely.

The federal government is open to a Victorian proposal for a new quarantine centre at Mickleham, north of Melbourne, but has dismissed a Queensland plan for a new facility near Toowoomba, west of Brisbane.

“One of the biggest difficulties with [the Queensland government] proposal [is] it’s not near a major capital city where there’s a major hospital,” Mr Morrison said.

“The idea you can put it in the desert somewhere – I know that Toowoomba isn’t a desert – but they need to be close to major capital city airports. They’re coming to Brisbane. That’s a very long trek to Toowoomba.”

NSW Premier Gladys Berejiklian called on Monday for an “ambitious” plan to vaccinate Australians and open the borders but has expressed frustration that other states are not doing more to expand quarantine.

“What’s most important is the judgement in 10 years’ time. It’s not about the 24-hour news cycle and rocking up and being successful at a news conference, it’s about making sure we have a strategy to open up the economy.“

Federal ministers dismissed the Victorian proposal at first, with Defence Minister Peter Dutton saying it was “political smoke and mirrors”, but the Prime Minister has warmed to the idea in recent weeks.

While Toowoomba has a hospital and a workforce as well as a private airport that could take large aircraft, federal sources said it was different to the Victorian plan and did not satisfy the key criteria to gain funding.

But Senator Hanson backed the proposal and said she did not understand why Mr Morrison did not do the same.

“If it’s not going to cost the taxpayers any money – not one dollar – then why doesn’t he just open it up? If we open up the borders next year, facilities have to be operating and working,” she told Sky News.

“When they want to set up this structure, put it there at no cost to the federal government, why would he knock it? I can’t see any problem with it. Why is he so bloody-minded?”

The Toowoomba proposal, aired by the local Wagner family to use its Wellcamp Airport near the regional city, requires federal approval to route large commercial flights to the airfield.

Local Liberals and Nationals are opposed to the idea and the community is divided, but proponents doubt it could work if travellers have to transfer to Toowoomba on a two-hour bus ride from Brisbane Airport.

While Queensland Premier Annastacia Palaszczuk did not respond to Mr Morrison’s remarks, federal Labor MPs in nearby electorates said the Prime Minister should negotiate with the state to expand quarantine.

“Scott Morrison is trying to avoid responsibility for quarantine but it is a federal responsibility. If national cabinet means anything he should be taking up the Queensland state government’s proposal,” said Shayne Neumann, who represents Blair, north of Toowoomba.

Milton Dick, the MP for Oxley in Brisbane’s south-west, said Mr Morrison should come up with a solution if he did not think Toowoomba suitable.

“He’s abrogating his responsibility and seems to want to pick a fight with the Queensland government,” he said.

Australian Industry Group chief Innes Willox said there would be an economic cost to longer border closures when the country should instead prepare to live with the coronavirus.

“Investment, students, tourists – they’ll all go elsewhere, and that’s going to be a big danger for us as we emerge from this,” he said.

“There are two messages from going on here from government which are confusing people. One is that we have to go and get vaccinated, but even after we get vaccinated we’re still not allowed to go anywhere.