Sperm whales are the largest toothed predator in the world, and there are believed to be around 360,000 alive today. They’re one of the most abundant great whales, but their modern-day population numbers may not have been so high if they hadn’t learned to adapt to human whalers in the 1800s.

The whales quickly learned to avoid humans and their harpoons in the 19th century, according to a new study published in the Royal Society.

Sperm whales were heavily hunted in the north Pacific Ocean at the time, as well as all over the world.

They tended to live in small social units, usually including young whales or family members.

But social learning and defensive measures meant that the whales started to avoid American whalers over time, the scientists claimed. 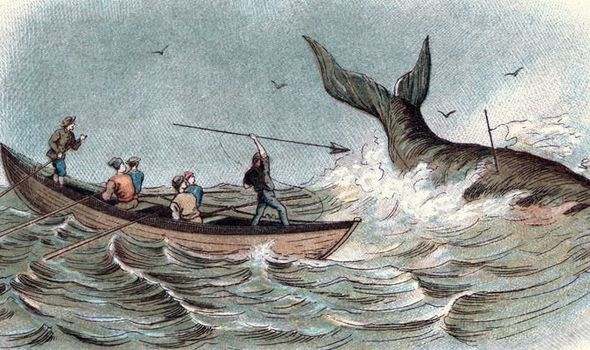 Harpooned whales fell by about 58 percent over a single region within the first few years of whaling exploitation, revealed Dalhousie University experts, in Canada.

“This decline cannot be explained by the earliest whalers being more competent, as their strike rates outside the North Pacific, where whaling had a longer history, were not elevated,” the researchers wrote.

“The initial killing of particularly vulnerable individuals would not have produced the observed rapid decline in strike rate.

DON’T MISS
WATCH: Whale rescuers fight to save pod of beached ocean giants [VIDEO]
Whales live longest in memory as seeing them is such a privilege [COMMENT]
Was mass stranding of sperm whales caused by cosmic forces? [ANALYSIS]

Whalers reported an increase in defensive measures over time.

The whales appeared to communicate danger to one another, whenever they were confronted by whalers.

They’d also try to swim upwind, which would be problematic for any pursuing whaler ship.

On rarer occasions, the sperm whales would even fight back and attack the ships. 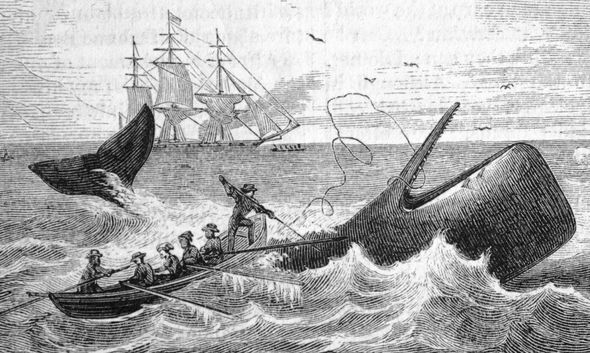 Nowadays, sperm whales aren’t hunted anywhere near as often, and there’s still debate over its sustainability.

It was listed as endangered under the Endangered Species Act in 1970, which means it’s in danger of dying out completely.

Several species recovery plans have been launched, with the aim of increasing population numbers in the wild.

The plans encourage the reduction of injury or mortality by collision with ships, as well as those from fishing gear.

Orcas are the largest natural predator to sperm whales. They tend to stalk entire pods of sperm whales in the hope of picking off a calf or a female.

But, they have been known to shove small vessels whenever they come too close.

Scientists have claimed it’s an evolutionary response to past human aggression, and could become hostile.