Smaller killer whales are the best singers: Ross Sea orcas have 28 musical notes made of burst-pulse sounds and whistles which they use to communicate with each other

The smallest killer whales have a vast musical range of up to 28 notes that are used to communicate with family members.

Ross Sea orcas are the smallest of the five types of killer whales but are better singers than their bigger cousins.

The predators, also known as Type C killer whales, can grow up to 20 feet long and use burst-pulse sounds and whistles to communicate.

It is thought this wide variety of noises helps convey messages about changes in landscape and habitat to nearby whales.

Researchers also discovered the mammals, found in the McMurdo Sound in Antarctica, often make two sounds simultaneously to locate members of their pod. 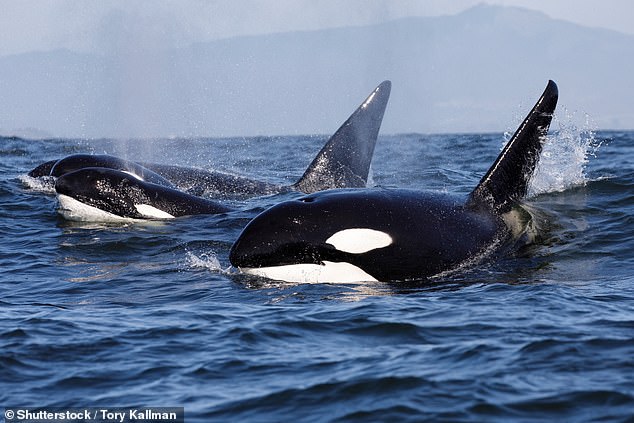 The predators, also known as Type C killer whales, can grow up to 20feet long and use burst-pulse sounds and whistles to communicate. It is thought the wide variety of noises helps convey messages about changes in landscape and habitat to other whales (stock image)

‘We were able to identify that the calls of the Type C killer whale are multi-component, meaning that many calls transition from burst-pulse sounds to whistles.

‘We also found that 39 per cent of the call types started with a series of ‘broadband pulses’.’

Ms Wellard said the remoteness of the whale’s habitat and harsh polar climate can make it difficult to monitor the movements of Ross Sea killer whales.

However these research projects are essential to better understand their behaviour and acoustic repertoire, she says.

The most common killer whale behaviours observed in the study were travelling and foraging under the ice, and socialising at the surface.

Researchers believe this could explain the increase in call rate.

Ms Wellard added: ‘During the calls, often two of the sounds occurred at the same time, also known as biphonation.

‘These types of calls could be used to locate where other members of the pod may be.

‘Due to the shifting and changing habitat in McMurdo Sound, calves could also be using biophonic calls to communicate with family members about available breathing holes.

‘Our findings provide an initial step towards comparing and distinguishing Type C killer whale acoustics with those of other killer whale populations in the Southern Hemisphere.’

The research, published in the journal Royal Society Open Science, analysed data collected in 2012 and 2013.

WHAT DO WE KNOW ABOUT WHALE SONG?

For a long time it was believed that whales sang solely for mating purposes.

But some experts suggest the songs also help the mammals explore their surroundings.

Researchers have recorded humpback whales changing their calls when they move to new pastures in order to match the songs of others around them.

Learning these songs may help whales pinpoint one another and group together better when in unfamiliar waters.

It is tricky for scientists to study how whales sing, as the shy beasts are notoriously difficult to observe, and each species vocalises differently.

Humpback whales sing using folds in the vocal box that vibrate at low frequencies as air is pushed over them.

It has been suggested they have special air sacs adjoining these vocal chords which connect to the lungs.

These allow the whales to pass air between their lungs, the sacs, and the vocal chords without losing any of their precious air supply.