The $200 billion in emergency assistance the Morrison government has announced over the past two weeks should shore up the economy through the coronavirus crisis. But the unprecedented stimulus package raises some hard questions about what happens after that.
How should Australia repay eye-watering national debt? How soon can some of these programs be scaled back? And what pre-COVID-19 spending and revenue measures should be reconsidered? There are no easy answers. 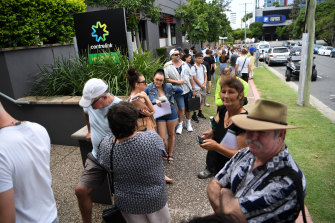 Thousands of Australians have already lost their jobs or had their incomes cut as a result of the coronavirus pandemic.Credit:AAP

The Coalition, traditionally the party of free enterprise, launched the biggest ever expansion of the role of government in Australia’s peacetime history. Its willingness to spend is to be commended. But who would have dreamed a month ago that Prime Minister Scott Morrison would switch to guaranteeing a big chunk of wages and making childcare free?
The government is right to pay attention to the long-term sustainability of our debt but its response must not be coloured by ideology. Cutting back spending too quickly risks the economy slumping into a deep recession.

In a show of fiscal virtue, Mr Morrison on Thursday said he wanted a ‘‘snap back’’ in spending at some point. His choice of words is open to interpretation but a gradual winding down of emergency measures is the best approach.
Economic support should be reduced steadily as the economy recovers, but only once the surge in unemployment starts to subside. Rather than slashing all emergency benefits, the government should make them incrementally less generous and harder to get.
Mr Morrison yesterday hinted that over the next six months Australia could start relaxing some of the extreme social distancing measures.

That is good news but economic recovery will take a long time. It could be a year or more before all of the restrictions are rescinded. Some industries such as international tourism and education might take years to recover properly.
In all likelihood the budget will remain in deficit for years. Yet it is important to put Australia’s situation in context and realise that Australia has financial room to move even now. Thanks to the tight budgeting of the past five years by the Coalition, debt was low compared to most countries before the crisis. For example, current Australia’s government net debt as a share of the economy is only about a quarter the size of government debt in the US.
Thanks to this buffer, Australia is not in immediate danger of losing its AAA rating and our credit is still seen as one of the safest bets on global financial markets. Gradually winding back the temporary stimulus should be enough to reassure markets but Australia will have to make some fundamental decisions about whether to make any part of the enormous expansion in the welfare state over the past four weeks permanent.

On the one hand, conservatives are right that excessive welfare can undermine economic flexibility and reduce the incentives to find work. But on the other hand, it will be politically difficult for Mr Morrison to cut back on things such as free childcare that are popular with aspirational voters.
He could also struggle to reverse the rise in the Newstart allowance, which even some business groups have said was too low.

Mr Morrison may also have to go against all his political instincts by raising taxes to help fill the gap in the budget.
The federal government has barely had time to catch its breath in the past month and until the immediate pandemic crisis has eased, these debates are largely academic. Perhaps, however, by the time Treasurer Josh Frydenberg hands down his delayed budget in October he will be in a position to sketch out the broad brushstrokes of a plan for the years ahead.