AN Indian Super League game descended into chaos after a player allegedly bit an opposition defender.

Edu Bedia, 31, from FC Goa was accused of biting Deepak Tangri of Chennaiyin FC on his waist. 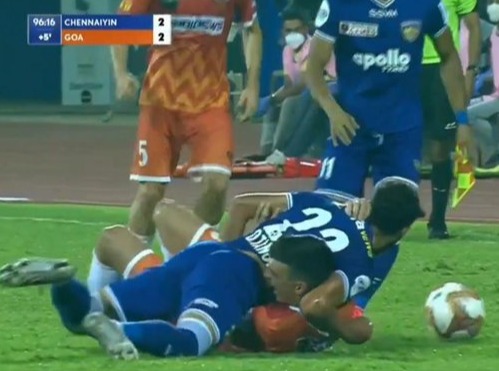 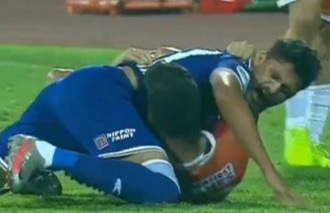 But the Spanish midfielder denied the bite and has two days to respond to a disciplinary charge.

The pair fell to the ground after contesting a header when the apparent incident happened.

As Tangri landed on top of Bedia, the Spanish midfielder's face made contact with his side.

Tangri rolled away clutching his stomach before standing up and confronting Bedia.

Bedia picked up a yellow card which resulted in a one-match Indian Super League ban.

But he issued a statement on social media after the game denying a bite.

BARCA vs PSG OFFER: GET MESSI AND MBAPPE TO SCORE AT 70/1

The FC Goa midfielder wrote on Instagram: "I want to clarify that on TV it looks like I bite an opponent player when there is only a small struggle and a gesture of anger, but never a bite.

"Maybe the images make things the way they are but Deepak Tangri knows what really happened."

The All India Football Federation accused Bedia of 'unsporting behaviour'.

A statement said: "Bedia was reported of 'unsporting behaviour towards CFC player Deepak Tangri.' The Committee has given the Spaniard until 17th February to submit a reply."

The game ended in a 2-2 draw on Saturday night in Bambolin, western India.

FC Goa are fourth in the Indian Super League after 17 games while Chennaiyin are eighth.