According to court documents obtained by E! News, a judge granted Joe’s (whose real name is Joseph Maldonado-Passage) request for an extension to file an objection in the civil case. In a letter submitted by Joe, which you can read below, the former zookeeper writes from a Texas prison medical facility, where he was placed in quarantine due to coronavirus concerns.

“Sorry for the handwritten letter,” Joe writes, “However I am being isolated at the Federal Medical Center in Fort Worth and have no access to a computer, phone, email or library to respond to the government’s last request. I am asking for at least [a] 30-day extension to the deadline of April 28th, 2020 in hopes I am allowed access to use things in order to properly answer their request.”

E! News can also exclusively report that as of Thursday, Joe is out of quarantine and transferred to a special housing unit within the prison he’s serving his 22-year sentence in.

He will now have more time to respond to the federal magistrate judge, who in documents filed on April 8 and obtained by E! News, recommended to the district court judge that Joe’s lawsuit be dismissed. 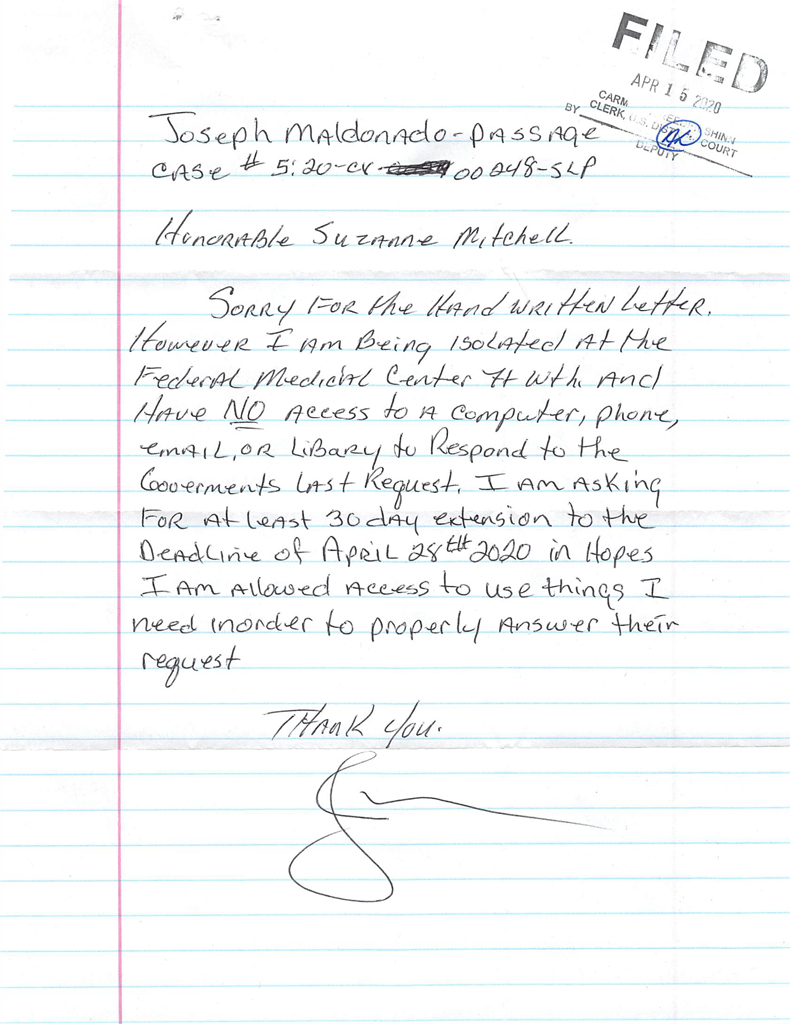 According to the documents, Joe is seeking “$73,840,000.00 in damages and an additional $15,000,000.00 for false arrest, false imprisonment, discrimination, malicious prosecution, selective enforcement, misinterpreting the law and the death of [his mother] Shirley Schreibvogel.”

The judge writes in his recommendation that Joe does not have an attorney, adding that his complaint “[failed] to cite proper legal authority” and had a “confusion of various legal theories,” “poor syntax and sentence construction.” He recommends Joe re-submit the case as a habeas corpus proceeding, and argues that the civil case cannot be heard until his criminal appeal proceeds.

Joe is currently appealing his 2019 conviction for killing five tigers at his Oklahoma zoo and attempting to execute a murder-for-hire plot against wildlife conservationist Carole Baskin.

In a recent interview with Netflix from behind bars, Joe said, “It’s now time to turn the tables and Joe get out of jail a free man and exonerated from all these charges.”