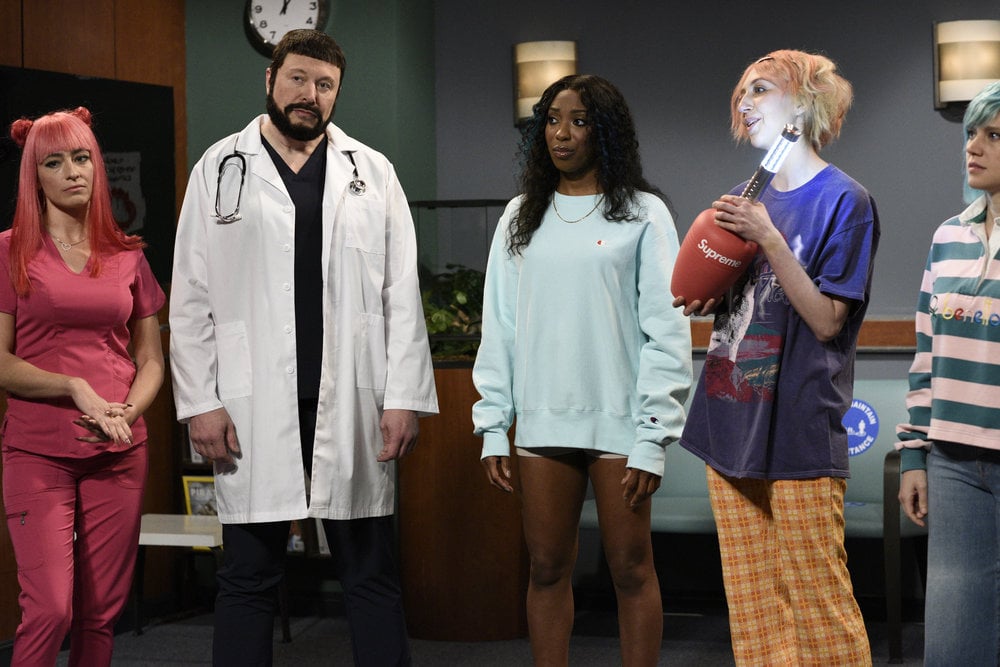 Saturday Night Live‘s May 8 episode garnered a lot of raised eyebrows. The week before the episode taped, social media buzzed about the unusual hosting combination of a rebranded Miley Cyrus and tech-billionaire Elon Musk. Watching the episode, however, it wasn’t the hosting duo that dominated my thoughts — it was writing and acting during the ill-conceived skit “Gen-Z Hospital.”

Before the pseudo-intro had even faded to the background, the discomfort has already set in my body. A group of friends are waiting in a hospital lobby for the doctor to give an update on their “bestie.” The characters start talking with intentional “Gen-Z” lingo in their secondhand Depop shirts and cross-body bags. “If he keeps leaving us on read, he’s gonna catch these hands on gang,” says a pixie-cut Heidi Gardner. Even the doctor played by Musk throws in some “no caps”s for the audience to laugh at.

It took me a second to understand my intuitive uneasiness, but as it kept playing, I realized what makes this sketch uncomfortable is that if we didn’t know the sketch title, this would pass as essentially comedic blackface. The language wasn’t taken from Gen-Z; it was taken from the Black community. SNL‘s use of Black vernacular and language is unsettling and overall, doesn’t make for good comedy.

But this is how the TikTok kids are talking! This has nothing to do with race!

Race within the digital realm is a new territory that we are all trying to navigate. Is it okay to retweet something with the N-word if you aren’t Black? Am I being enough of an activist on my social media? Am I being too much of an activist? Did I overuse this filter and accidentally do blackface? The waters are even murkier on these content-driven platforms where the gap between creators and consumers is non-existent. We decide what goes viral, what trends and what flops. TikTok is a clear reflection of this type of relationship and power that consumers have.

With the app’s cultural dominance over the past year, skepticism and critiques of its effects have followed, as they always do. One of those criticisms is the way some users use specific language and verbiage to go viral. Much of that verbiage is directly taken from Black people. AAVE, or African-American Vernacular English, was a way of speaking that bonded lower and working-class black people and is still used today, but now, it’s by more than just Black people.

“Hella.” “Woke.” “Sis.” “Snatched.” “Deadass.” What was once scolded and dubbed “ghetto talk” has quickly jumped to being supposedly funny and sensationalistic. YouTube influencers and Instagram comedians have been checked time and time again for acting Black or using a specific voice when trying to go viral or just be funny.