“I never got close to Bryce in that way. We respect relationships out here.”

Samantha ‘Saiviantha’ Salvador, is a rising Instagram influencer who has gotten herself caught up in the web of rumors surrounding Bryce Hall’s relationship with Addison Rae.

While Hall took to Twitter to tell his followers that he “didn’t cheat on Addison,” Saiviantha’s name has been dragged through the mud online and she’s ready to take back the narrative.

Saiviantha was recently spotted alongside Bryce during his trip to Las Vegas for his newest vlog and many internet sleuths are trying to connect the dots.

After Saiviantha was bombarded with hate and several accusations online she took to her Instagram Story to clear her name and said: “I wasn’t originally going to address this because the truth always comes out but now that my name [is] being dragged through the mud, I think it’s important to say my part. I actually met Bryce and his team that night because I was connected by a really good friend of mine to go there for work. It was a business, networking type of thing.”

According to the IG model, Bryce “was on FaceTime with Addison most of the time,” and even serenaded her with a piano performance.

“He acted like he had a girlfriend,” she emphasized. 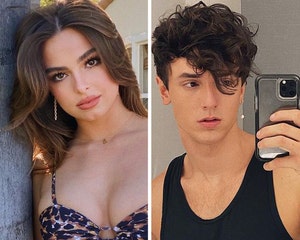 Saiviantha continued to explain, “There was nothing I saw that was disingenuous, or anything I would label sketchy. I never got close to Bryce in that way. We respect relationships out here.”

Fortunately, it seems the TikTok power couple are still going strong as Hall clarified while speaking with paparazzi outside Saddle Ranch last weekend: “Everything’s fine. I don’t know why everybody overreacts, but until we do our own thing or say anything—I don’t know, I feel like everyone’s overreacting about stupid s—.”

Addison has yet to publicly acknowledge or comment on any of the rumors circulating online.