Investment in large scale renewable energy and rooftop solar remains strong despite the disruption from the coronavirus pandemic, according to the Clean Energy Regulator's latest quarterly report.

Clean Energy Regulator chairman David Parker said Australia was still on track to hit a new high of 2.9 gigawatts of capacity, up from 2.2 gigawatts last year, even after the coronavirus lockdown in Victoria put a hold on the installation of household rooftop solar panels. 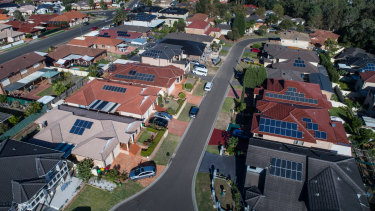 Households are getting faster return on their rooftop solar investment while working from home.Credit:Wolter Peeters

The regulator's general manager Mark Williams said he was "very surprised" at homeowners' appetite for rooftop solar amid the pandemic.

He put the strong installation rate down to the increased return on investment rooftop solar buyers get when they work from home and use more power.

"In most capital cities the payback for a 6.5 kilowatt system is about four years, but with working from home that's about three years," Mr Williams said. "That's because you can better match your daytime power production with your daytime power demand when you work from home."

Mr Parker said the outlook remains strong with a forecast that "installed capacity may double over the next four years to 26 gigawatts". 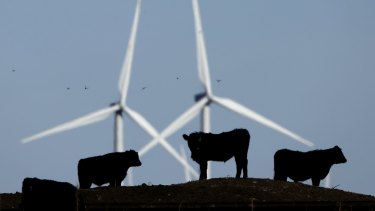 The report, published on Wednesday, noted large-scale wind and solar projects are also looking up. Final investments were made on 2.5 gigawatts worth of big renewables projects up to the end of October with a similar forecast for next year.

Three gigawatts of large-scale renewable power is expected to reach final investment by year's end, which Mr Williams said would deliver power generation into the grid equivalent to about one gigawatt coming from a "good sized coal power plant".

Renewable energy is expected to reach about 30 per cent market share by the end of 2020.

"Australian families and businesses are adopting new energy technologies like rooftop solar at record-breaking rates, and we expect this trend will continue for the foreseeable future," he said.

Australia's vast pastoral lands could potentially deliver significant abatement of greenhouse gas emissions, but take up has been low despite soil carbon capture being eligible for financial support under the federal government's $2 billion Emissions Reduction Fund.

"Interest in soil carbon projects is emerging with a pipeline of 50 soil carbon applications on hand," Mr Taylor said. "This is a welcome trend that can help bring new income streams to Australia's farmers as well as boosting agricultural yields and resilience."