“They have shut the entire f–king country down!”

“The Real Housewives of Orange County” is back on Bravo this fall — and the network just dropped the first trailer for the new season.

While Shannon Beador, Kelly Dodd, Emily Simpson, Gina Kirschenheiter and Braunwyn Windham-Burke are all back — joined by newcomer Elizabeth Lyn Vargas — this is the first season without OG Vicki Gunvalson. Tamra Judge, who joined in S2, is also out.

The trailer begins on a positive note, as the season began filming in February, before the Covid pandemic really hit. “I’m excited for 2020!” exclaims Shannon, totally unaware of what was to come.

The footage is also filled with the women flinging “F–k yous” at each other, Dodd trying on wedding dresses after her engagement to Fox News’ Rick Leventhal, glass throwing and Shannon shouting, “Don’t you dare accuse me of something that I did.”

Then, comes Covid, as production temporarily shuts down, the women are seen filming their own emotional confessionals at home, walking through empty streets and wearing masks.

Shannon, who revealed she tested positive, is even seen with a breathing apparatus.

At another point, production even has to remind the women to follow social distancing guidelines by sitting six feet apart, breaking the fourth wall.

The new season kicks off October 7 on Bravo. 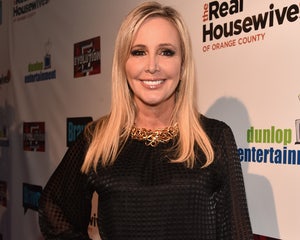