Even after stepping down from his duties, having his titles stripped, and settling out of court with his sexual assault accuser, the royals haven’t cut ties with Prince Andrew. But according to a new book, if Prince William had his way Andrew would be banished from the family now.

Here are the claims being made in a new book about what the future king reportedly told other royals to do when it came to anything pertaining to his uncle.

In January, prior to Andrew reaching a settlement with Virginia Guiffre, Queen Elizabeth II took away his military affiliations and remaining patronages.

Buckingham Palace released a statement that read: “With the queen’s approval and agreement, The Duke of York’s military affiliations and royal patronages have been returned to the queen.”

But just a few months later in a surprising move, the monarch had her second oldest son accompany her to her seat for Prince Philip’s memorial service. That left many members of the public scratching their heads. However, after the queen’s reign ends the Duke of York won’t be in the royal spotlight anymore, especially if Prince William has anything to say about it. 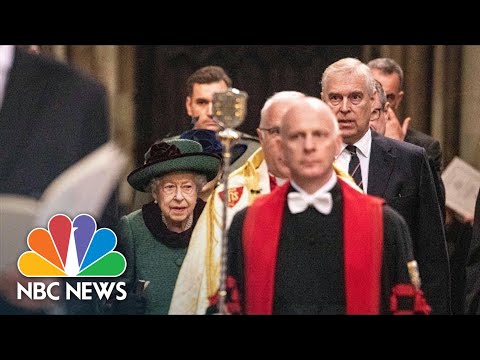 The Express noted that claims about the Duke of Cambridge’s position on Prince Andrew come from Robert Jobson’s new book titled William at 40: The Making of a Modern Monarch.

A source told Jobson: “The decision over the Duke of York was very difficult for the queen and the Prince of Wales. They were obviously closer to Andrew than his nephew” but William “could evaluate just how damaging his uncle was to the long-term future of the monarchy.”

Jobson added that William was “able to take the emotion out of the situation. ”

The book also claims that when Andrew’s court case progressed to the point of a potential trial William went “straight” to the queen to explain “calmly and clearly that Andrew’s role in the royal family had become untenable.”

Jonson wrote that another source told him that “there will be no public role or comeback for [Andrew] if the Duke of Cambridge has any input on the matter — and let me assure you, he does. He should be banished, as far as Prince William is concerned.”

Prince Andrew lost another ceremonial honor recently when the council in the city of York voted unanimously to withdraw the prince’s “freedom of the city.″

The decision was made on April 27 and York City Councilor Darryl Smalley stated that the city was following the example set by Queen Elizabeth in removing the duke’s honorary titles.

“She saw that it was doing serious reputational damage to those military institutions and charities and so stepped in to remove him from those positions,” Smalley said according to the Associated Press. “We believe very strongly, and many residents agree with us, that we should be removing all links between our city and Prince Andrew.”