In a speech to the United Israel Appeal NSW donor dinner in Sydney on Thursday night, Mr Morrison also said voters should contribute more to the community than they expect from the state. 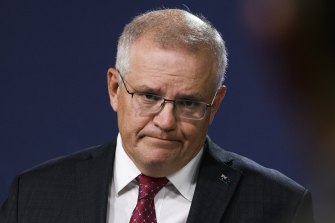 Mr Morrison made the remarks in a speech – in which he repeatedly referred to his Pentecostal faith – called “the responsibility of citizens in building community to achieve national success”.

“As citizens, we cannot allow what we think we are entitled to, to become more important than what we are responsible for,” he told an audience that included his best friend and prayer partner cabinet minister Stuart Robert and Liberal backbenchers Dave Sharma and Julian Leeser.

“I would argue that we must protect against the forces that would undermine community – and I don’t just mean the social and moral corrosion caused by the misuse of social media and the abuse that occurs there.

“It also includes the growing tendency to commodify human beings through identity politics.

Mr Morrison said reducing ourselves to attributes, or dividing along these lines, made us lose sight of “who we are as individuals.”

“When they define each other by the boxes we tick or don’t tick – rather than our qualities, skills and character, and we fail to see or value other people as individuals,” he said.

He said the Jewish community understood better than other groups what happens when people are “defined solely by the group they belong to, or an attribute they have, or an identity they possess.”

Mr Morrison referred to a speech he gave to his own church community last week in which he said social media could be used as a “weapon” by “the evil one.“

Unlike his speech to the Jewish community, the prime minister’s office has never issued a transcript of that speech, which was uploaded to YouTube by Rationalists Australia.

Referencing the writing of the late Rabbi Lord Jonathan Sacks, the Prime Minister cited the “covenant of community” where citizens “step up and play a role” but warned this concept was at risk.

“That is the moral responsibility and covenant of citizenship – not to think we can leave it someone else,” he said.

“There is a warning though. Where we once understood our rights in terms of our protections from the state; now it seems these rights are defined by what we expect from the state.

“As citizens, we cannot allow what we think we are entitled to, to become more important than what we are responsible for,” he said.

Mr Morrison said “human dignity” was “foundational to our freedom” and an important restraint on government in a liberal democracy and that seeing a person’s inherent dignity was the “foundation of all morality.”

“It makes us more capable of love and compassion; selflessness and forgiveness.

“Because if you see the dignity and worth of another person, you’re less likely to disrespect them, insult or show contempt or hatred for them, or seek to cancel them, as is becoming the fashion of some.

“Morality is also the foundation of true community.”