Spectacular pictures of the ‘worm’ supermoon have been captured lighting up the night sky by photographers around the world.

The March full moon will reach peak fullness tonight at 5:48pm GMT – but it appeared full from Sunday night and will still be visible through to Tuesday.

The Worm Moon will be ‘spectacularly bright’, according to the Old Farmer’s Almanac, and appear about seven per cent larger than a normal full moon.

A supermoon occurs when the full moon nearly coincides with perigee – the point in the orbit of the moon at which it is nearest to the Earth. 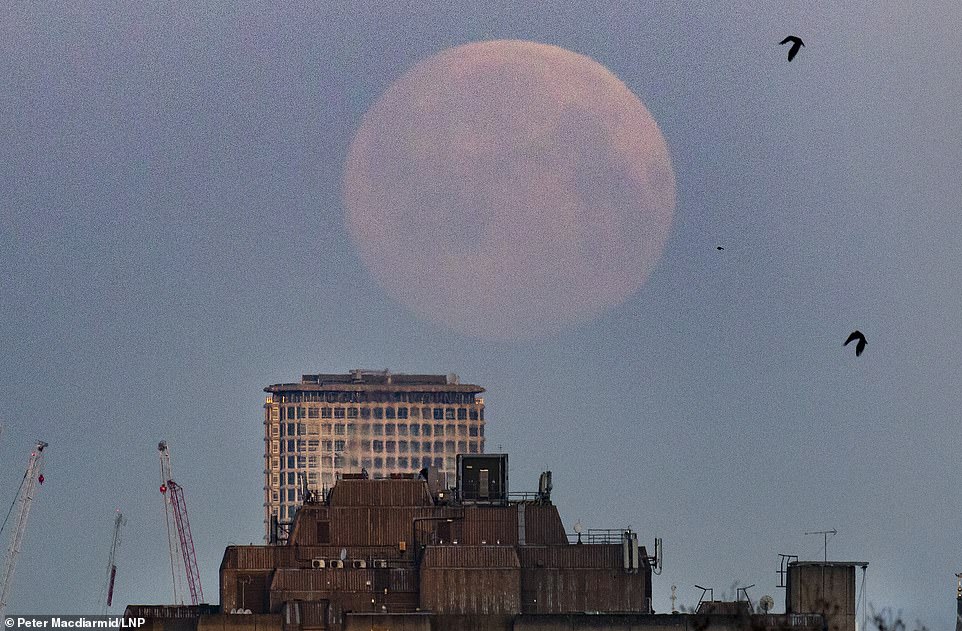 The near full supermoon sets over London. Also know as the Worm Moon at this time of year – it will be at it’s fullest as it rises later today 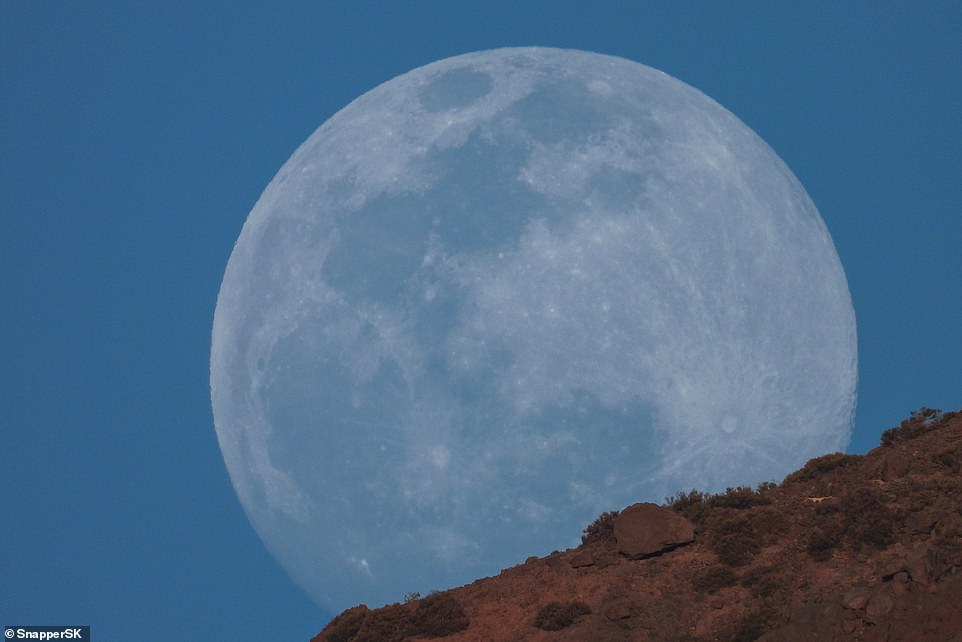 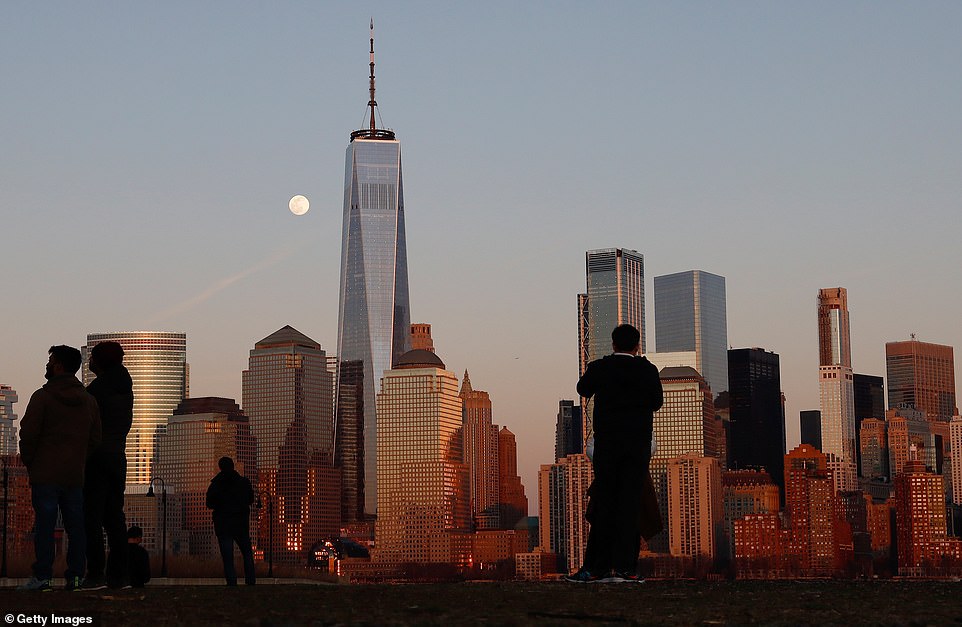 The moon at 99.0 per cent rises behind One World Trade Center and the skyline of lower Manhattan in New York City at sunset on March 8, 2020 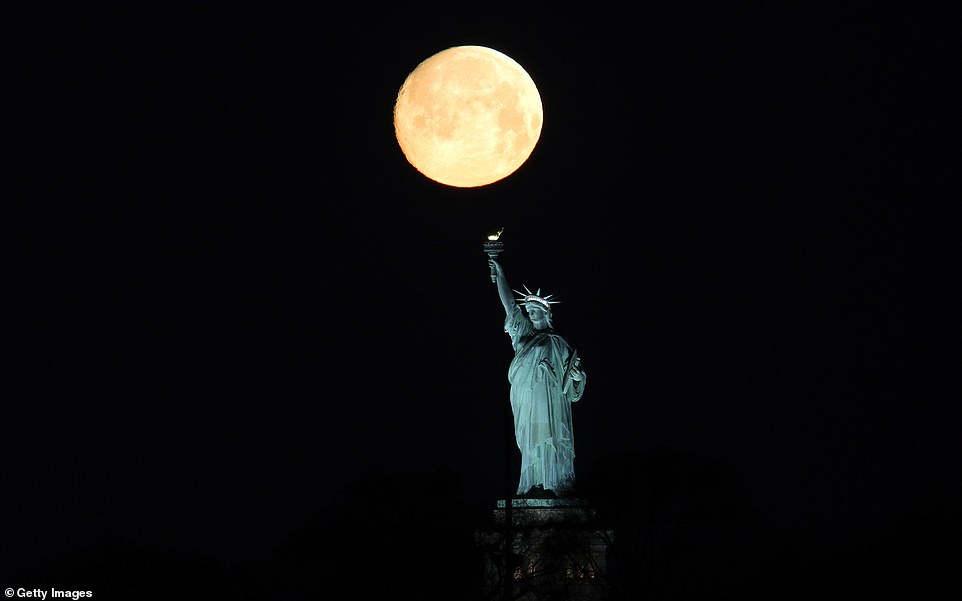 Earlier Sunday evening an almost full moon at 97.6 per cent sets behind the Statue of Liberty in New York City. The Super Worm Moon will rise on March 9 and reach peak at 5:48pm GMT

At perigee a supermoon can appear as much as 14 per cent larger and 30 per cent brighter than normal, when viewed from Earth, depending on the time of year.

Full moon names, which are used to describe the supermoons, were historically used to track the seasons and therefore are closely related to nature.

‘Worm Moon’ is the common name for March’s full moon because at the time it appears the ground begins to soften and heaps of soil left by worms start to appear.

This invites the return of birds to feed, which is seen as a sign of springtime  starting to return after a long winter.

A ‘supermoon’ appears to us as a larger-than-usual Moon in our night sky.

A supermoon takes place when the moon is full and its orbit at its perigee point is closest to Earth.

As the moon orbits in an ellipse its closest point – the perigee – will come very close to earth. The farthest point of the ellipse is called the apogee.

When a full moon appears at perigee, the moon looks brighter and larger than a regular moon, hence the nickname supermoon.

The Worm Moon is the second of the supermoons to grace the sky this year, following the ‘Snow Moon’ in early February, so-called as it often coincides with heavy snowfall.

The closest full supermoon of the 21st century will occur on December 6, 2052.

Astronomers differ on what they believe constitutes a ‘supermoon’ – however, the original definition as coined by astrologer Richard Nolle in 1979 puts it as a full moon or new moon that comes within 90 per cent of its closest approach to Earth.

If possible, the best time to view the full moon is when it is close to the horizon, due to an optical illusion that makes it appear bigger due to its relative size compared to buildings, trees and other objects in the foreground.

Astronomers advise photographers to download apps and maps to track the progress of the moon across the sky, in order to make sightings easier.

FULL MOON NAMES AND THEIR MEANINGS

January: Wolf Moon because wolves were heard more often at this time.

April: Pink Moon as it heralded the appearance of Phlox subulata or moss pink – one of spring’s first flowers.

May: Flower Moon because of the abundance of blossoms.

June: Strawberry Moon because it appeared when the strawberry harvest first took place.

July: Buck Moon as it arrived when a male deer’s antlers were in full growth mode.

August: Sturgeon Moon after the large fish that was easily caught at this time.

September: Corn Moon because this was the time to harvest corn.

October: Hunter’s Moon after the time to hunt in preparation for winter.

November: Beaver Moon because it was the time to set up beaver traps.

December: Cold Moon because nights at this time of year were the longest.