PAYDAY lender Peachy has collapsed into administration leaving thousands of customers wondering what happens to their loans.

The firm, which advertised a representative APR of 855 per cent on its website, has appointed administrators from Smith & Williamson to take over the running of the business. 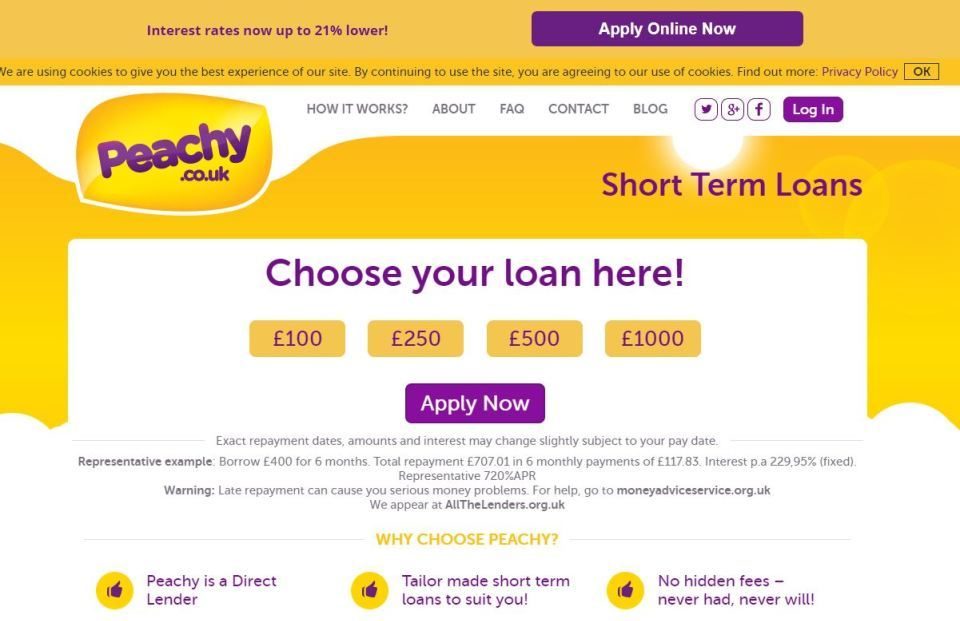 The collapse means Peachy won’t be taking on new loan applications, while existing customers have been warned they still need to keep up repayments.

Customers who fall behind risk damaging their credit score or being hit by additional charges.

On its website, Peachy says loans should be repaid "in accordance with the timetable agreed when your loan was taken out" and confirmed its bank details will remain the same.

Customers can also still contact Peachy via its customer support line on 0800 0124 743 if they're struggling to meet repayments.

Are you due a payday loan refund?

MILLIONS of payday loan customers may be due refunds.

Refund or compensation is often given where the loan was mis-sold or where affordability checks weren't stringent enough. Here's all you need to know:

If you believe you were sold an unafforable loan, you can still make a complaint directly to Peachy.

However, it's not clear how the administration process affects your chances of getting money back.

We've contacted both Peachy and the Financial Ombudsman Service for more information regarding this and we'll update this article when we get a response.

Customers are being advised to send complaints to [email protected] or to call its customer support line on 0800 0124 743.

Peachy was owned by Cash On Go, which confirmed its other business Uploan has also collapsed today.

How to claim compensation from payday lenders

IF you think you are owed compensation from a payday lender then here's how to claim according to money blogger DebtCamel:

You may also me entitled to compensation if you had any late repayments, or if you took out back to back loans because this shows that you really couldn't afford to take out a new one.

Look back through your emails, bank statements and credit reporter for evidence.

You'll need to write a formal complaint letter to each lender explaining how you were irresponsibly lent to and include the evidence.

You'll need to cite "unaffordable loans" and ask for a refund of the interest and charges you paid, as well as the 8 per cent Ombudsman interest on top.

Make copies of all of the evidence before sending in case anything happens to them.

Also ask for the loan to be removed from your credit record.

You can find a letter template here.

Wait up to eight weeks to hear back from them. If you're not happy with the answer, or they don't get back to you, contact the Financial Ombudsman.

In a statement on its website, Peachy said: "Cash On Go Ltd filed its application for an administration order on 5 March 2020.

"The Company traded as Peachy and as Administrators we will investigate the reasons for the Company’s failure and any creditor is welcome to provide us with information."

The Sun has asked Peachy if it can share more information with us.

Peachy is the latest in a line of payday lenders to go under, following in the footsteps of Wonga and QuickQuid which collapsed after a spike in customer complaints.

It comes after stricter affordability checks were introduced to stop companies taking advantage of customers who can't afford repayments.

In 2014, the Financial Conduct Authority also introduced rules which banned payday lenders charging borrowers more in fees and interest than the amount borrowed.