Would you pay £200 for an outfit that doesn’t exist? That’s the bonkers idea behind ‘digital fashion’ – and even Gucci’s sold on it

This is not usual midweek behaviour for me. I’m standing in my garden, shivering in my underwear, as my neighbour takes my photograph. I am embarrassed in case anyone spots me acting like the Instagram diva I’ve never been before today. I’m also starting to regret not wearing more attractive underwear.

But the truth is that it doesn’t really matter, because in the final photo, I’ll be fully clothed. For a fee of about £50, a team of designers will dress my underwear-clad self in a digital outfit of my choice. They’ll then send that photo back to me so I can post it all over my social media.

Digital fashion has been around for over five years, but it’s only in the last couple of years that it has really taken off. In 2019, a translucent computer-generated dress made by ‘digital couture’ house The Fabricant sold at auction for £7,800, after Canadian tech executive Richard Ma bought it for his wife. Other companies like Tribute Brand and DressX offer a huge range of digital garments for prices ranging from £20 to £200.

And last month Gucci launched a pair of virtual neon sneakers for just £11.49, designed to be worn on social media. 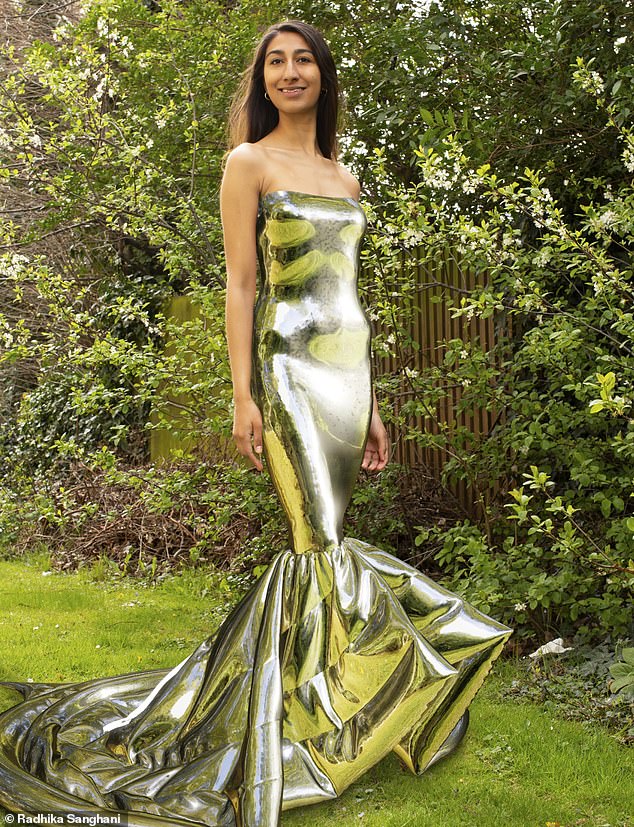 Radhika Sanghani went to her garden to take a picture in her underwear to try on ‘digital fashion’, including a silver ‘Sirek’ dress from Tribute Brand for £50 (pictured)

For absolute clarity, these are not real clothes — they exist only in the ether, as cutting-edge simulations created using 3D software. None of these pieces hang in an actual, real-world wardrobe.

To try them on, I simply download the Gucci app and pay £11.49. But as I attempt to ‘put them on’, the app keeps crashing.

The tech glitch makes me long for the ease of going to a shop and buying actual trainers, a feeling that remains even when I finally manage to encase my bare feet in the chunky 3D-neon creations.

The resulting photo is fun, but the quality isn’t great and it’s very obvious the trainers aren’t real. Still, I can see why they’re so popular with people who want to wear them to show off on social media, which is primarily what digital fashion is designed for.

‘Digital clothes are especially useful for modern professionals, anyone who needs to build a profile online,’ claims Natalia Modenova, co-founder of DressX, one of the biggest digital fashion companies. It sells collections from young fashion designers with backgrounds in 3D and digital fashion. 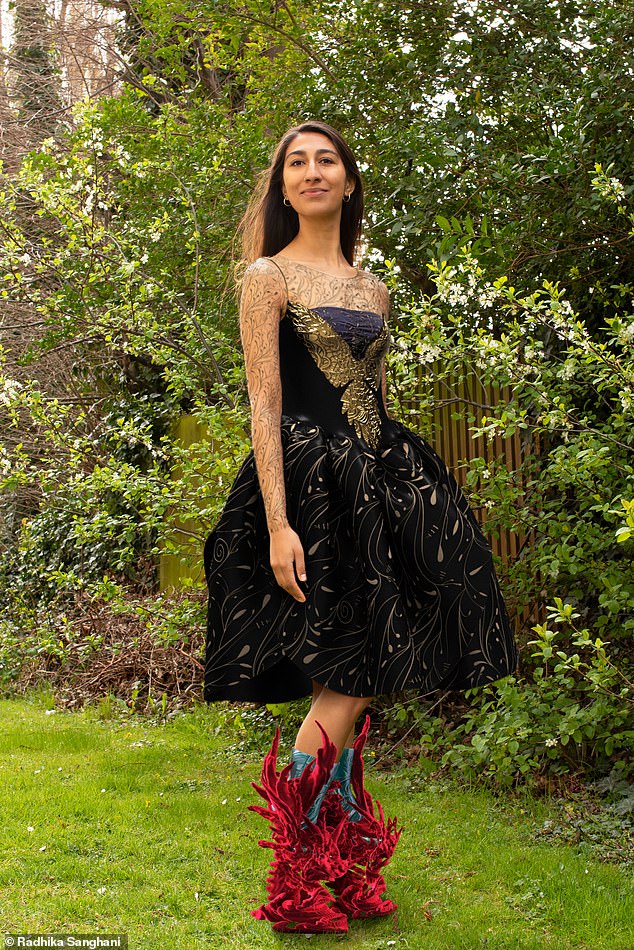 Digital fashion has been around for more than five years, but has taken off in recent years (pictured: Radhika wearing a £43 black and gold dress called ‘Fly’ by a ‘couture digital designer’ on DressX paired with some £36 red ‘shoes’)

‘Some business people now like to have new outfits for each virtual appearance and that is easily achieved with digital clothes. Professionals who travel a lot also see the value in digital fashion, saving a huge amount of space in their luggage by substituting some of their physical garments for digital ones.’

Now, I can’t imagine ever packing less for a holiday because I’ll have digital outfits to post on my Instagram instead — I still need something to wear to dinner! But that’s because my life isn’t dependent on how I appear online.

It’s also why I find the concept of digital fashion both fun and baffling. No matter how good the resulting pictures are, why would people spend hundreds or even thousands of pounds on an item of clothing they’ll never touch, let alone wear?

In my 30s, I do fall into the target market, but when I start browsing the digital outfits available, I’m not sure I’m cool enough to pull them off. Some of the websites just feature clothing that looks other-worldly, like outfits that an avatar in a video game would wear.

Virtual fashion in gaming is already a high-value market, predicted to reach £36 billion by the end of 2022. Players can change their character’s appearances, often by paying a fee, meaning games such as Fortnite, which has more than 250 million global users, reportedly earns about £220 million a month in virtual clothing sales (skins as they are called).

But DressX, which has more than 800 items available on its site, is much more like browsing Asos or Net-a-porter.

The whole point of digital fashion, I soon realise, is not to end up with a photo of you wearing something you could buy in Zara and go to work in; the idea is to be as over the top and outrageous as possible.

In the end, I select a silver ‘Sirek’ dress from Tribute Brand for £50, a £25 hot pink and black jumpsuit from DressX, and a £43 black and gold dress called ‘Fly’ by a ‘couture digital designer’ on DressX paired with some £36 red ‘shoes’ inspired by ‘thermodynamic quantity’ that look more like something from a science textbook than footwear.

I still can’t get my head around the fact I’ve just spent almost £150 on clothes that aren’t real, but after the fun of browsing and selecting what’s effectively a brand new look for me, I’m quite excited to see what I look like in them. None of them are outfits I can imagine myself wearing in real life, but that’s what makes it so enjoyable.

It feels like I’m living out a fantasy, like pretending to be Lady Gaga picking out a dress for the Met Gala or actress Alicia Silverstone in 1995 teen classic Clueless — when her character Cher Horowitz can’t decide what to wear, she turns to the virtual outfit builder on her computer to choose for her.

After picking out my outfits, I need to upload a photo of myself before I can buy them, so that their teams can ‘put’ the clothes onto my image. There are a number of rules about what kind of photo you can send over before the team put your chosen outfit onto it.

The image has to be a high enough resolution, you have to be wearing tight clothing or ideally underwear, you can’t have your hair or anything else covering your body, and the lighting needs to be spot-on.

I’m lucky my neighbour is a photographer, and after our chilly outdoors photoshoot, where I have to keep making sure my hair isn’t in the way, I send over the photos. I am told I’ll receive the finished images in one to three days. When they duly arrive in my inbox, I’m impressed. I can’t believe how well the 3D designers have ‘dressed’ me, using their high-end software.

It looks like I’m really wearing the clothes, and after all my fears of not being cool enough for this, I actually love how I look in the gold ballgown and metallic rubber dress — so much so that I send them to all my friends. ‘It’s a shame you’re not single because those would be great online dating photos,’ is one friend’s response, while my boyfriend tells me I look ‘Oscar-ready’. Another simply responds: ‘Wow.’

After all these compliments, I feel ready to post an image onto Instagram to my 7,600 followers, and the likes start rolling in. By the end of the day, I have over 450 likes — at least 200 more than I usually get on any other photo of myself.

It’s embarrassingly enjoyable to get so many compliments, and I can see why this trend is becoming so popular. It requires minimal effort, it’s fun and it provides instant gratification.

Gala Marija Vrbanic, founder of Tribute Brand, which launched in April last year and sells a limited range of cyber garments costing from £50 to £500, explains: ‘This is couture-like fashion you could wear in your bedroom now, and it looks better than anything in the physical world.’

She believes it appeals because ‘of the look, the zero-waste factor and the no size approach.’ 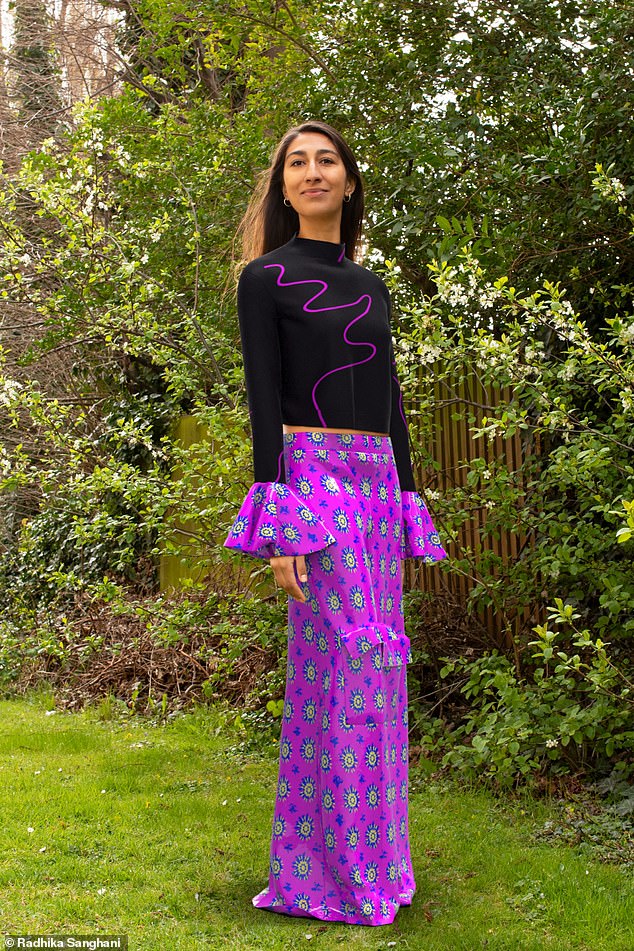 Many of Tribute Brand’s offerings are sold out, despite the fact that, of course, these creations don’t actually exist. But selling out or capping their offerings is something cyber fashion collections often do to maintain an element of exclusivity.

Gala is amazed at how quickly their company has grown in the past year. ‘At the moment, digital fashion is getting a lot of attention, and this is probably helped by the pandemic. But I wouldn’t say this is a trend. For us, this is an evolutionary shift for the whole fashion industry.’

DressX, which launched last July, has also had a good year. The company now has more than 1,000 regular clients and calls itself the ‘biggest digital fashion retailer on the market’, with around 70 designers on board. Yesterday, the company held a digital fashion show to launch 20 new dresses designed by Alexander McQueen’s nephew Gary James McQueen, former head of textiles at his uncle’s label.

Her co-founder Daria Shapovalova adds: ‘And of course, the pandemic has accelerated the growth of the digital fashion industry by highlighting both the issue of sustainability, overproduction and overconsumption, as well as increased online presence due to lockdowns.’

All of the founders of the digital fashion houses I speak to believe virtual clothing will only continue to grow as it hits a widespread audience — something Gucci’s trainers will definitely help with. ‘As it becomes more mainstream, the “why would anyone buy this?” questions will disappear,’ predicts Tribute Brand’s Gala.

As a store-loving shopaholic who began her foray into digital fashion asking that very question, I can see what she means.

I can’t imagine ever getting to a place where I purchase digital fashion instead of actual clothes, because I just don’t have enough use for it. Plus, I’d rather spend money on looking good in real life, rather than on social media.

But at the same time, if I need to post a photo of myself on my Instagram for a particular reason, such as to publicise my next novel launch in January, then maybe I would consider a virtual outfit. Even if it is just for the likes.